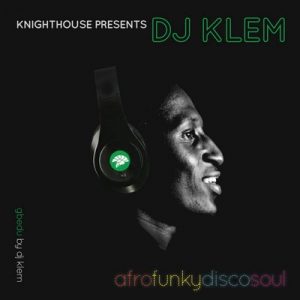 Let me just start by telling you that this is a full on HYPE post. The difference however in this case is that this is a deserving kind of HYPE. I will not ever hype something that was not totally worth it – DJ Klem‘s Afrofunkydiscosoul is totally worth it – and the interesting part is, wait for it, wait for it…. It is totally FREE!!! Music this good should not be free, there should be a law against this BUT thankfully, I don’t write the rules books.

This – Afrofunkydiscosoul – is the second release from award-winning Nigerian producer and Red Bull Music Academy alumni, DJ Klem (real name Clement Kponu) – his first record being the critically acclaimed Six8Ten EP from last year – and it features some of the best and most promising artists to come out of Nigeria this year. DJ Klem’s Afrofunkydiscosoul draws together established acts such as Wizkid, Sound Sultan, Sauce Kid, Mo Cheddah, Zara and Keland combines them with emerging artists like Iye, Teeklef, Funbi, Efa and Myst to make this album the best album, hands down, out of Nigeria so far in 2011.
This record gives you exactly what you expect when you see the name “Afro-funky-disco-soul“. Somewhere in that title should also be “Hip-Hop” but after trying many variations myself, I see that there was no way it could be fit in.

DJ Klem’s production shows so much creativity and such a diverse body of work like this one can only be indicative of the constant growth and change in the Nigerian music industry. He was not afraid to try something new and “new” turned out to be great. A friend of mine said after listening to the album “It’s a great album. I am not sure if it is great because it is different or it is indeed great”. Whatever the reason, this record has the power and dexterity to do for DJ Klem what So Far Gone did for Drake last year. OK you get the analogy right? But enough with the rhetoric, let’s get right into the music.

I was hard pressed to pick my favorite track on the record but I had to pick unfortunately and so the honor goes to “Disco Boogie (Eniyan Gidi)” which features emerging singer – with the bestest voice I might add – Myst. As the name implies, what Klem does on this song is bring back Disco from the 80’s and makes it new century worthy with lush guitar licks, horn arrangements, hand claps and a sick bassline. Myst infusing Yoruba into her lyrics makes the song even much more enjoyable and gives it a right sprinkle of Afropolitanism. I was born in the 80’s so I missed the disco era by a bit, but I have seen the movies and heard the songs and this is so skating rink, gypsy pant, crazy hair, competition worthy. I can so envision it and if there was ever a video, it should be the only direction/concept they could possibly take. Listen after the jump.

Our second pick on this record was rather obvious and its none other than “Footprint” which features Teeto Ceemos on the verses and Iye on vocal duties. I am in love with the beat of this song, there’s just something about how calm the musical milieu comes off and how the synthesis of each instrument is very clear and sharp – from the keyboard chords to the drum patterns to the horn arrangements. I am more impressed with Teeto’s rap on this song, the story behind each verse, his flow – understanding that he did not need to lay it on extra heavy or thick. I love it. I will be remiss though if I don’t say that Iye on the chorus was yet another testament to DJ Klem’s genius in putting together the best artists for each song. Yoruba never sounded so sexier than with Iye on this chorus.

This third pick was also not that hard to decide because… well I would not be a good reviewer/writer if I did not mention this song and just have you listen to it for yourself. “Journey Into Sound” featuring Sauce Kid and Phenom is exactly just that; a journey into sound that you do not hear on the regular, anywhere around the globe. It’s a really beautiful sound with lush synths, electronica elements, properly-used vocoding and thumping drum machine kicks and I’m hoping it gets maximum air play on Nigerian mainstream radio. It definitely gets my vote for best rap song and best production on a rap song. I have never heard Sauce Kid sound better, he went hard and I am not very familiar with Phenom but he held his own as well.

Now comes the hard part – because I feel like I am doing injustice to all the other songs I will not be mentioning on this review but I can’t very well talk about every song. We’ll be here for far too long otherwise. I apologize to all the other great artists on Afrofunkydiscosoul who we’ve failed to mention. You all did a fantastic job on this album and I doff my hat in accordance. This is sooooo hard so how about I plug two other songs from this record that are oh so worth mentioning without talking too much about either?

The first is “Farabale” featuring Yemi Alade and Efa. Yemi kills this song – the beautiful singer brings chills to my body every time I hear this song – and as far as I am concerned, she wins the contest for best female singer in Nigeria off of this song alone. The melody is ridiculous and I dare you to not hit the repeat button on this song. I DARE YOU. Rapper/Singer Efa is also not overshadowed though – his cocky swagger (yes, I know I used the word swagger, sue me) is on point – the only way to be on this kind of song.

The last – but definitely by no means least – song worthy of our mention just makes me dance. Come to think of it, any song the self-proclaimed Young Fela, Wizkid is featured on lately has the ability to do just that. “Let The Music Play (Remix)” which also features Zara and Myst is no exception. I don’t need to say much really, just listen and get to dancing…

Did I mention that this album is FREE? Certified G.O.O.D Music. DJ Klem is definitely a producer to look out for and one you should be fortunate to work with. Get to downloading ladies and gentlemen, ENJOY – Afrofunkydiscosoul is certainly the BEST album to come out of Nigeria so far in 2011…Download: DJ Klem – Afrofunkydiscosoul

Till the next time,

497 comments on “We Plug To You… DJ Klem – Afrofunkydiscosoul”