Home » Reviews » EP Reviews » We Plug To You: Solar Taxi – She Dies With Beautiful Teeth EP 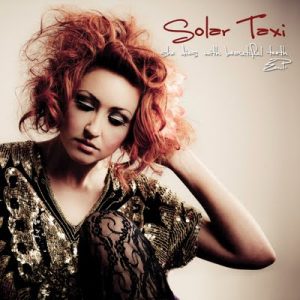 If you are interested in new age electronica music or just some good electronic band music then listen up because Solar Taxi is the band for you. I am one to listen to all different types of music so finding out about Irish band Solar Taxi was amazing. The instrumentation of their songs make them stand out from most other electronica bands and sets them in a league of their own. Imagine a band that hold onto their electronica roots but with a dash of pop, a hint of alternative, a touch of folk – and there you have Solar Taxi.
Solar Taxi is a 4-piece Irish band made up of superb vocalist Aisling Browne,Peter Vogelaar – on bass and production, John Foley on drums and Jamie O’Hallorohan on lead guitar. The band came to life properly in 2010 with a relentless string of tours and gigs all over Ireland as well as the release of a number of singles and remixes which have gotten thumbs up from the likes of Tom Findlay of popular electronic duo Groove Armada and legendary electronic producer/DJ and remixer Timo Maas.
She Dies With Beautiful Teeth is the brand NEW EP from Solar Taxi which I find is suitable for every mood. The EP has only 4 tracks but those four tracks are just right – the mood of each song is different from the next and the lyrics of each song never quite follow a similar route, pattern or concept which goes a long  way in displaying the very different styles the band can conjure up – each track displays the abundant amounts of talent Solar Taxi possess. Their style is quite unique and even though bands like Goldfrapp and Led Zeppelin can be stated as amongst their influences, one word I would use to describe Solar Taxi  is (refreshingly) original.
On the EP’s opening track titled “The Fool“, you are given a feel of their dance electronic styles and the bass guitar-led musical backdrop is very well complimented by the vocals of Aisling Browne and vice versa. “The Fool” uses a mix of synthesizers to give it that whole feel of a 70’s/80’s dance record while accompanying those with thriving drum and bass guitar arrangements to give the track a really funky feel. The tone of Aisling’s voice also adds to the song’s funky feel while adding quite a soulful element to it – her voice compliments the style of the track really well.

This next track “Glass Hearts” has a totally different feel compared to the first track or anything else on the EP. From the word go, we are greeted with heavy guitar arrangements which highlight the raw talents of Peter Vogelaar andJamie O’Hallorohan – their guitar solos mid-way through the song are also worth mentioning. The introduction of synth chords to the guitar arrangements usher in a hauntingly ethereal vocal performance from Aisling Browne and with lyrics like “you wear your glass heart on your sleeve“, “Glass Hearts” makes for quite the relatable song. Again the synthesizers and the guitar give the song a bit of a glam rock feel – similar to David Bowie – but still keeping it contemporary.

“Peachy Peach” takes the band back to its funky side with a distinctively rockier edge to it. The song also has a psychadelic feel to it from the use of a Sitar which you can hear all through the song. Peter Vogelaar goes hard on the track making the song a winner for bass lovers. Aisling displays her vocals abilities especially well on this song and after the acoustic “White Lights” which is the final song on the EP, her vocals shine through the most on the rock-infused “Peachy Peach”. Out of all the song on the EP, this track has to be my favorite because of the bass – it makes me want to get up and dance and to be honest, ever since I heard it, it has been stuck in my head.

Listening to this EP immediately makes me want to put on my wellies and head out to a music festival (with Solar Taxi playing of course) amongst other things – all the songs just give you that great festival feeling. These songs also made me want to throw a big BBQ party under the sun – just partying, dancing and great music. All in all, the songs give off a great vibe and I thoroughly enjoyed the EP from start to finish. The songs also give a chance for each band member to shine and show their immense talent from Aisling’s vocal dexterity to Peter’s production to the instrumentation of both John and Jamie. The band have landed firmly on their feet and know exactly where they are heading to, they are steadily making their mark on the Irish music scene and have set themselves apart from most other bands out there with this EP. With a full length due in 2012, next up for the band is possibly world domination and we’re fully backing Aisling, Peter, John and Jamie – Solar Taxi – to do just that!

One comment on “We Plug To You: Solar Taxi – She Dies With Beautiful Teeth EP”