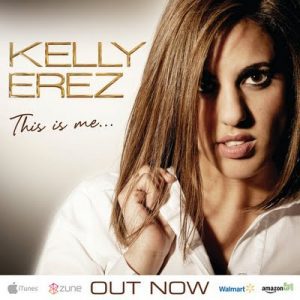 The best ones are unsigned… This is my professional and one might add very opinionated position. I have been doing this for about two years now, receiving music daily from people across the globe and this is just what I have found. The music industry as we have it now will be so much better, if we could get a lot of our unsigned artists signed and on the radio. Maybe then radio stations will not have to repeat the same songs every hour on the hour

But I digress… If there is one sect that is particularly lacking in the industry right now, it’s the R&B sector – more precisely the female R&B sector. They seem to have died with the start of the new decade, giving way to only Pop artists and left it all – R&B music I mean – to their male counterparts. In this artist I plug to you today, there is definitely cause to be hopeful, we have a revival on our hands people, “R&B’s back” – said in my best Rick Ross imitation.

Kelly Erez is the beautiful, soulful, UK, needs to be signed already, R&B/Soul singer and songwriter that has me so hopeful for the music and for the genre. It took me all of one minute to agree to do this review when the boss sent it my way. If you know me well enough, you will know that’s mighty impressive as it usually takes me much longer to be convinced that an artist is worth reviewing. I am in love with this young lady’s voice and the soulfulness it carries. My first thought when I heard her was “Janet Jackson” (not Dance/Pop star Janet but R&B singer Janet), and its no stretch if you know Janet Jackson’s work well – think Janet Jackson’s “Anytime, Anyplace”. Its that nasal thing, where you know that the person is singing from the depth of their belly. It immediately grabs your attention, you want more, it has you repeating the song. But see me rattling on, three paragraphs in and still no song. My bad ladies and gentlemen – the good news is that you get to hear Kelly’s entire EP right here!

What you just heard is my favorite track off of Miss Kelly’s debut 4-track EP entitledThis Is Me. The song is called “Come To Me” and its just an awesome track that has a girl feeling all very emotional – the kinda feeling that makes you close your eyes and sing with everything you’ve got even when you know you have the worst voice ever.  This beautifully crafted keyboard-led number backed by sweet drum kicks is one of those songs that gets your attention and makes you listen to what she is saying and has you hitting the repeat button time and time again. Here is a woman not afraid to say she is sorry, she’s in the wrong, her pride got the best of her and she wants her man back. Its also got that old school feel to it (hence my earlierJanet Jackson reference). Tell me guys what do you think?

What you just heard is titled “Letters” – the first track off of this rather amazing EP. “Letters” is a heartfelt song, from a woman who has just realized that she needs to move on despite her obvious feelings still for the man. Vocally, Erez is amazing on this song – the strength in it and the sincerity it evokes all come through so beautifully. The accompanying piano strings of this song are also very great, actually I love that you can pick up every instrument on this song – the drums, the guitar, the cymbal and the culmination is really quite sublime and very well put together by the EP’s producer Natalie Erez who also credits as Kelly’s co-writer on the EP as well as her sister.

I must confess that my only complaint about this EP is that the range of the instrumentals do not vary. But that’s not exactly a bad thing, they keep it mellow and smooth allowing for her voice to shine through on every single song. Like you just heard on the track above “You Know Why”, her voice again as the focal point is just damn near perfect, and if the lyrics were different this is the kind of voice you want to have in the background when you plan that special date, that goes on as you guys find your way to the bedroom. But alas, she is saying bye to a guy again. It appears Kelly Erez was going through a very emotional period when she recorded this EP.

You know we had to end it big right? At this point, I think you must be sold on Kelly Erez already. I mean can you really argue against that voice? The final track we’re sharing with you but not in any way the least is “Hand On Heart” – probably the most soulful on the EP and leaves me with nothing much else to say. It’s a great song and her voice comes off so unadulterated and pure. I want to know what you guys think about this one.
“Every time, we touch I forget you are not mine, running out of reasons, cos we had our time”

For a debut entry, I think Kelly Erez has done amazingly well and I envision a really bright future for her. Already with regular Track Of The Week features on the BBC Radio network (including BBC Radio 1Xtra & BBC 6 Music) and Zune Marketplace amongst others as well as a staple at the Top 5 of the Reverbnation UK R&B/Soul Chart since the release of her debut EP; I see nothing but greatness for this great singer.
Her passion for music is immense and clearly evident in her work and so is her respect for the art. I look forward to her reaching the top of her career and we over here at WE PLUG certainly certify her as GOOD Music. You can download her EP for FREE via her Facebook or Reverbnation pages or you can support Kelly Erez by purchasing the EP below for under five pounds – the retail release comes with a bonus fifth track titled “They Long To Be (Close To You)” that is 100% worth every penny.Kelly Erez will be playing her second London headline gig of 2011 on September 22 at Hoxton Hall Theatre and I would implore you to get your tickets NOW and go see this amazing talent LIVE!

Till the Next Time,
PEACE, LOVE and GOOD music.
Neefemi