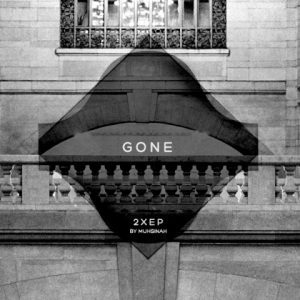 Independent singer, songwriter, composer and producer Muhsinah – pronounced Mu•see•na – is back after a long break away from the music scene with a brand new fourth EP titled GONE which she recently released on July 20 for her 28th birthday. The Washington DC native has already performed in front of President Obama at his homecoming inaugural ball in 2009 alongside veteran Chicago rapperCommon and has also been nominated for a “Best Vocal Performance” Grammy Award for her work with Hip-Hop/Soul duo The Foreign Exchange. You simply cannot categorize Muhsinah into one genre or box as I found out when I listened to Gone. I found it difficult to place her but after listening to her a few time, I came to the following conclusion: her music and production are very much Electronica/Indie/Experimental but her vocals and lyrics are 100% Soul music and it’s therefore no surprise that Muhsinah’s dexterity and style have attracted many audiences and acknowledgments such as this one from Radiohead’s front man,Thom Yorke.

Gone – this free 6-track EP tagged as a double Urban/Surburban EP – goes an extensively long way to show us exactly how much of an exceptional talent Muhsinah is in case we may have forgotten or didn’t already know. She wrote, arranged, composed, produced, performed and mixed every single record on the EP on her own. The amazing thing about Gone is that it’s a double EP as I alluded to earlier – it is two EPs in one – in a way that I’ve not come across before and in Muhsinah’s very own words, “the ‘Gone’ 2xEP is essentially 2 EPs in one – (Urban & Suburban) where I take 3 songs ideas and interpret them based on my early experiences in D.C. and Virginia. Hope you enjoy“. Rather clever, wouldn’t you agree? Each track on the EP is just so different from the next and each song has it’s own uniqueness and distinct style but Muhsinah does not stray away from her Indie and Soulful roots. Each song tells a different story in the 28-year old’s life which makes it easier for her fans to relate to her.
The first song we are greeted with on Gone is titled “One“. It starts off with simple drum kicks and snapped-fingers that instinctively catch your attention and gets you bopping your head and then glorious synths take over and you hear her gripping vocals with the amazing wordplay “you’re the dream I dont want to be over“. The synthesizers used all over the track beautifully compliment the bass and the tone of Muhsinah’s voice. The song has an R&B feel to it despite the experimental backdrop – possibly due to the mellow and not too heavy bassline and while listening to this song, you can hear the “Urban” influences and inspiration behind this song “One”, listen below.

This next song “Till I’m Gone” is on a completely different wave length compared to “One”. Heavy synths immediately hold your ears captive from the start and then the thumping drum arrangements come rolling in along with Muhsinah’s vocals. Muhsinah embraces her Electronica/Indie roots with this Alternative-Pop record and it’s such a beauty to see her show great versatility by switching from edgy R&B to Indie-Pop at the drop of a hat. The wordplay and menacing drum patterns on “Till I’m Gone” create quite an aggressive and fiery feel to the song and you can feel the strong emotion running through the track – definitely worth a few listens below

“Down To 1” which you’re about to listen to is the Suburban interpreation of the song “One” which you previously heard and while they are the same song in that they have the same lyrics, they are miles apart sonically. Where “One” gives off an R&B feel, “Down To 1” is more of a Indie/Rock record – you can just hear the electric guitar strings flowing throughout the track especially on the bridge of the song and those  fast-paced drum patterns are undeniably and 100% “Rock and Roll”. Although “Down To 1” and “One” are indeed similar, Muhsinah has cleverly interpreted the song in two different ways that you might not ordinarily  catch the similarities unless you listen properly.

Muhsinah has cleverly put together two EPs in one, giving the listener two different sides to her that they may not have heard or felt before. I think the fact and feat that she has produced, composed, written and recorded this EP all by herself is one worthy of a few mentions and will give the listener a feeling of a direct connection with the ‘Golden Girl’ herself. Whilst listening to the EP, I could feel her emotions distinctively on each track and most especially on “One”. It has to be my favourite track on Gone because of it’s rather mellow nature and tone. Regardless of whether lyrics are repeated, each of the six tracks on this EP has a distinctly different story that Muhsinah tells exceptionally well and allows each listener to interpret and relate to in their own specific way. Her gripping vocals and unique voice on this EP will captivate audiences who listen to a varied array of music – from R&B to Soul to Pop to Indie to Rock to Electronica and whilst each sound on the EP varies between genres, Muhsinah vocals and lyrical dexterity remain consistently constant – always doing each song 100% justice.
Download: Muhsinah – Gone EP
Find out more about Muhsinah: Facebook // Twitter // Website
Sade ‘Sweet Fashionist’ Nuga