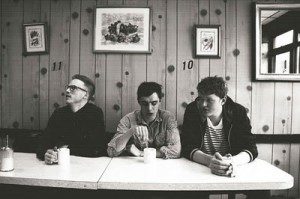 Not the biggest Indie or Electro pop fan but I do appreciate good music when I hear it and Waylayers make good music! The three piece London based band came into existence mid-2009 and since then have steadily gained the attention of fans everywhere. Their Electro pop sound or as they like to call it – “Atmospheric Pop” – keeps them current and relevant in today’s music landscape but also goes a long way to widen their existing fan base plus it does help that they pull off their sound remarkably well. With tracks that echo in your head long after the song is over and gloriously catchy hooks, this band is set to grab the attention of a lot more ears at an alarming rate! Although formed in the way most amateur bands are, the sounds of the Waylayers goes past their early beginnings with the great level or artistry and professionalism that is put into every track.

I cannot say that their sound is different because it isn’t but it definitely is fresh sounding when you look back on the sounds that we have been bombarded with over the last two years. The sound of Waylayers feels like a cross between the electric sound of The Killers, Keane, and the Kasier Chiefs with the vocals of Chris Martin, but you listen closer and it sounds a bit like Moxie Black too (or maybe it’s just me). They’ve got all the underpinnings of a good Indie band while drawing on bits and pieces of Britrock which has led to some pretty top tracks. They stay true to their genre and keep our feet tapping and head bobbing.

Every track that I’ve heard from Waylayers kicks off nicely but for me, the songs that get your feet tapping the most and really grab your attention are “Hear No Lies”, “Weightless” and “Farsighted”. I’ve heard 9 tracks from this band and while they are all really good, I’d like to point out these three tracks in particular that stood for me and got my feet tapping to the melody the most!
“Hear No Lies” is their first official single from their EP Weightless and rightly so! This track goes in from the get go with brilliant Synth & Electronica sounds from start to finish. You really get a feel of the Electro Pop vibe in this song and the catchy and very true hook definitely make this track memorable! This is one track I had on a constant loop from the first hearing! The upbeat drum kicks keep you bopping your head for the duration of the track while the vocals are so on point and create an amazing build up at different parts of the song all together keeping it very lively. The interesting melody of the track leaves you wanting more which will explain me having it on constant repeat after my first listen; let’s see if I’m alone on this!

This second track, “Weightless” is another captivating song that gets you into it from the get go – with the excellent use of synth keys, lush drum patterns and guitar strings all gelling together beautifully. The simple catchy hook doesn’t hurt either but adds to the overall flow of the track and keeps you tuned in right to the last beat. What stands out from this track is the clean fast paced melody that takes you through the track. The production on every song is so professionally done that it’s hard to believe that is a band that originated from the bedroom of one of the band members.
I do have to admit it sounds a lot like a Coldplay song and the lead vocalist’s vocals don’t help either with trying to create a clear distinction. However that’s the thing about it – three boys that started out of a bedroom a year and a half ago can create a track that can be compared to the likes of Coldplay and sound amazing definitely says something! That is what gets me about this band… their music goes past their recent beginnings. Their sound isn’t exactly different but it’s refreshing, relevant and done right. Every single track is tight and very well (and professionally) produced and crafted.
“Farsighted…” is the third song that stuck out for me from this London-based trio. It’s hard to describe the sounds you get from this track but it just sorta picks you up. The thing about Waylayer’s music – and Electro Pop in a wider picture – is the fusion of so many odd sounds in a way that creates a melody that’s hard to take apart but pleasant to listen to and for me that’s what this track does. I also enjoy the change in tempo as the hook comes in; it catches you unaware and zones you back into the song. All the little quirky sounds on this track really come well together to give this track something hard to describe but interesting to listen to.
Like I said earlier, there isn’t anything remarkably different about the sound of this band and it isn’t anything you haven’t heard before and that is not a bad thing but what is remarkable is just how right they get it! It is music that is just good and truly enjoyable! Waylayers are definitely a band to watch out for, there has been little talk of them releasing an official album yet, but if these few tracks are anything to go by then you can expect nothing but Good music from them! PLUS if these three tracks aren’t enough proof that this band is totally awesome and heading in the right direction then please check out these other tracks from the band which also stood out for me – “Big Machines” and “Sinking In” which are both from the Weightless EP, and “Like We Used to” which is from week four of their Facebook Pledge.

You should check out their Facebook Page for their Facebook Pledge which involves them writing and releasing a new song every week for the foreseeable future – their latest and sixth song to be released via the Facebook Pledge is the brilliant Pop/Dance song “S.O.S (Leave Alone)“. They’ll also be playing two London gigs in October at Notting Hill Arts Club (11/10/11) and at The Borderline (15/10/11) with a 4-city tour planned for Germany at the end of the year so definitely keep your ears peeled for Waylayers.