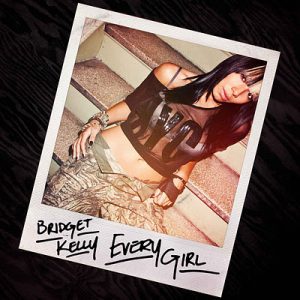 I know nothing about music. That’s the conclusion I came to after I listened to Bridget Kelly for the first time today. I mean, how do I call myself a music connoisseur of high caliber and not ever have heard of Bridget Kelly. I’m just saying that if you would like to revoke my card right now, I would be totally OK with that. However, better late than never right? Exactly, right and just in case you are like me and you had never heard of Bridget Kelly – in all likelihood, you probably have but maybe not the music – until you came through here, let me introduce you to the sultry 23-year old singer, who quite frankly is probably one of the freshest voices I have heard in the R&B scene, all year long!

Bridget Kelly was born and raised in the neighborhood of Chelsea in New York City and began singing quite early, she recalls and was further determined to make music her career path during her education at the prestigious LaGuardia High School for Performing Arts in New York City. She met her management team in 2008 – who later that year had a once in lifetime meeting with Roc Nation’s A & R Team — who went on to sign BK as she is fondly called her to a recording and publishing deal… The rest, as they say, is history!
A lot of you will recognize BK as the fill-in for Alicia Keys when Jay-Z has performed “Empire State of Mind” everywhere from MTV Europe Music Awards to Saturday Night Live to the Yankee Stadium. Now she’s stepping out from behind Jay-Z’s shadow and doing her SOLO thing with the release of her debut EP titled Every Girl and its highly rated on here. The EP is quite cohesive and Bridget Kelly is edgy, soulful, fresh, fun and all that makes for a great debut. But I reckon I’ll let you be the judge on this, so let’s get to it right?
What you just heard is called “Seek and Destroy“. Hands down, my favorite song on Every Girl without question and the best song on the entire EP really. The song – written by Terius Nash popularly known as The Dream – reveals that edginess in BK which I mentioned earlier. I love that the Shea Taylor-produced track is not as heavy as one might possibly expect with the lyrics – what with all the cursing and all – he brilliantly employs light drum patterns and guitar strings as the underpinning musical milieu for the song. The song was not intended to be angry, just assertive and it comes across so flawlessly, with BK’s voice still sounding as smooth as a baby’s skin. You already know this is about to be women’s anthem across the globe, right? I have imagined playing it for the next guy myself, just so we are clear and play our positions right.

I bet most of you recognize this track already. The story goes as follows… Odd Future’s R&B leading man Frank Ocean wrote “Thinking about Forever” in particular for her and his recording of the song which was leaked was just a reference track – but you already knew that I’m sure. The problem with that is her version will continually be compared to his but I don’t see it as an entirely bad thing because I think her version is so much better than his frankly. I know most of you might disagree, but give it a chance. There is something about her voice that perfectly connects the song, which is simply just beautiful to my heart that I have to close my eyes and just listen to the song.

This one here titled “Every Girl” – the song that inspired the EP title – is another song that excellently shows BK’s confidence and shows off her voice quite well. TheJames Fauntelroy II-written track tells us about a girl trying to fight for her man’s love by locating every other girl who has ever loved him and hurt them and while I am not sure how that helps her get her man, it definitely does make for a brilliant song. I would have sworn that these were words of a woman who was hurting and did not want to lose her man, so I find it interesting that, this and all the songs on this EP were written by men, and yet they connect to women’s thoughts so well. Maybe men really do understand women better than we think. The production – laced with catchy drum patterns and synth keyboard patterns – by Reginal “Sycience” Perry is quiet excellent and lush.

What you just heard is called “In the Morning” and I have to first say that Shea Taylor who produces this track and also produces the first two tracks we plugged on this feature definitely deserves a mention – the bass-heavy drum patterns provide quite the dramatic and fitting backdrop upon which BK delivers beautifully. Secondly, no one had to tell me Neyo wrote this song – you can tell immediately – plus you can hear his voice in there, if you listen carefully. Lastly, I love this song, I really do. I can definitely relate and not like I will ever drunk dial anyone, but I definitely have been tempted to and I understand how my pride won’t let me say what I really feel. Its kind of like a cleaner version of Drake’s “Marvins room” you know (the late night drunk calling), evidence that sharing feelings while drunk is not gender specific.
“I love him, but I can only say it when I’m drunk and I’ll deny it in the morning”

I’m afraid that’s all we’ve got time for today ladies and gents so what do you think of Bridget Kelly’s Every Girl EP so far? I really like this EP, it’s very cohesive and a really strong debut effort by Miss Bridget Kelly. Personally, I would have loved to see that she wrote these songs but getting the likes of The Dream and Neyo to pen some really decent tunes for you on your debut offering is pretty dope in itself – you can’t be mad really – PLUS the fact that she did not write these songs and is still able to deliver them, not just musically but also emotionally as well, is actually kind of awesome. The Roc Nation signed recording artist definitely shines through in herextended play introduction and we at WE PLUG cannot wait for her debut album because if it’s anything like what we’ve just heard – which it will be – then it will be an amazing debut from the NYC native. We will be following and supporting her career every step of the way and wish her all the best.Download the 8-track Every Girl EP already >> its FREE // Alternative Link

Till the Next Time,

405 comments on “We Plug To You… Bridget Kelly – Every Girl”