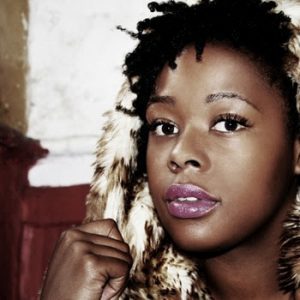 I first heard and saw Martyna Baker back in the Autumn of 2009 – it was a showcase for BBC Sound of 2011 nominee Daley, she was one of the two supporting acts to open for him – and despite the annoyingly noisy crowd and reception at the otherwise intimate Ruby Lo venue in London, Martyna Baker, along with her guitar, delivered a beautiful selection of acoustic songs that simply just blew me away. Unfortunately or otherwise, in the two years that have proceeded after that performance, I haven’t seen or heard much of Martyna or her music except for news of an odd gig here or there but fast forward to this week and all that seems rather irrelevant because Ms. Martyna Baker has – out of nowhere – gone and released a short but sweet “introduction” if you will of her music to her wider audience by way of a 5-track EP simply titled Martyna Baker – The Demo’s and can I just say right off the bat that it’s an AMAZING debut EP from the London-based singer, songwriter and musician – without question!

As you know, this would usually be the point where I tell you a bit more about Ms. Martyna Baker but whether by design or simple coincidence, there is not one single biography anywhere online about Martyna – not on her Facebook page, not on her Tumblr, not anywhere – and on some level, I guess you could say that is a good thing because we can simply just focus on the music and infer from the music about the artist or person which is a much more delightful if not a much more insightful proposition PLUS it helps that the music that Martyna has chosen to put out into the world is nothing short of exceptional.

Martyna grabs your attention and doesn’t let go of it from the very first song on this EP – the stunningly well-written “Love Fast” which is produced by one Dan Radclyffe aka Utters – which Martyna describes as her “baby” and rightly so because it is one gem of a record. “Love Fast” is led by lush slow building keyboard patterns and commanding drum patterns which are woven in and out of each other rather brilliantly by Utters and are all brought together beautifully by Martyna’s beautiful and compelling vocals. Listen below to “Love Fast”

From the first track on the EP – “Love Fast” – we’re gonna jump right into the final song on Martyna Baker – The Demo’s titled “Don’t Stop” which has to be my favorite song on this 5-track EP. Production on this one is also courtesy of Utterswho does an incredible job of providing just the right musical milieu on not just this song and “Love Fast” but also on the entire EP for Martyna to beautifully express her lyrics and showcase her vocals. “Don’t Stop” starts off quite dark and melancholic especially with the texture that Martyna’s vocals take on this one and the somewhat eerily spacey musical backdrop – it’s nothing short of captivating and you cannot help but hold on to every single word Martyna’s uttering on this record – but it ventures into uplifting territories at each chorus with the final hook giving the song it’s final victorious declaration – “Don’t Stop“.

I’ve now got one more song to share with you – as part of this feature – which is always the difficult disposition when you’ve got a record as good as Martyna’s. I’ve gone for the song titled “Don’t Take My Eyes” which sits comfortably in the middle of this EP but in reality, I could have gone for any of the songs on either side of it on the EP and would’ve still been happy with my final pick – all these songs from Martyna Baker are that good and it’s that simple! “Don’t Take My Eyes” is once again superbly produced by Utters and is backed by what sounds like xylophones as well as soft percussions and guitar strings upon which Martyna sings so effortlessly and so brilliantly.

What can I say in concluding that the music you’ve listened to so far has not already told you? Not very much, I can assure you and although not even featured on this feature, the other two songs that complete Martyna Baker – The Demo’s– “Daydreams” and the Sam Dixon-co-written “Hold Hearts” – are very good pieces of work in their own right and are certainly worth every mention. It seems thatMartyna and Radclyffe (Utters) are unto something here, the chemistry between these two simply oozes out of every record and you cnanot help but continue listening. I can only hope that now that we’ve been blessed with this “introduction” to Martyna and in many ways, to Utters (or at least in my own special case) who has served up a delicious musical milieu on this EP, that we will continue to be blessed with music from these two, whether individually or working together – it seems only fair to the world! Make sure you download the EP via the link below, it’s absolutely FREE and you already know that music this good shouldn’t be for free so get your DOWNLOAD on before Martyna changes her mind!
Download: Martyna Baker – Martyna Baker – The Demo’s (Free Download)
Keep Tabs on Martyna Baker: Facebook // Tumblr // Youtube
Until the Next Time…
Ayo Adepoju
Head of PR + Publicity @WPGM_PR // Founder + EiC @WePlugGoodMusic
Latest posts by Ayo Adepoju (see all)