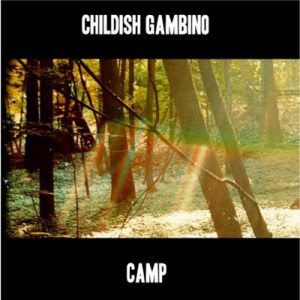 I’m disappointed I hadn’t heard of Donald Glover prior to receiving the link to his latest album CAMP and if you’ve heard of the rapper who goes by the stage nameChildish Gambino, you’re one up on me.

Born September 25, 1983, Donald Glover is an actor, a comedian, a writer and – adding to his list of talents – a rapper and a producer. He has attended the Dekalb School of the Arts in Atlanta, Georgia and also graduated from NYU with a degree in Dramatic Writing in 2006. No surprises there as Donald was a writer forTina Fey’s NBC series 30 Rock for two years and won the Writer’s Guild of America Award for his work on the show’s third season. He also starred in the popular US TV show Community as Troy Barnes as well as writing for Jon Stewart’s The Daily Show amongst other roles in TV and Film. With music, Donald started out in college dropping a few mixtapes here and there, and by few I mean many. His most famous project till date – the album Culdesac – was released last year and now we feature his brand new album titled CAMP. To be precise,CAMP is his fourth album but first commercial release which is scheduled for release on November 15 under Glassnote Records. Lest I forget, Donald also DJs under the moniker mcDJ and has released a number of mixes under this name. I ask is there anything this man can’t do? Let’s get into some of the amazing music to expect on CAMP, shall we?

We’ll start off with “Fire Fly” a track that sounds like it fits right in with the throwback rap music of the 90’s. Excellently placed as the album’s second track in its sequencing, “Fire Fly” is the perfect song to begin our review because it reflects perfectly where Donald is in his life right now and on this record, he draws major attention to how people doubted him in the past but now recognize and appreciate not only his music, but also Glover as an artist and musician – a celebratory number highlighting Glover’s hard work and perseverance. Lyrically, Donald shows major versatility with his witty lyrics and even occasionally cleverly taking jabs at himself. The vibrant musical backdrop – produced by Glover himself and his longtime collaborator, TV composer Ludwig Göransson is classic cruising music backed by grand “synth-y” keyboards, lush drum and horn arrangements and makes for a very well-rounded track.
Next up is one of my favorite songs off of the album and a projected future hit titled “Heartbeat“. The intro starts off with a pattern of piano chords and a kick bass drum, later joined by looping vocals from Donald rightfully building up anticipation for something the listener hardly expects. At the 0:49 minute mark, the composition completely expands – almost transforming – into heavy techno-driven instrumentals that prompt an instant head bopping motion from the listener. With such a sublime and very different production from Glover and Göransson, “Heartbeat” is easily one of the standout tracks on CAMP and sure to be a favorite for every listener. I really enjoy the way the song switches tempos while reflecting on relationships he has had with girls in his past in an almost Kanye-esque manner.

Let’s take a little intermission shall we… “Letter Home” – which stands as the shortest track on CAMP or rather an interlude – reminds me of a track you would hear from Drake. Regardless on this, Donald seems so sincere and personal in his delivery that it stands out on the album and I feel it is worthy of several mentions. The resounding arrangement of violin strings accompanying Glover’s lyrics and vocals seals off the track rather beautifully that I can only hope that the lucky girl for which “Letter Home” is for, gets to hear this.


Choosing the last song to plug to you from this album was a long struggle but I finally settled on “Hold You Down“. The saying, “write about your experiences” holds true for Glover and I’m amazed as to how he can keep talking – so openly – about his life while still consistently making good music and never compromising on its quality. On “Hold You Down”, he refers so poignantly to the struggles and stereotypes he faced while growing up as a Black kid that you really need to listen carefully to this one. The piano chords heard throughout along with those well-placed hand claps and subtle drum patterns as well as the orchestrated violin arrangements that carry the chorus and round up the track at the end are the musical pieces that bring this song together and give it that dark serious tone while Glover’s wordplay, delivery and sharp wit are sure not lacking on this song either.

The 13-track CAMP LP is clearly all types of dope with standout tracks that are worthy of mention bursting at the seams on this album including the album’s first single “Bonfire“ – boasting of limitless puns and a great beat, “Sunrise” with its choir-filled chorus and church-like effects, “L.E.S” with its melancholy instrumentals, “You See Me” and “Kids (Keep Up)” just to mention a few. CAMP – produced by duo Donald Glover and Ludwig Göransson – is definitely a solid album with clever, witty and personal lyrics created to match the album’s sounds and instrumentation effortlessly. It comes in late in the year but it just might be one of the best Hip-Hop albums you will hear in 2011 and hopefully, Glover ranks music atop his list of things to do as we sure can’t wait to hear more from this artist. Make sure you cop the album once it drops – via the links below.CAMP gets an A+ and a standing ovation from We Plug GOOD Music.
Purchase: Childish Gambino – CAMP (iTunes)
Keep Tabs on Childish Gambino: Facebook // Twitter // Website

One comment on “We Plug To You… Childish Gambino – CAMP”