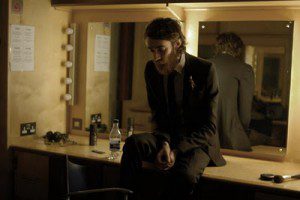 OK, I’m sorry but I just can’t seem to start this article in any of the conventional ways I know. I mean, right now I’m listening to a song by our featured artist and I just feel so compelled to talk about it right now! I just can’t wait to introduce this artist to you and we’ll get to that in a minute but first we just have to talk about this masterpiece of a song – which by the way is not on the album I’m featuring/reviewing (heaven knows why) but is none the less still worth PLUGGING!

“The Drowning” is the name of the very first song I am plugging to you from this artist, and not to sound too morbid or anything but if I was going to commit suicide or “drown” myself, it would have to be to this beautifully depressing song! I literally pressed play and that was it – I was utterly captured in his description of his shipwreck of emotions. He describes the love he shares with this person as an old weary boat, and how the water is gushing in and he’s more likely to drown but for her love, it’s worth it!!! If the film Titanic was cool instead of corny, it would have had this as its soundtrack. “The Drowning” – backed only by acoustic guitar strings – is so honest and deep, that it physically hurts to listen to but you just can’t bring yourself to press the stop button. The stillness in your mind it creates is just something out of this world and it’s almost like you would be quite happy to just sit on this boat he sings of while it loses its battle against the waves and just happily drown! I could really go on and on with my not so comprehensive descriptions of “The Drowning” but it might still never quite hit home so you literally have to press play below, perhaps more than once!

Phew! Now that I’ve successfully gotten that off my chest, we can now return to our regular scheduled programming. The artist we will be plugging to you today is the talented and dare I say it, awkward Keaton Henson! The 23 year old singer, songwriter, musician, poet and designer is really special for all the right and not so right reasons. First of all, he has performance phobia! Yes, he suffers from severe stage fright and has a problem with everyone staring at him – weird I know – so you probably will never see him performing live and according to his website, he “spends his time alone writing songs and sometimes drawing, he doesn’t like to talk about himself” plus can I just mention that Henson has gotten all this attention and buzz around him and his records without any professional management or promotion! He has his close friends – who believed in him and leaked some of his songs – to thank for his growing success and he is now currently signed under management toATC who are also responsible for the management of Radiohead, Dido and Kate Nash amongst others – he can only really go up from here!

Keaton Henson vaguely reminds me of the kid on the playground that would sit with his back to everyone and had this maddening love for a girl that knew nothing about his existence. Actually, his awkwardness reminds me a lot of Simon from the first season of Misfits but without the eagerness to be liked by others and his music style is strictly acoustic and very similar to Damien Rice but without the keys of a piano. I am especially glad to be plugging Keaton Henson – albeit slightly biased in his favor – because to be honest, music like his is what I meditate on! There’s just something about how honest and unashamed his music and lyrics are and in his defense – not like he needs one – he stated in a recent interview that the reason why he was able to write so openly was because he never thought the people who the songs were about would ever hear them. Well that’s fair enough because its working wonders for him and his listeners.

Dear… is his debut album – due to be officially re-released early 2012 after he self-released the project late last year – and was self-produced mostly from Henson’s bedroom after a recent tragic breakup. You don’t have to be a genius to know that the inspiration for this album is deeply rooted in the woes and defeat of love, every song is heavily streaked with the depth of his on-going pain which you also get a feel from with the texture of his voice. His vocals aren’t perfect but they are pain stricken and interpret the emotion behind every song really well. It’s the kind of voice that cracks and fades at all the right places and still manages to soothe and calm your soul. There’s a certain way he approaches a song that makes his sadness seem universal, almost like at that certain point in time what he’s going through is the most important thing in the world. Right, without further ado, let’s get stuck into a few of my favourite tracks from this album!

The first record I will be bringing to your attention to from this album is titled “Charon“. This song speaks so quietly resounding of the hardships of his break-up and how nothing makes sense anymore – we’ve all been here and that’s one of the reason why this song is so easy to get into and again his honest lyrics don’t hurt either. Personally, what really gets me into the song is what he does with the chords of his guitar from start to finish of this song. It feels like the gentle tugging of your heart that keeps you locked into the song while creating this beautiful melody which keeps the song alive through out its three minutes and fifty seconds! #PS I love how he blatantly tells us he’s no “Hercules” at the end just to remind us that he feels everything and he isn’t strong, the honesty though! Have a listen for yourself!


This second song I’m plugging to you titled “You Don’t Know How Lucky You Are” is Henson’s lead single – which is out NOW – from the album. On this record, he speaks so painfully but yet beautifully about the all the things he knows about his lover (ex-lover) that no one else does, least especially the new person she is with now. His ultimate question to her is, “does his love make your head spin?” and obviously this is the test of any true love – your head must spin! What ultimately gets you about this track is his openness – he talks about her quirky likes and dislikes plus the fact that she doesn’t like to talk about her dad… Henson knows so much about this girl and shows it excellently that you can’t help but feel the loss he feels – she is supposed to be with him and nobody else. “Small Hands” and “Sarah Minor” also on Dear… are very similar to this track lyrically, in that he speaks about the things that he knows and misses about this girl. It’s all these intricate details he sings about that give you a bit of understanding on just how much he loved this girl and how painful this void he now bears is. Plus, it also got me thinking on whether my own lover makes my head spin… hmmm???

The last track we will be selecting from Henson’s Dear… is “Flesh and Bones“, which in my opinion is a must listen! “Flesh and Bones” is a soulful song with so much pain and depth that it’s hard to take it all in, in just one listen. Thankfully, his acoustic style of music lets you really take in his beautifully written lyrics. “Flesh and Bones” speaks about his need for this other human being and how weary his body has grown from trying to make it on its own. He rips himself apart in the lyrics and I think it makes it that bit easier for the listener to share in his sorrow. He is totally consumed by this other individual, so much gloom and dread moves around him but all he can bring himself to truly worry about is the welfare of this other person that is no longer with him. His vocals on this track are untouchable, it’s so real! It’s almost like he’s so choked on emotions that he voice physically cracks at some parts but it somehow complements the story his lyrics tell. This is the sort of song you hear and automatically stop whatever it is you’re doing just so you can really listen. For me, “Flesh and Bones” is the heart of this album and really sums up what it’s all about. Hit the play button and partake in this addictive sorrow.

Two other songs that I think are worth checking out from this album are “Small Hands” and “Party Song“; Small hands is another song that I truly love, not for the song itself but for the beautiful lyrics in this song, he share with us again all the intricate details he knows about this girl but also how he wishes her to forget about him completely as he attempts to move on. It is your typical break up song but with great lyrics! If you get a chance, pull up the lyrics while you listen – it helps you get into it more. “Party Song” is a very errr… honest song. Lets just say if he killed his exes’ lover and the authorities heard this, he would be convicted instantly! But honestly, it is a very dark song that speaks of the sickness we all get in our tummies when we see our exes with someone new, Henson hits the nail right on the head with every lyric and ironically there is nothing party-ish about this song!

Keaton Henson is not an artist that goes in the like or dislike column, you either relate to it or you don’t; his music is deeply personal, opened and unashamed. He doesn’t strive to get fans or jump into a certain genre; he makes music about pain familiar to him and the things and people he knows about, it just so happens that his music is 100% genuine and heartfelt that the listener cannot help but be enthralled and captivated by it and can certainly relate to it. Sometimes listening to his music and lyrics makes it seem as though we’re reading his personal diary and it’s very intense the things he writes about, but what’s so attractive about it is the fact that we all sometimes feel this bitterness and sadness but will never openly speak about it or let be known; and now to stumble across music like this that boldly speaks about things we feel but won’t say is absolutely divine! And for me, it’s one reason why I can’t just get enough of Keaton Henson. You listen to his songs and the lyrics stay on with you long after the music has stopped.Keep Tabs on Keaton Henson: Facebook // Website // Vimeo