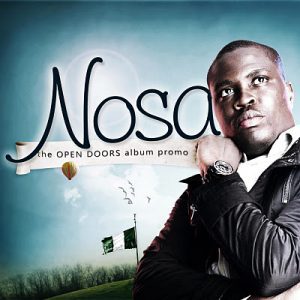 When a song sticks to you and won’t let go, it just will NOT let go – it keeps playing in your head, in your mind and in your sleep – in a good way. That’s how I describe NOSA’s (full name Nosa Omoregie) songs – it’s like a hug you don’t want to let go off. I don’t know if it’s his voice or his lyrics, his depth or the soothingness of his sound or maybe it’s all of the above; he is such an effortless and natural singer/songwriter and it is with great pleasure that we plug to you this refreshing and unique Nigerian inspirational neo-soul singer/songwriter – NOSA.

Born and raised in Benin city, Edo State in Nigeria, Nosa Shadrax Omoregiestarted out singing in the children’s choir in church and is majorly influenced by Gospel singers like Fred Hammond, he also credits his R&B influences to the legendary group, Boyz II men. He later grew to love Jazz and Soul music but his primary musical influential roots however remain Gospel and Afro-Highlife.

Nosa is an independent artist who has branded himself with the use of the Pidgin language in his music and he is making the pidgin language really “hip”. Lyrically with his songs, Nosa aims to first and foremost, inspire and encourage the listener to an epiphany of God whereas musically, he ventures to create a bridge between music genres and develop a unique merger of sorts without losing the inspirational touch. He also intends to place Nigerian music in a different and unique light as he incorporates ‘Pidgin’ English and gives it an avenue to gain as much notoriety asPatois.

With some of his songs, he has creatively super-imposed a soul tune on a Highlife production, a Highlife verse with R&B flavored verses while maintain a refreshing and soothing slant. It’s just all a potpourri of musical goodness. A favorite among a lot of African music blogs, Nosa has been likened several times to John Legend in style, sound and feel while comparisons with Asa will surely not go amiss.

First song up for review is “Always Pray for You“, the beautiful single that paved the way for him in 2009 with rave reviews from critics and a buzz that spread like wild fire. It got the attention of both Gospel and mainstream radio in Nigeria and even became the song of the week on Rhythm 93.7 Benin City, it also topped radio charts and became a fan favorite at other stations across the country. The message of “Always Pray For You” is exactly as the title suggests and on this song, he sings in first person about a loved one he would always pray for as they part ways – this song greatly encourages forgiveness and moving beyond differences. Nosa’s vocals are smooth and velvety on “Always Pray For You” as well-timed drum patterns keep the flow going and light piano drops play around and carry the melody of the song sweetly as well. Nosa creates a background harmony curtain with his vocals nicely. He climbs up an effortless falsetto at 1.40 seconds and climbs down and back up again throughout the song – Talent! He chants a prayer at 2.38, giving the song a creative break and bounces right back in with a lovely ending. Click play and don’t resist the urge to put it on repeat.

Always Pray For You by Nosa

The lyrics, the production, sound arrangement, and the vocals are all perfect in a soulful rendition that renders itself addictive to its listeners in this next song rightly titled “A Star“. One of the two of his recently released singles from the soon to be launched project titled Open Doors, “A Star” is a song that encourages the listener to explore their God-given talent and be the best they can be and on the song, Nosasings that every individual has been endowed with a gift and everyone is a star in their own right, only if they walk in their potential. “A Star” opens with Nosa’s hums and a “la la la” vocalization, he then jumps right into his pidgin rendition as fluid as can be. This song is very Soulful in sound and the musical backdrop again features the signature overlay of his harmonized vocals and piano chords. He stylishly drops some vibrato at the end of his lines, while he vocalizes his scatting neatly – this song is a star anyday!

A STAR by Nosa

Last but not the least, is the patriotic and positive “God Bless Nigeria”. A song that talks about the great and remarkable aspects of Nigeria as a country. This is a song that would surely make Nigerians in the diaspora get that nostalgic feeling over and over again. “God Bless Nigeria” is a positive song, a song that speaks good things, promotes unity, a vision of optimism about the nation. Catchy and up-tempo anthem-style drum rhythms introduce the song with Nosa ushering in as usual, his signature scats. His harmonies are strategically placed here and they are just simply mind-blowing. No exaggerations. Take a listen and be a witness.

These three songs we’ve perused are just a tip of the iceberg for Nosa. Nosa is an artist you should keep firmly on your radar and his forthcoming album, Open Doors is an album you should look forward to getting a copy of when it is officially released. It is evident that it’s that kind of album where the songs on it are like snowflakes, no two are the same. Nosa has come to stay for real, his music is a breath of fresh air from Nigeria – something different from the usual Hip-Hop-Afro-Pop – and even more so the gospel scene. Nosa is pure talent and his music really and truly markets itself. Open Doors is set to be released in early 2012.
Keep tabs on Nosa: Facebook // Reverbnation // Twitter