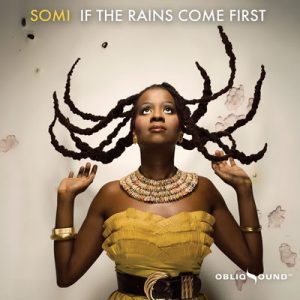 Happy New Year everyone and welcome to 2012. We hope to keep the trend of plugging G.O.O.D music to you as always. Therefore in a bid to start of the year with some much needed freshness, I bring to you music that smells like the sweetness of rain… We plug to you music from a Chicago-born East African lady of Rwandan/Ugandan parentage, who spent her early childhood in Zambia and is currently resident in New York. We plug to you SOMI.
I had always heard of Somi and came across some of her YouTube videos sometime ago but after an announcement that her 2011 Live album is being PRE-nominated for a “Best Jazz vocal” GRAMMY award, I decided to check her out some more and I was not surprised about the well-deserved pre-nomination plus she fits in just about right in that category of my preferred genres of music. Somi – an Afro-Soul Jazz Singer/Songwriter – is as multicultural and eclectic as they come. She sings in English and four East African languages and delivers her soft and airy melodies with ease. She calls her music a fusion of African and Jazz and refers to it as “New African Jazz”. I call it music for the mature and open soul.
Somi’s music is already gaining international attention because of her vocal originality and flair with plaudits from the likes of Vogue Magazine, NPR and Billboard.com just to mention a few. Her signature clicks and African vocalisms are reminiscent of Mother Africa–Miriam Makeba and her Jazziness, of Ella Fitzgerald and Nina Simone.Somi recorded her first live album in March 2011 at the legendary Jazz Standard in New York City and this record – Live at Jazz Standard – was released in the Summer of 2011. The music we will be plugging to you by Somi are from this live album and her previous (3rd) studio album If The Rains Come First which was released under independent label ObliqSound in 2009 and landed at number two on Billboard’s World Music charts. She has also collaborated with Paul Simon, John Legend, Mos Def, Idan Raichel and Cassandra Wilson among many others in a career that spans over seven years.

Let’s kick off with a listen to her last studio album’s title song “If The Rains Come First”. Somi attributes the inspiration of this song to one of her mother’s rather poignant sayings, “rain is unpredictable, and could be a challenge or a blessing depending on the onset of its timing“. The song portrays a smooth jazziness in Somi’s vocals with a soulful musical backdrop led by African drum arrangements (significant in most of her songs) and smooth guitar chords. She also delivers some spoken word in her East African dialects in between the milieu that adds to the enchantment of the song. It’s a melodic meditation of the expression of the heart, a reflection of where to be, even if the rain comes first – Home.

“Prayer to the Saint of the Brokenhearted” is another really great song on the If The Rains Come First album. It’s a little more upbeat than the other songs from Somi but if Somi’s slow songs seem to suit you better, then you can check out the live version on her Live at Jazz Standard album.This song (the original) is laden with quick African percussion drums, lush rhythmic melodies and Jazz-tinged guitar licks to make for a very danceable and moving track. Somi sings delicately yet evocatively and also breaks into her ethnic language as the electric guitars have their day with fills right after while the Afro-Samba drum beats keep the song alive.

This next song – “Enganjyani” featuring Hugh Masekela – is one of my favorites on this album. Composed by Somi herself, David Gilmore and Michele Locatelli, the song seemingly tells the story of a discovery of a lover’s mistress who is “Enganjyani“? This song reminds me of a rusty scene – a song in the mind of a woman standing over a balcony of a dusty old fashioned building with the wind blowing in her hair (for some reason). Ushered in by Masekela’s signature trumpet sounds, Somi comes in soft and whispery after the background vocal calls of “Enganjyani” and the song continues on with the trumpet backing Somi’s delicate vocals skillfully at the right places – effortless singing and a beautiful arrangement overall.

Lastly is a single from Somi’s recently released 10-track live album, Live at Jazz Standard which by the way, also included live renditions of the three previous songs we’ve already featured on here. This song is rightfully titled “Wallflower Blues” and it’s a very Jazzy and botanical number (botanical in the sense that it is bright and rightfully so, flowery). Picture a botanical garden and every plant in the garden is musical melody from Somi’s vocal chords. She sings in poetic terms and the harmonies are 100% on point. There’s a well done piano interlude and an understated big band support. Pure Jazz.

Somi is a very intriguing and compelling artist to say the very least and this East African chanteuse is even more commanding live – one of the reasons why you’d want to lay your hands on her latest album Live at Jazz Standard. Not only does she offer you brilliant live renditions of what might be your favorite Somi songs, the album also includes covers of legendary musicians like Bob Marley and Abbey Lincoln with “Waiting In Vain” and “Should’ve Been”. The album also captures the talents of her supporting band in various ways, good music all the way. Add these albums to your collection so you can be on the front row of a Somi show and feel the passion and grace from every sound of her music.
Purchase: Somi – Live at Jazz Standard (Amazon)
Purchase: Somi – If The Rains Come First (Amazon)
Keep tabs on Somi: Facebook // Twitter // Website
Tosinger