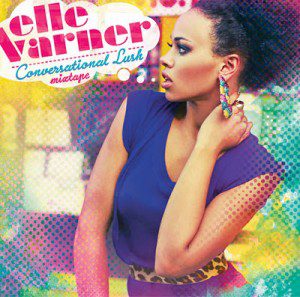 Los Angeles native Elle Shellise Varner was born – February 12, 1989 – into a musical household with both her parents being notable songwriters and publishers. It then comes as no surprise that at the tender age of six, Elle began her musical journey – playing various musical instruments from the flute to the piano and then the guitar. In 2008, she graduate from New York University’s renowned Clive Davis Department of Recorded Music and by October 2009, Elle had signed with RCA Records alongside securing a publishing agreement with Sony Music. All perks of a musical household or is there something about Elle Varner?

I was first introduced to Elle Varner on a track titled “Only Wanna Give It To You” featuring rapper J. Cole which you can listen to HERE. The track is the first single off her forthcoming debut album Perfectly Imperfect, but for now, Ms Varner kindly graces us with a 13-track mixtape titled Conversational Lush which was released on January 23. At a time where good R&B songs are hard to come by, this mixtape is greatly appreciated. Showcasing her songwriting abilities and dexterity, Varner pens all of the tracks on the Conversational Lush mixtape with production from a host of fine music makers such as Bei Maejor,J.U.S.T.I.C.E. League and Pop & Oak. With very good online, radio and TV buzz, Elle Varner is fast becoming a household name in the US R&B landscape.
Starting off the feature is the Bei Maejor-produced track “Feel Like a Woman“. Ms Varner lyrically proclaims her love to another stating just how good he makes her feel with words such as “what a difference between a boy and a man, can’t believe I’ve been missing this all along”. The song takes on a smooth beat pattern with the presence of Reggae horns and steel drums giving it a hint of an Island vibe.Bei Maejor, on double duty drops a few bars to compliment the rightly emotional vocal delivery from Ms Varner to seal off the track.

Keeping up with the love themed tracks on the mixtape, this next track “Ghosts” tells the story of Elle not waiting to fall in love as she’s had quite a few bad experiences. The track has a mix of lush piano chords, shakers and head bopping drum kicks for its instrumentals. Not forgetting a trumpet solo that starts off the chorus, which all together form a catchy unconventional sound. Her witty delivery on this track is more of a narrative, which goes well with the instrumental arrangements and asides the slight vocal similarity to Chrisette Michele on this song, “Ghosts” is all kinds of goodness. I most especially like the sincerity and honesty in the words sung by Ms Varner.

The last track I plug to you off the mixtape is a song titled “32 Flavors” which is a personal favorite of mine. The song is an inspirational rendition to remind listeners that everyone is different and that we can always overcome whatever adversities are thrown at us. Again, Ms Varner speaks from her heart on this heavy milieu, which has a triumphant vibe to it. The tempo switches between an uplifting victorious sound led by marching drums to a more subtle one backed solely by piano chords. This is definitely the perfect closing track to the mixtape as Elle serves this one up just right.

Ok so I lied, I’ll add one more as a bonus track just for you. “EV” – which are Elle’s initials – is the perfect name for this fun uptempo track which samples Jay-Z’s 2001 hit Izzo (H.O.V.A.). On this, Elle steps away from the love themed songs and ballads and introduces us to who she is – from young to old. This is a short playful track showcasing Elle’s quirkiness and vocal range as for the first 30 seconds, she starts off the song as an acappella. Definitely worth checking out…

Listening to this Conversational Lush mixtape, we couldn’t help but notice some tracks where vocal similarities could be drawn to artists such as Jazzmine Sullivan and maybe even Estelle. Regardless of this and any comparisons, Elle Varner is a complete artist in her own right and a definite threat to the game when you take into consideration, her beautiful, soulful vocals and her strong songwriting skills. Other notable tracks on the mixtape worth checking out are “Go“, “So Fly” and “Runaway” which make the mixtape the perfect mix to pop in while kicking it with a bunch of friends. If you’re in the mood for a good mix of some good R&B, Soul and Pop music, this is one mixtape you certainly need in your collection.
Keep Tabs on Elle Varner: Website // Facebook // Twitter
Download: Conversational Lush – Elle Varner
TemiY