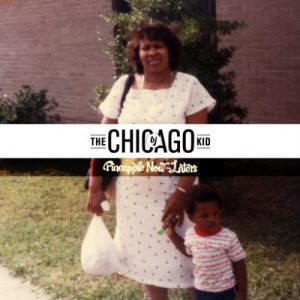 OK so Pineapple Now – Laters is actually a candy! When I first heard the intro to this record, I thought  BJ was just reciting some really cool Spoken Word with some deeper meaning but he’s actually just talking about candy people! Apparently it was his favourite candy as a kid and in previous interviews, he has stated that this pre-album is just a taste of everything BJ – he refers to it as “World Soul R&B”. I refer to it as a perfect mix of all things Soul and GOOD.

Bryan Sledge aka BJ the Chicago Kid grew up in Chicago and like every other great Soul artist out there started from good old Gospel music. His brother, Aaron Sledge is actually nominated for a Stellar Award – it runs in the family apparently. Growing up in South Chicago where nothing was really promised meant that little Bryan had to rise above all the odds and work hard and at the age of 19, he moved to L.A and from there, has become somewhat a household name in new R&B/Hip-Hop. His first break came from singing back up for Mary Mary, Anthony Hamilton and Musiq Soulchild and writing for Mary J Blige. He came up with the name BJ the Chicago Kid because he wanted something that would stick when first heard but funnily enough in a recent interview, BJ stated that he would like to go back to being called Bryan Sledge because it sounds more professional and international.
When I first heard of BJ the Chicago Kid, I honestly thought he was a Hip-Hop artist and admittedly, BJ does concede that “BJ the Chicago Kid” makes him sound like a rapper. Personally, I like BJ the Chicago Kid and after listening to all 18 tracks on Pineapple Now-Laters, I think that name brings a certain funk and intrigue to everything. This “album before the album” is meant to provide a taster of everything BJ has to offer, and boy does it just! Pineapple Now-Laters literally is just like a kitchen sink full of everything that makes a good Soul-filled album. There’s a rawness to every song that I just can’t get enough of. These songs are refreshingly organic and it’s almost like they grow and germinate in your mind after a few listens. Everyone knows that I’m generally opposed to albums that have more than thirteen tracks because I feel an album starts to lose its overall theme and ethos once it gets to track 15 but with this album, it’s very different.
Every song is its own but still flows well with the others. There are some real Hip-Hop beats on this record but then it goes beautifully into Jazz and then Blues. I’ve never tasted Pineapple Now Laters but if this album is anything to go by, then I can confidently say it is currently my favourite type of candy! I don’t think I’ve been as excited about an artist since stumbling on Frank Ocean! You know when you’re listening to a soulful Hip-Hop song and the hook is so good and so soulful that you almost don’t want the rap verses to come on at all? Well yea, this album is sorta like that – compilations of great soulful hooks woven into beautiful tracks. A perfect example of this is “Dream II” where he has snippets of a Will Smith interview on work ethic, which I think mirrors his own work ethic. And then there’s the Jairus Moze-produced ode to all Black women titled “Fly Girl Get’em“, a track that could easily have featured Common or someone similar on it – a very uplifting (without being cheesy) and heavy tune with fresh vibrant sounds filled with lush horn arrangements and drum patterns.

The next track on Pineapple Now-Laters that really strikes me is “Sex X Money X Sneakers” with its Old School Funk feel and very upbeat vibe. This song has to be my new anthem, I love how he decodes the secret to a good life and boils it down to these seven thing – sex, money, sneakers, airplanes, good reefers, good music and good people! It’s just so much fun every time I listen to this track that I can’t help but singing along – the song literally bubbles in your chest!

On songs like “Aiight“, “Good Love”, “The Big Payback” and “Good Luv’n“, he turns up the sexy for us ladies and belts out some smooth love tunes that are perfect for setting the mood. On “Aiight” which is produced by Brody Brown, BJ starts off by hitting those soft falsettos out of the park and you can’t help but be reminded of the likes of Musiq Soulchild and J. Holiday. The slow burning drum patterns, minimal keyboard arrangements and smooth backing vocals accentuate the song’s sensuality. BJ gives this song that familiar feeling and makes it sound like a song you might have heard before but love listening to over again – it’s got that old school R&B/Soul vibe that remains timeless.

The last track I’m gonna be plugging to you on this feature is one that pulled at my heart string the first time I heard it. It is the Sounwave-produced “His Pain II” (Best New Music Week 3) which features Kendrick Lamar and damn this song goes hard without even trying. Kendrick Lamar gives a personal testimony of life’s general woes and close calls and ends each line with “I don’t know why he keep blessing me“. At one stage in the song, his voice literally breaks and you can hear him struggle to speak through the held back tears which really add to the tone of the whole song. BJ’s vocals gives this tracks all the complements it will ever need, track is beautifully raw! Have a listen for yourself.

Pineapple Now-Laters is a very adept, intriguing and captivating 18-track record that perfectly introduces you to the world and beautiful sound of Bryan Sledge akaBJ the Chicago Kid. It’s an album you probably won’t get tired off easily, which for me personally is very welcomed amongst the all so similar sounds of today. And no, I am not saying that it sounds different to what we’ve heard before – no idea is original and all that. What I’m getting at is its consistency and ability to create new age Soul and R&B in a world where R&B is seriously suffering from an identity crisis. Knowing that there are still artists like Bryan who are willing to make good music that represents what they are about is comforting and a hope giver for music in general. Pineapple Now-Laters is a very generous album that provides something for all Soul, R&B and GOOD music lovers and is not one to be slept on.
Purchase: BJ the Chicago Kid – Pineapple Now-Laters (iTunes)
Till the next time…
Sex X Money X Sneakers