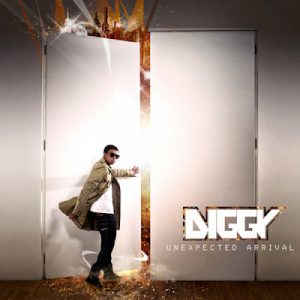 Even after three mixtapes [that I shamelessly still bump occasionally], I instantly think of young Diggy from the reality TV show Run’s House whenever I hear Diggy Simmons. Needless to say, this Unexpected Arrival album, if nothing, has erased that thought as Diggy has very well proven himself to be a true rapper on his debut solo effort.
Born on March 21 1995 as Daniel Dwayne Simmons III to famous rap icon Rev Run or Run DMC, you could say that music has always ran through Diggy’s veins. He released his debut mixtape The First Flight in 2009, which got over 100,000 downloads upon release and resulted in firm interest from as many as five different labels for the young rapper. Airborne and Past Present and Future – both released in 2010 – were his second and third mixtapes respectively and were both met with plaudits from fans and critics alike. His work in 2011 landed him on Billboard’s 2011 Artists To Watch list and also earned him a spot on 2011’s XXL Freshmen list. His début album Unexpected Arrival was released on March 20 via Atlantic Records and here are our thoughts on the 12-track affair.
We start with the track “Hello World” and being the first full song on his debut album, Diggy is definitely off to a great start with it. The chorus is catchy and the music draws you in even on the first listen. It starts off with simple piano chords till a heavy Hip-Hop milieu backed by an electronic guitar and drum kicks is fused in to make a classic beat that’ll have you head bopping involuntarily. Diggy’s flow and lyrics are those of authority letting you know the young artist is here to stay and he’s letting his talent speak for itself. Listen below to get a taste of what the rest of the album holds.
On “Two Up“, we hear Diggy switch his style up taking us to his more commercial side while still creating good quality music. Think of it as that chill rap music you’ve been waiting for all year, so its only right that this fresh track is on replay. Diggy withdraws from addressing the haters and doubters to rather talking about what he hopes to achieve with his music. The instrumentals possess that lush kick back sound with the perfect rhythm, soft drum kicks and piano-patterned sound. Diggy’s vocals complement the track amicably, and the catchy chorus drifts you away so far that you forget you’re listening to a 16 year old. Check out “Two Up” below…
The award for best song on the album goes to my last plug, “Glow In the Dark“. This really should have come first on this review but I figured I’ll lure you all in to the album slowly. The chemistry between Diggy’s flow and the guest vocalist on the chorus over the crisp production screams pure perfection. Diggy raps about his trials through making it in the music industry. Listening closely to this album and this song in particular, you can tell that its Diggy’s talent – and not his father’s influence – that got him to where he is, else big brother Jojo would have also bagged a record deal as well if the latter was the case. Think triumphant, think victory or in the words of Charlie Sheen, #Winning… all exude from this track.
When I think of great albums or my favourites records, they are usually ones where no tracks on the album can be skipped and even if I have to, it’s no more that one or two tracks. On Unexpected Arrival, “Four Letter Word” was one of those for me not because it’s a bad song but because it’s just a bit too cheesy for my ears. His younger crowd however might take a strong liking to it as he gets his Drake on with the singing on the track. Diggy sticks to catering to his female fans on the Jeremih-featured track “Do It Like You” while he switches to a more mature and hard-hitting rap stance on tracks such as “Need To Know”, “88” which features Jadakissand “Tom Edison”, doing so very well.
Diggy featuring Tank is one formula I would never have conceptually thought of, but the duo on the song titled “Special Occasion” bring that fresh grown folk music to the album that you might not have expected. Leaving the other tracks to your unveiling, the album Unexpected Arrival finds a way to cater to a range of audiences while still keeping the music in sync. Atlantic Records sure did make a wise decision to sign the young emcee and at only 16, there’s no doubt in our minds that Diggy’s name will continue to be thrown in the hat as the possible and ever more likely face of the new era of Hip-Hop.
Keep Tabs on Diggy Simmons: Twitter // Facebook // Website
Download: Diggy – Unexpected Arrival (iTunes)
TemiY