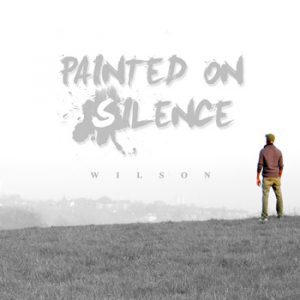 Introducing emerging Brit Soul Singer/Songwriter Wilson with his debut EP,Painted On Silence. Hailing from North London, Wilson has been singing his entire life with performances starting from as early as primary school and according to his Facebook page, his influences range from the late great Michael Jacksonand Whitney Houston to Stevie Wonder and Donnie Hathaway among others. Wilson, who is a University graduate of Commercial Music, has performed at some of London’s famous venues such as the Jazz Cafe, Hackney Empire and the Royal Albert Hall over the years but Painted On Silence marks his first public foray into the world of recorded music. Read on to find out what we thought…

The title of Wilson’s EP is really clever and it is killing me that I can’t find more about how he came up with this title. Oh well, listening to this beautiful EP and inferring from the music will just have to do for now. Painted On Silence is only six songs long, two of which are the EP’s intro and outro – each lasting rather excellently for about two minutes and both providing a perfect start and end to the record. If this of a taste of all things Wilson then I am already eagerly waiting on more music from the London Singer/Songwriter.

His sound is a delightful mix of Soul and Jazz music with a very prominent Gospel element and his pure and unadulterated vocal abilities are just undeniable. His vocals faintly remind me of Lemar – they both have this drawn out and lush texture to their voice that I absolutely adore – and I want to say that this album was performed and recorded with a live band because the quality of it is so good and so pure. This Painted On Silence EP as a whole is very inspirational and really uplifting. I received it while I was at work and I had it on repeat for hours, it certainly made my day go a lot easier and faster!
The first track I will be plugging to you from Wilson’s Painted On Silence is the EP’s second song titled “I Won’t Complain” and what I love the most about this track are the marching band drum patterns that shine all through this well-crafted song which is also well-backed by lush keyboard arrangements and complimentary harmonies. The lyrics of the song speak brilliantly about running a race for love and how it isn’t about coming in first because being with that special person makes up for everything. In love there are no short cuts, you’ve got to take the long way to get it right (and not first) and “I Won’t Complain” expresses this rather beautifully. Have a listen for yourself below…

The next song after “I Won’t Complain” in the EP’s arrangement is titled “In Your Eyes”. It is a heartfelt acoustic ballad over which Wilson pours out all these beautiful things about this special lady – her eyes and her smile – and how she transports him to another universe where they are meant to be together – really romantic stuff from the burgeoning singer and songwriter. This is just that kinda song you need to listen to on a rainy day while you stare out the window and you can be guaranteed that you will also be transported to another place just from listening to Wilson’s dreamy vocals over this beautifully simplistic acoustic arrangement. It’s always a beautiful thing when a man is able to openly tell you how he feels, and I don’t care what anyone says, he’s clearly singing about me! You all can hate but by all means listen below…


“Stay With Me” is the fourth song on Painted On Silence and it is the upbeat Soul/Funk song of the album. It has this really fresh throwback 70s/80s feel to it with the echoing complicated melodies and live Jazz feel. I reckon that this song will be absolutely amazing to witness being performed live because there are so many things going on here sonically – from the lush drum patterns to the excellent guitar strings to the draping keyboards – but they all blend together nicely to make “Stay With Me” a very delightful audio haven! Listen below:

I wanna say that I wish this EP had more songs on it but I somehow think that any more than six songs would alter the flow and balance of the songs selected to grace the record. You can tell that each track was very well thought out and I love how each song sort of flows into the next track without ever sounding the same. By the way, another GOOD song from Wilson which unfortunately isn’t on the EP is “Now or Never” which you can find on his Soundcloud page, however I digress.
Normally on EPs, you find artist just throwing in a bit of everything here and there without telling any real sort of story but with Painted On Silence, you will find that there is a theme sonically right from the intro all the way to the outro and it tells a story. Wilson tells a beautiful story on this EP and you come away from it feeling like you now know this fella called Wilson. If he is able to create such a masterpiece with just six songs then it will be intriguing to see what he does with a whole album. This London newcomer is definitely not an artist to be slept on! ThePainted On Silence is out NOW for FREE download so go get yours.
Download: Wilson – Painted On Silence EP
Keep Tabs on Wilson: Facebook // Soundcloud // Twitter
Jade O