Home » Reviews » Album Reviews » We Plug To You… Karmin – Hello 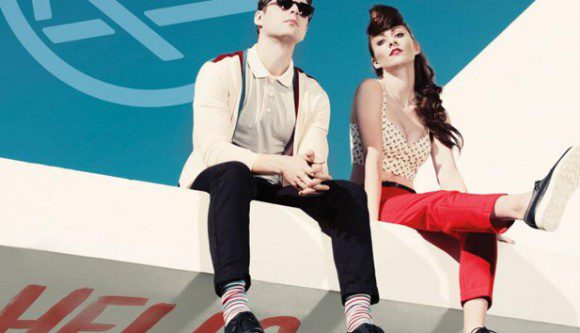 Hey folks, it’s been a while, but I’m excited to share my first Pop related plug. I first heard of the group Karmin when a YouTube video of their cover of Chris Brown’s “Look at Me Now” went viral. It has over 66 million views, but just in case you haven’t seen it – click here. I was surprised to find out Karmin – bursting with talent at that time – wasn’t signed to any major label. Not too long in the future however, Epic Records a label under Sony Music Entertainment recognized their talent and with that said…

We plug to you Karmin – the pop duo made up of Amy Heidemann and Nick Noonan. The group known popularly for their YouTube covers, have quickly risen to fame going as far as having their original song Take It Away used in the 2011 NBA Finals. Amy and Nick have been into music for a while meeting while they both attended The Berklee College of Music in Boston, USA. After performing on Ellen and being featured on Ryan Seacrest’s blog, the hype to sign with a major label was inevitable and the rest they say is history. The real life couple released their first album Inside Out in 2010 followed by The Winslow Sessions in February 2011. In June 2011, the duo signed with Epic Records and released their first major label album Hello (executive producer L.A. Reid) in May 2012. Currently, the duo are taking a hiatus from releasing YouTube covers, but promise they would go back to the recipe that brought them fame.

The first track I plug to you is the lead single and in my opinion most catchy song off the Hello album. “Brokenhearted” is an upbeat fun-loving-mainstream-pop song set to do well on the charts. The radio friendly single has received a lot of air play in the US and peaked at #16 on the Billboard Top 100 chart. In true Karmin sound as we’ve seen from their videos, the song includes a quirky miniature rap alongside Amy’s singing about a girl who’s brokenhearted after being forgotten by a guy. Mostly guitar driven with a patterned mid-tempo drum kick, word is the track is about how both group members Amy & Nick started dating. Produced by Cirkut, Dr. Luke and Benny Blanco, listen to “Brokenhearted” below.

The next track “Too Many Fish” sees Amy make a 180 degree turn from being brokenhearted to (almost) chanting there are way many other guys out there to be caught up on one. I have to mention even though totally different, the track keeps me wavering back to a similar Beyoncé single – think “Single Ladies”. Amy raps more on this track than singing, but she does it absolutely well. Hopefully this will be released as a single off the album as I can predict a whole host of ladies relating to this. The pop-clad-R&B instrumentals filled with claps, trumpets and a catchy drum line are up-tempo enough to have this easily played in the clubs.

Lastly, I plug what is the album’s title track “Hello“. Keeping up with the mostly upbeat trend of the album, the dance track produced by Stargate shines as one of the albums top tracks. Amy re-visits her Busta Rhymes rapping speed on this one as she jokes she can even go faster. On first listen, the verses seem a little all over the place, but the likeable chorus fits it all back into one melodious track. Can we say here’s another radio hit by the duo?

I do have to mention the Hello album with its (meagre) 7 tracks runs only a little over 24 minutes which makes for a rather short listen – probably why it’s being touted as an EP. The duo however is possibly in plans to release a deluxe version of the album containing additional tracks. Other notable songs on the album are “I Told You So” which is the official second single and the ballad “Coming Up Strong” where we hear Nick sing for the first time! From performing for Jay-Z at his RocaWear clothing line campaign to the BET Awards Pre-Show, Hello couldn’t be titled any better as a way to introduce the duo to the industry.