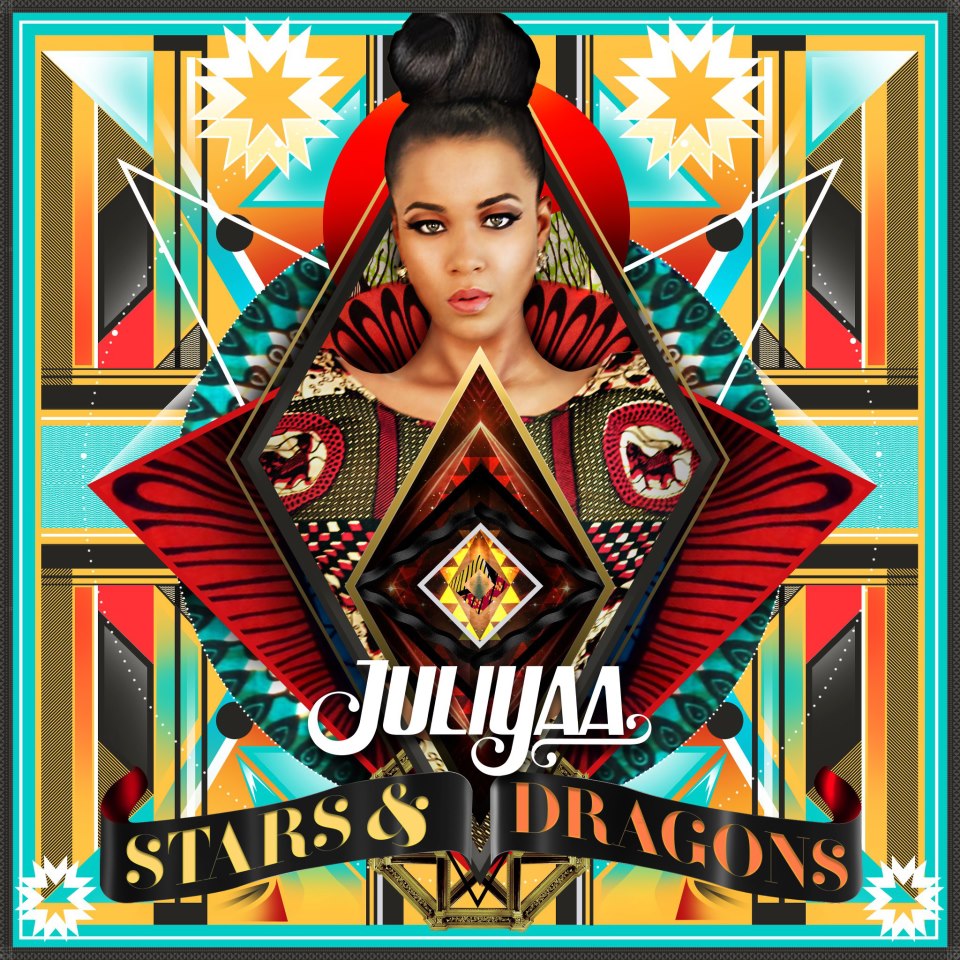 All artists seek to express something of themselves and their experience, within their music and Juliyaa is an artist, whose cultural and social roots are deeply ingrained in her music. A child of Welsh and Ghanaian parents, the North London singer, celebrates her rich cultural heritage on her debut EP, Stars and dragons.

The EP title is a reference to the national symbols featured on the flags of her parents’ native countries: ‘Stars’ alludes to the Black Star of Ghana and ‘Dragons’ refers to the Red Dragon of Wales. Juliyaa describes her music as ‘rhythmic soul’ and the opening track, “Thursday Born”, provides the framework for the EP as whole. On this track, Juliyaa eulogises her story of growing up in a multicultural family in London. She lists the varying musical experiences that have influenced her life, such as singing in a Church choir and listening to Garage music. Juliyaa turns her everyday story into a mythical sounding tale of musical and cultural discovery. The five tracks that follow this are an eclectic fusion of cross-beats and polyrhythm played out on songs that incorporate elements of R&B, Garage, Drum & Bass, Dub-step and Highlife music.

“Tidal Wave” is a great example of this. The track uses water as a metaphor to describe the over whelming effects of love. The song combines elements of Pop, R&B and Electronica while the echoic vocals and repetitive bass-line imbue the song with a mood of brooding intensity. Undertones of Drum & Bass and Dubstep woven into the song become increasingly intensified. The arrangement on “Tidal Wave” imitates the movement of waves: the layering of different musical strands on the core bass line actually produces an exciting tidal wave of sound.

The B.Hanson-produced “IWIHIA (I Wish I Had It All)” is a gorgeous piano led ballad, executed with class and simplicity. It’s about finding the balance between striving for more in life while still being appreciative and content with what is current and real in the present. Juliyaa’s emotive voice rings out with spine tingling clarity over this poignant song. This track stands out as a moment of calm and stillness on the EP. The paired down arrangement is contrasted against the other predominantly up tempo, elaborately layered songs on Stars & Dragons.

The title track “Stars & Dragons” is inspired by West African Highlife music. It’s an uplifting song that revisits the themes of heritage and identity seen on the E.P’s first track, “Thursday Born”. It’s inspired by Juliyaa’s trip to Ghana and how this experience enriched her sense of identity. It centres on the concept of home as a state of mind rather than a physical place.  It’s a striking touch to have traditional African music featured here and in some small way it goes toward contextualising the Afrobeats music that’s currently gaining commercial popularity. The intricacies of sounds on this song create a feast for the ears. The rich opening harmony and the percussion- heavy, cross-rhythm creates beautiful colour and texture. “Stars & Dragons” is a celebratory song, which defies you to stand still – the plethora of rhythms quickly encourages you to pick a beat to shake a leg to!

Essentially, Stars & Dragons is not only a tribute to Juliyaa’s cultural heritage but also to the diverse music that has helped to shape her life. Everything about this E.P is to do with fusion and unity. Even the name Juliyaa is representative of the union between European and African traditions. There is particular emphasis on the enhanced unity to be enjoyed from embracing various kinds of fusion – whether it’s racial, cultural, social or musical. Even the E.P’s art work fuses different patterns, shapes and colours giving a striking visual representation of the brilliant kaleidoscope of music featured on this E.P. Stars & Dragons is a great debut! It’s an excellent introduction to Juliyaa. Her unique, yet accessible sound is truly intriguing.

Stars & Dragons is available on Bandcamp