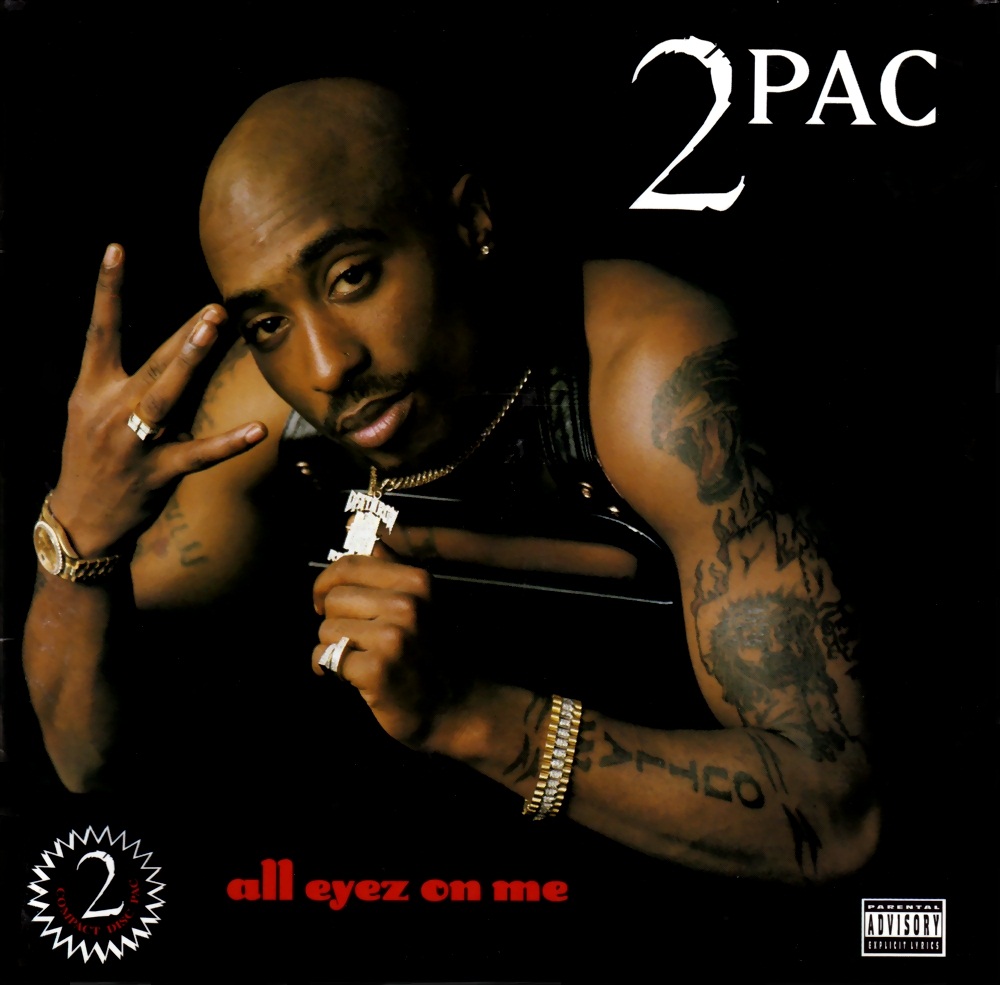 This week, the periodical top 10 rapper debate erupted on my twitter timeline. This only ever results in stress and twitter rage with pockets of individuals nominating candidates that others believe are ill equipped to be matched up with the best that ever did it. What is Hip-Hop if not for opinion? Following this, I was asked to critique a Hip-Hop album that was one of my early inspirations to make music. 2pac has always been a subject of rebellious debate from rap lovers. On the whole, he seems to be mainstay in the top 5 of most Hip-Hop connoisseurs with a few providing resistance to his musical merits, claiming he hasn’t made one classic album despite having an admirable work rate. Well let’s try and put this to bed shall we?

All Eyez On Me was released in 1996 prior to precisely seven months before his untimely death (cue the “Tupac is still alive, peep Machiavelli” conspirators). The album asserts itself as a staple West Coast export with heavy sampled but groove infused drums with smooth bass grooves and archetypal synth leads. It explores Tupac’s life at a time where he had come out of prison and his raps seemed to move away from the heavy political commentary on his first three studio albums. He seemed to have accepted the perception of him, fuelled by a mainstream media vendetta against him. He spoke of his environment and relatively glorified the ‘Thug Life’ much more in this record than he ever had. This seemed to resonate with the audience, giving people more of a insight into what he was like day to day and how this intertwined with his previously proclaimed political and social views.

Although there are some undisputed fillers on this album (which most albums do have), what makes this album a classic is the whole package. This was Tupac’s best outing with regards to production. The combination of Dr Dre and Johnny J worked a treat with the outcome being some of Tupac’s best music, sonically, developing the West Coast sound into something much more wholesome with increased texture than what had come before it. Disc 1 is mostly unskippable with crowd favourites such as “All About You” and “How Do You Want It”, featuring Nate Dogg and K-ci and Jojo respectively. Disc 1 focused on the conceptless and entertaining rumbles that all classic albums need. “California Love (Remix)” typifies the essence of the first disc effortlessly. Also it was wonderful to see features with Staten Island’s Method Man and his counterpart Redman on the typically East Coast sounding “Got My Mind Made Up”.

Disc 2 alluded much more to what Tupac had become well known for, his social commentary. He encapsulated typical tales of hood misdemeanours within stories that made you feel as though you were a lot closer to that life than your bedroom walls actually allowed you to be. “Shorty Wanna Be A Thug” and “Wonda Why They Call You Bitch” gave real depictions of misguided females in that demographic without losing edge.

My personal favourites on the album are “Picture Me Rolling” and the album’s title track “All Eyez On Me”. After serving his prison sentence and being shot the first time, he had a lot of things to say to a lot of enemies which he did successfully. In the former of the two, he speaks about leaving jail and the feeling of everyone wanting you eradicated whilst having developed into a better man and having a better understanding of the world;

“Don’t want to be another number // I got a fuckin gang of weed to keep from goin under // The federales wanna see me dead – niggaz put prices on my head // Now I got two Rottwillers by me bed, I feed em lead // Now I’m released, how will I live? Will God forgive me for all the dirt a nigga did, to feed kids?”

Whilst conveying this sentiment he tells all his enemies to keep watching him do him since they failed in their attempts to stop him. “All Eyez On Me” is the statement track on the album with him re-asserting that he lives a thug life and has embraced that he will die this way. His raw approach to the raps and the timeless smooth production by Johnny J show that opposites attract in blaze glory.

“The feds is watchin, niggaz plottin to get me // Will I survive, will I die? // Come on let’s picture the possibility // Givin me charges, lawyers makin a grip // I told the judge I was raised wrong, and that’s why I blaze shit // Was hyper as a kid, cold as a teenager.”

The honesty and energy on this album, without a shadow of a doubt, contributed to the fabric of Hip-Hop today and is one of, if not the most complete of 2pac’s works. Hip-Hop has always been a competitive sport but what 2pac exhibited is deeper than just a flow, a message and any other technical rap device. In fact I agree with those that have said his technical abilities were maybe dwarfed by his biggest rival but Mr Shakur’s biggest strength was his passion, the ability to be as raw as they come and still stimulate empathy amongst listeners.

This has manifested in the style of many children of Hip-Hop such as Kendrick Lamar as heard on Good Kid, M.a.a.d City and Lil Wayne on his earlier works. All Eyez On Me captures the ‘me and my people against the world’ essence that has become a disposition for many modern day rappers who feel misunderstood in the spotlight. Most rappers can relate to being a product of ones environment and this album is his testament to this notion whilst being a momento of a time in his life that intrigued everyone worldwide. The perfect soundtrack to a segment of life that needed to be documented.

Purchase: 2Pac – All Eyez On Me (iTunes)