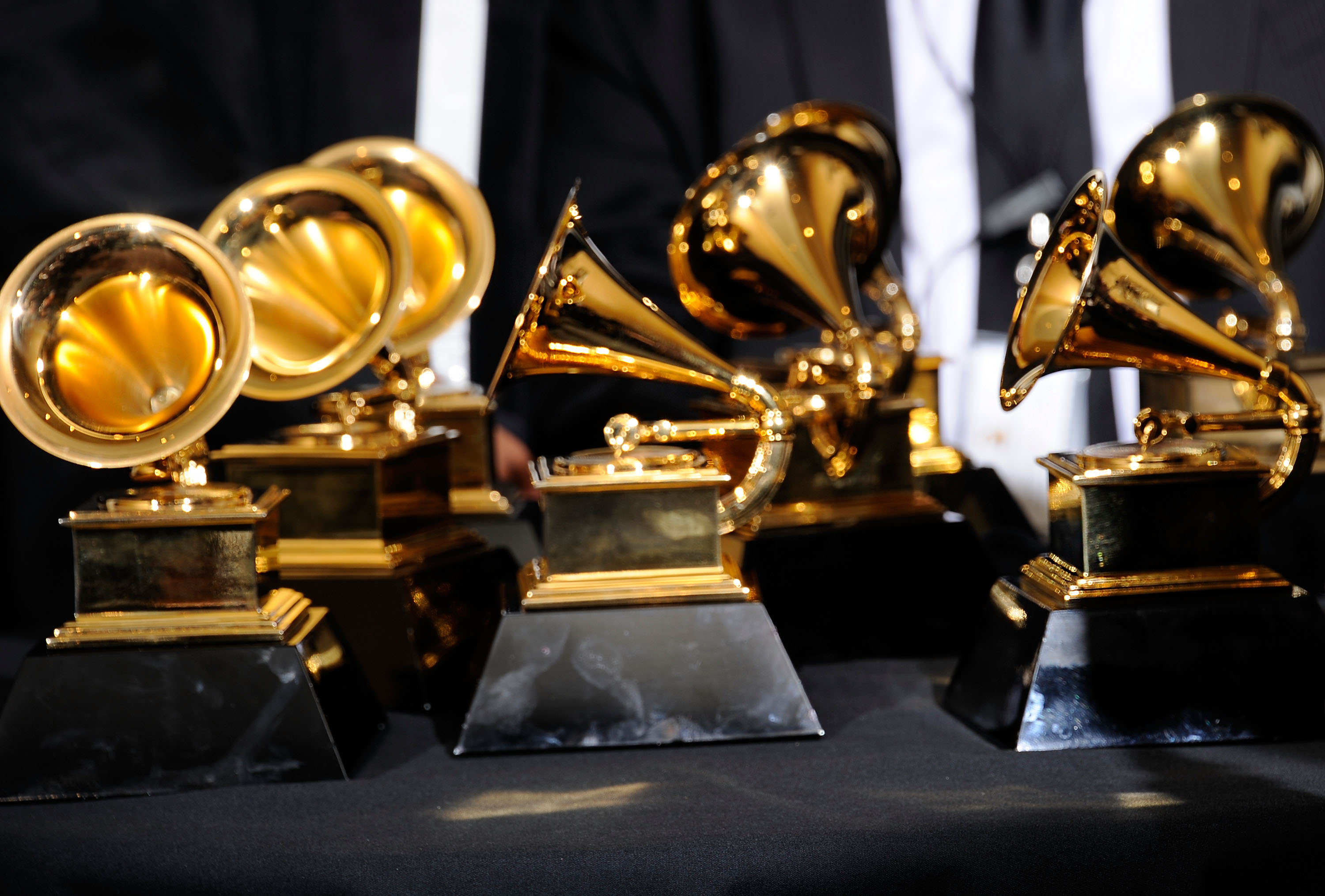 The 56th Grammy Awards ceremony hosted by Rap legend LL Cool J over the weekend (January 26) provided the show with the Hip-Hop presence they were lacking in multi-Grammy award winners Macklemore and Ryan Lewis. The duo took home three awards in the Rap category including Best Rap song, Best Album and Best Rap performance, beating out crowd-favourite Kendrick Lamar. This is ironic considering that Macklemore and Ryan Lewis nearly did not make it into the Hip-Hop categories in the first place. Their music was not considered Hip-Hop by the group of music industry Hip-Hop experts who were assigned to deliberate on the nominees for these categories.

On the night, Jay Z won the Grammy award for ‘Best Rap/Sung Collaboration’ for “Holy Grail” which features Justin Timberlake, from his recent Magna Carta Holy Grail album. However, his award speech was rather interesting – acceptance speeches usually consist of thanks to a combination of either God, mother, family, friends, record label or the fans and Jay Z started off in the same manner, until he said, “Blue look, Daddy got a gold sippy cup for you“. Fans of the rapper, including radio show personality Charlamagne believe Jay Z’s remarks were made to minimize the importance of the Grammy award, having been notably snubbed by the GRAMMYs before.

The Grammy Awards were initially started to make sure that musicians with the best skill in their category were recognized and acknowledged, irrespective of who had the best album or single record sales – their byline goes as such, “The GRAMMYs are the only peer-presented award to honor artistic achievement, technical proficiency and overall excellence in the recording industry, without regard to album sales or chart position”. However like many systems, it is flawed, this is the only reasoning that can be applied for why Kendrick Lamar went home with not a single award on January 26. His album Good kid, M.A.A.D City was critically acclaimed and featured fan-favourite songs like “Backseat Freestyle”, “Swimming Pools (Drank)”, B**** Don’t Kill My Vibe” and “Poetic Justice” among many.

The 26-year old Compton rapper is hardly a new artist but in the past year, has reignited the passion within Hip-Hop. While veterans such as Nas believe Hip-Hop is not artistically or intellectually on the same level as it was ten years ago, Kendrick’s music has captured that very essence and brought it to the fore – the meaning, the passion, the raw delivery, the voice of the young people, the skill, detailed descriptions and rhythmic flow. He brought back the true substance of Hip-Hop to the mainstream, created healthy competition and passion where it was once lost. Does Macklemore encompass even half of these attributes? This is not about preference, these are simply some of the attributes of Hip-Hop music.

Audiences took to twitter to vent their frustration at Kendrick Lamar not receiving a Grammy Award, instead losing out to the mainstream pop culture friendly Macklemore, but why are people so surprised? This is not the first time an injustice such as this has taken place at the Grammy Awards, in particular the Hip-Hop categories. Macklemore on the other hand and in a bid to perhaps halt the backlash from his Grammy nod, recently posted a picture to his Instagram of a text message he sent to Kendrick Lamar, he says what many have been thinking.

“You got robbed. I wanted you to win. You should have. It’s weird and sucks that I robbed you. I was gonna say that during the speech. Then the music started playing during my speech and I froze. Anyway, you know what it is. Congrats on this year and your music. Appreciate you as an artist and as a friend.” – Macklemore

Some people anticipated Kendrick’s Grammy snub while others held onto the blind hope that Kendrick could not be robbed so blatantly on the biggest music stage in front of millions of people, but alas. Twitter users have suggested that black artists in particular in Hip-Hop should boycott the Grammys all together, while others believe alternate award shows on the same scale as the GRAMMYs should be set-up. The most interesting suggestion was for an award show called the ‘Ebony GRAMMYs’ which in hindsight, would bring on a pretty big lawsuit for starters. Unfortunately, the Grammy Award has a long history of going against their original ethos and awarding the most commercially successful records, as opposed to the most critically acclaimed, particularly in the Hip-Hop category.

For years, Jay Z boycotted the Grammy Awards as he felt Hip-Hop artists were not being acknowledged for their music and given full TV coverage from the award ceremony. His attendance and performance alongside his wife Beyonce over the weekend was in full debate among fans, up until he appeared on stage. Jay Z’s breakthrough single “Hard Knock Life” lost out to Will Smith’s “Getting Jiggy with It” for ‘Best Rap Solo Performance’ in 1999. Even more shocking was the fact that in the previous year, the GRAMMYs saw fit to award this same category to Will Smith’s “Men In Black” over Notorious B.I.G’s “Hypnotize” and Missy Elliot’s “The Rain (Supa Dupa Fly)”.

Kanye West’s biopic album My Dark Twisted Fantasy was released in 2011 and received worldwide critical acclaim, the album took creativity to new heights, but the album was not nominated for ‘Album of the Year’ despite its widespread impact on Hip-Hop and mainstream music. Kanye West was not even in attendance for this year’s Grammy Awards ceremony. In 2003, 50 Cent lost the award for ‘Best New Artist’ to rock band Evanescence, to the chagrin of Hip-Hop audiences the world over and of course 50 Cent himself, who got on stage and tried to interrupt the band’s acceptance speech – lead singer Amy Lee remained unperturbed as she continued her acceptance speech, even referenced 50 Cent.

In 1998, Wu-Tang Clan legend Ol’ Dirty Bastard, felt his group was robbed at the GRAMMYs that year. The iconic Rap group lost to Diddy – known as Puff Daddy then – for ‘Best Rap Album’ – an award that in truth should have been awarded to Notorious B.I.G’s Life After Death – and during the award presentation for ‘Song of the Year’ to musician Shawn Colvin, Ol’ Dirty Bastard to take to the stage to express his disappointment at Wu-Tang Forever not winning ‘Best Rap Album’, he said:

“I went and bought an outfit today that cost a lot of money, because I figured that Wu-Tang was gonna win. I don’t know how you all see it, but Wu-Tang is for the children. Puffy is good but Wu-Tang is the best. I want you all to know that this is ODB and I love you all, peace.“

Perhaps the most shocking Grammy snub so far, came in 1990 when the ‘Best Rap Performance’ win went to Young MC for “Bust a Move” instead of Public Enemy for their resounding single “Fight the Power”. The following year, their critically acclaimed and commercially successful third studio album Fear of a Black Planet lost to Quincy Jones of all people in the ‘Best Rap Performance by a Duo/Group category. Sadly, Public Enemy have never won a Grammy Award despite being nominated six times. Hip Hop legends such as Nas, Biggie, Tupac and Snoop Dogg have also never won a Grammy award, despite their contributions to the genre and mainstream Pop culture.

While Snoop Dogg shares the title for most Grammy nominations without a win, Nas is notably the most undervalued rapper there is, in terms of acknowledgments from the GRAMMYs. Without him, some of your favourite artists wouldn’t even exist, his debut album Illmatic is one of the best Hip-Hop albums of all time. Unfortunately the album was released in 1994, two years before the Grammy Awards created a ‘Best Rap Album’ category and despite its critical acclaim, Nas was criminally omitted in the ‘Best New Artist’ category in 1995. However, I do believe this album deserved to be rewarded in another way by the GRAMMYs, maybe a ‘Most Influential Album’ accolade, maybe a ‘Lifetime Achievement’ award is in order in his future.

Every few years, Nas releases beautifully crafted music and misses out on a nod from the GRAMMYs, who chose to award some mediocre records instead. His double platinum selling sophomore album It was written was not even considered for ‘Best Rap Album’ at the 39th Grammy Awards in 1997. Nas’ albums I Am…, Hip Hop is Dead, Untitled and Life is Good have all received Grammy nominations for ‘Best Rap Album’, yet he still has never won in that category. In 1997, “If I Ruled the World” lost to LL Cool J’s “Hey Lover” in the ‘Best Rap Solo Performance’ category and list goes on. However, Nas doesn’t complain and simply continues to make great music. Perhaps, it is because he is the most entitled to moan and rant about Grammy snubs, that he just doesn’t.

I consider myself to be a fan of Hip-Hop music (and this is not to jump on the band wagon), but for me to truly get across to you how I feel, I have written a short letter to Hip-Hop and its artists, on my thoughts about Hip-Hop and the genre not receiving the acknowledgment it deserves.

‘I believe that you are no where near your potential. Instead of building upon the work of previous generations, you stay in the past. Not in terms of your creativity but in terms of how you view yourself. For the past 20 years, you have dominated the people’s thoughts through the radio, the cassette player, the CD player and the IPOD. Why continue to attend celebrations which only celebrate your ideas when imitated, watered down and sometimes mocked. Why pour out your heart on stage to get their shows high ratings?

Yet all you receive are the mandatory claps, which say, “stay in your lane. Yes have a tantrum, then forget, dance for us puppet, so that we may be entertained“. It’s sad to watch, there was a time when fists pumped in the air in salute of a new defining moment. They will never acknowledge your greatness because they fear you. The voice of the people is a scary thing as the people have power. Yet their job is to convince you that you have none.

My advice would be to create and control your own media. Legendary MCs, Hip-Hop writers, DJs, producers come together to create your own independent award ceremonies. Call on experts to deliberate and reveal during every award why the winners were chosen. Broadcast the first few shows on Diddy’s Revolt TV if you have to and by the time it’s an established awards ceremony, other TV channels, radio stations, media outlets owned by you can broadcast and positively promote the show.

Not all publicity is good publicity, some publicity can be used to permanently damage a brand. Transparency and truth used correctly can have a major positive impact. I don’t want to hear, in another 30 years, how you feel they don’t appreciate you. I’m getting sick of fighting your battles. You’re grown so act like it. Stay grounded, motivated and creative. Lots of love’