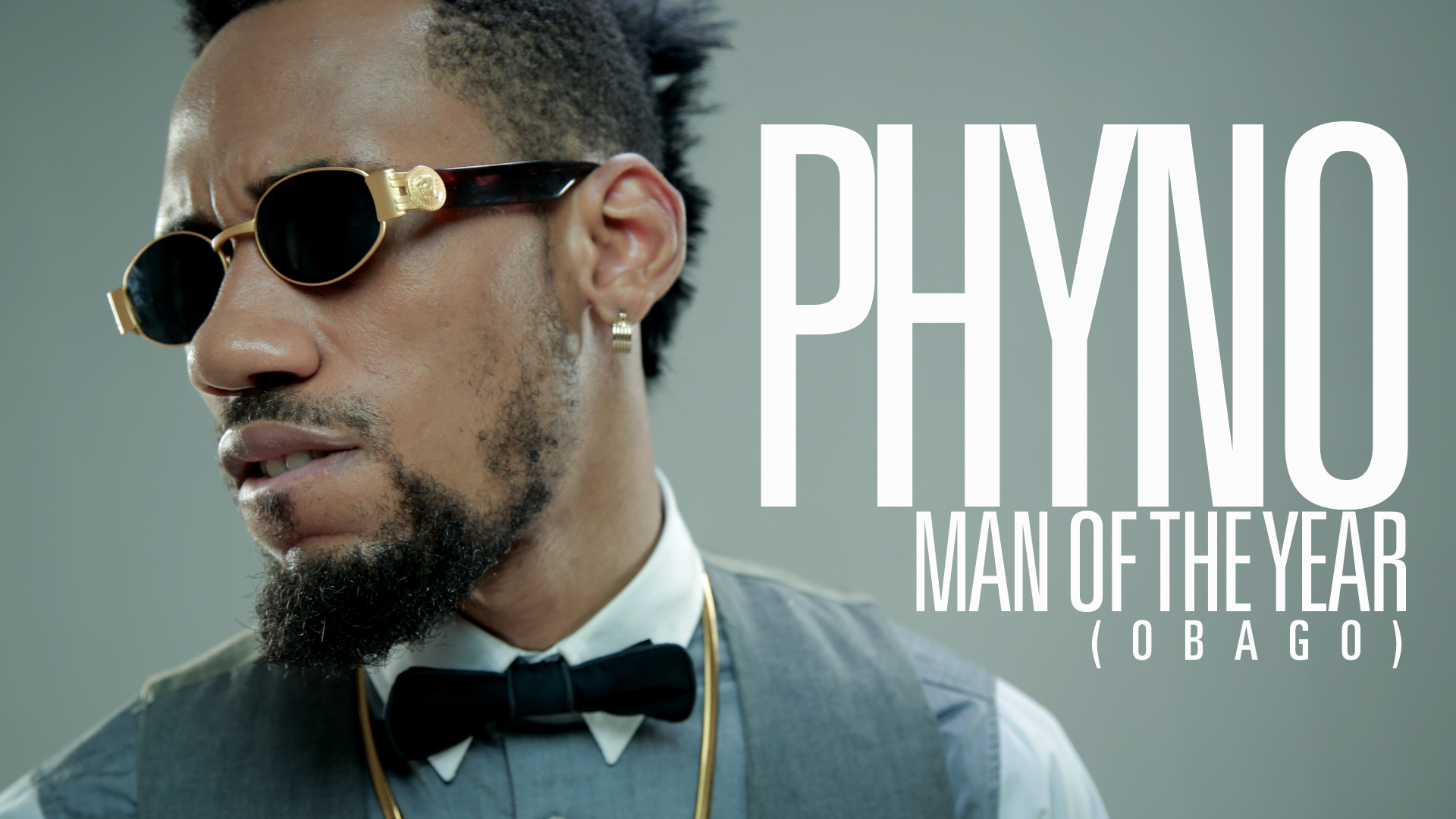 2014 should be Phyno’s year. He is, in a lotta ways, the first ‘cool’ rapper from the South East, in the same way the late Da Grin was to the South West.

Hip-Hop has always been tribal, a constant chest pounding masculine display of who the better rapper, clique and region is. Nigeria, before now, hasn’t been blessed with this essential ingredient of Pap. On the surface, we’ve had songs influenced by ethnic percussion but no full fledged city bragging. There has been no California to Lagos’ New York, it’s looking like Enugu might be the city.

Before Dagrin, the South West had Lord Ajasa, a cat whose cool was never really evident but he offered content that the “road man dem” could identify with, even if he lacked that key street swagger. Ajasa’s respectable catalogue was stacked at a time Nigeria was not quite ready, we appreciated the local flavour but we didn’t take it in. The same can be said for Mr. Raw, the first rapper that embraced his South Eastern culture explicitly, the accepted popular sound was still too erratic to know what to do with Raw at his peak, his non-threatening Igbo influenced Pop Rap songs managed to catch the ear, but never could propel him into proper stardom.

There were other pretenders to the throne, Slow Dog did his thing, as did the dearly departed MC Loph. These guys had semi hits that were bigger than they were. Loph’s biggest hit, “Osondi Owendi“, did more for the, then fast-rising Highlife star Flavour, than for the MC himself. Oh, then there’s 2Shotz. He made your typical broad South Western rap as a solo artist, nothing about his hits suggested to his audience that he was repping Umuhahia but for his inherent “Igboness”. And in all fairness, the aforementioned guys don’t compare to Phyno – but for their common ethnicity, similarities would not be drawn. He is a class apart.

His first foray into the consciousness of the Nigerian music Bloggerati set was on “Ndi Okoko“, a much slept on release by the Enugu vocalist, Stormrex. Next came a business partnership with Ill Bliss, the label owner, cum manager and sometimes rapper dude. This partnership would mean more visibility for the rapper but the question must have plagued him; how would an MC who plies his trade almost exclusively in Igbo fare? Phyno set to work by producing and featuring on “Anam Achi Kwanu“, one of the coldest cuts Naija Hip Hop had been served for a minute. His mien was unabashedly 042, he came to Lagos, but only in the physical sense – how many dudes are out here rocking Mohican extension without raising eyebrows?

If there were still any lingering doubts as to how for real Phyno was, he erased that with his next feature “Ghost Mode“. This joint featuring the lyrically hungry Olamide, happened to the Nigerian industry like a tsunami, heads were clearly hyped to have been blessed with this impolite, take no prisoners big ‘Wa-Bia’ f**k you to the timidity of the Naija industry.

The release of No Guts No Glory (NGNG) should have been an event though, considering that dude is the certified flag bearer of Eastern Hip Hop, he’s the general leading the charge against the ‘Lagosification’ of Nigerian rap. Alas, it wasn’t but in the long run, that won’t matter if the content justifies the hype and expectation around dude, and it’s easy for him in many ways. He already has a hungry fan base, eager to consume his Enugu brand of swag.

No Guts No Glory is the first real Nigerian Hip Hop release of the year, never mind Yung6ix’s quiet release, this album is what all fans of real Naija Hip Hop had been waiting for. An 18+1 track standard release (18+2 songs on the Bonus edition), featuring some of the biggest names in the game and some nice up and coming cats.

He opens with the album with “Chibuzo“, followed by the heavy “Alobam“. This is probably my favourite Naija Hip Hop joint of the year thus far, it’s definitely influenced by Drake’s “Worst Behaviour”, with a slightly haunting sample underneath the mid tempo beat. Phyno does a fine job of bringing this joint to life for a non-Igbo speaker – a lively flow, a reel of easily recognisable names that make it easy to grab the general gist of what homie is rapping about. His boys have the coolest names, PhatBoy, Chorcho, Snow Diggy, Chidi White, I’d like to parley with them.

In between this banger and the next cool joint “Nme Nme“, is the silly “O Set” featuring P Square, dude just had to do this and I’m not sure it works. After that comes “Man of the Year“, this song knocks, no doubt about it. If the following track, “Chukwu Na Enye” featuring Omawumi (Sigh) belongs on this album at all (I’d say not), it’s either a number 10 track or a bonus joint. Putting a gospel joint between “Man of the Year” and “Aju” is not a good decision.

“Aju” is grimey! As in by a Lagos gutter dirty. Understand that I do not understand Igbo but if Phyno’s verse is anything like Olamide’s then, WHOA. These two have great chemistry and this is a much better song than “Dope Money” off Olamide’s Baddest Guy Ever Liveth album. Oh, there’s another MC on the track, EFA, he held his own and I’ll be checking for dude’s future work. Good, good song.

“Parcel” opens with the amusing Chigurl, her schtick is unique and she gave Phyno a good feature. This joint is dude’s anthem, I wait until I can say “I buss up the place” when the hook comes on, I dunno what else he is saying but I like it. This is the kinda joint you hear in the club and you look across the room to reassure yourself that you indeed are “Big Nwa”. This joint makes me wanna wear sunglasses in the club, it makes me wanna pay too much for a bottle of champagne just because I can.

“Kush Music” is when I knew I was a fan and that Phyno was for real. I do not know whose idea it was but that choral harmonising behind the double time flow where dude finishes the lines with words that end with ‘illy’ was one of the hottest things I heard all last year. They banned smoking in the clubs, thus curbing my desire to act out the hook. This joint is definitely one for his 042 man dem, but I’m here for it, all day. “Authe” featuring Flavour is a cool song, though when you get a first rate star like Flavour on a song, you should probably use him better, Phyno turned up, nice flow but Flavour phoned this one in I’m afraid. Still, I expect this song to make the rounds, if not in Lagos then certainly everywhere else.

The first time I heard “Anamachi” featuring Runtown, I was in a cab on some Abuja expressway, and I googled Runtown when I was done listening to it. Dude did this track complete justice, the way he rode the beat, the lyrics – this is a big boy anthem and Run killed it. Phyno chose the wrong flow for this track, it was going well until the beat dropped on his verse, his urgent, too fast delivery crowds the easy cool of the beat and hook. I really like this song though.

Major Bangz samples Marvin Gaye on this beat for “Good Die Young“, and for the first time during my listening session, I wished I could understand Phyno’s Enugu twang so I could feel what he’s saying in its entirety. I like the beat and he chose the right flow and vibe to deliver his lyrics, I can’t be mad at that. However when I first heard “Ojigi“, it sounded like pure noise, but I left the album playing for the better part of the day and it ended up sounding okay. I like the dude’s cadence on this, it’s similar to Jesse Jagz’s on “Kpako” off the Fire Of Zamani album. That can’t mask the fact that this joint is featherweight though.

Producer Chopstix, as well as Phyno, is one of the best things to happen to Naija Hip Hop in a long time – goodness, the joint “Icholiya” bangs. I don’t know what Phyno is saying but it doesn’t matter, he sounds sufficiently ‘Bishop Magic Juan’ enough for me to believe it. Ice Prince delivers one of his best verses in a minute but dude forgot to stick to the brief! M.I though. Good Lord, M.I unloaded all over this track like he’d been deprived of a chance to rap to a sexy female for a long time, dude’s verse just reminds me of just how far ahead he is of most cats in the game. This verse was probably my best on the album (from a non Igbo speaker’s perspective).

“Shey You Know” is a filler but a bad one with holes all in it – a filler that needs a filler (NEXT), and “Ghost Mode” should not have made the album proper, not Phyno’s nor Olamide’s. It’s been around too long, it’s been played to death and the heaviness of it has been dulled, putting in the midst of the all this fresh work is odd. I really like “Holiday” featuring Runtown though. It’s your typical radio friendly song jam, I expect this song will make the rounds in the South East. I like the ‘huh’ question Phyno places at the end of his bars.

“Multiply“, featuring a motley crew of Nigerian artists, is another album filler. The chorus is hot, the song could have been better if all the artists and their sub par verses didn’t park on it. It ended up sounding like a mixtape song. I will skip this track every time. Phyno starts “Paper Chaser” rapping in English but I think dude is better off rapping in Igbo with a smattering of English, his flow was cold though. The hook is really nice, this song should have made the album properly or perhaps dude played it back and realised that his verses were not his best. Ill Bliss did what you’d expect of him, if you’re familiar with his work. Slightly off beat, but hey, he’s Illy, it is what it is. I really like the hook on this and the general vibe – this song is the Nigerian version of DJ Khaled’s “On One”.

This album will be a hit, no doubt. Seeing this come to fruition is a relief and a joy for a lot of Hip Hop heads who appreciate that authentic Naija sound. The glory is evident every time Phyno reminds us that he had made it, ‘An East coast n*gga, (definitely) banging in the West’. But sans “Alobam”, “Kush Music”, “Parcel”, the banging but stale “Ghost Mode”, “Aju”, “Good Die Young”, the witty intro “Chibuzo”, “Anamachi”, “Nme Nme” and “Icholiya”, the album is not allowed to bear out the gutsiness of Phyno’s style or the event this should have been, it is interrupted too often by sub par filler joints.

However where it’s good, it’s really good. The production is thrilling, Major Bangz, Runtown and Chopstix all gave Phyno stellar beats. Phyno himself did not disappoint, but where the choice to present 11 top notch joints over 18/19 very good, alright and skippable tracks presents itself, the artist should probably take the former.

No Guts No Glory is a good debut but I’ll expect more guts the next time around.

Purchase Phyno’s No Guts No Glory on iTunes

One comment on “WPGM Commentary: Phynomenon – A Critical Review Of Phyno’s ‘No Guts No Glory’”