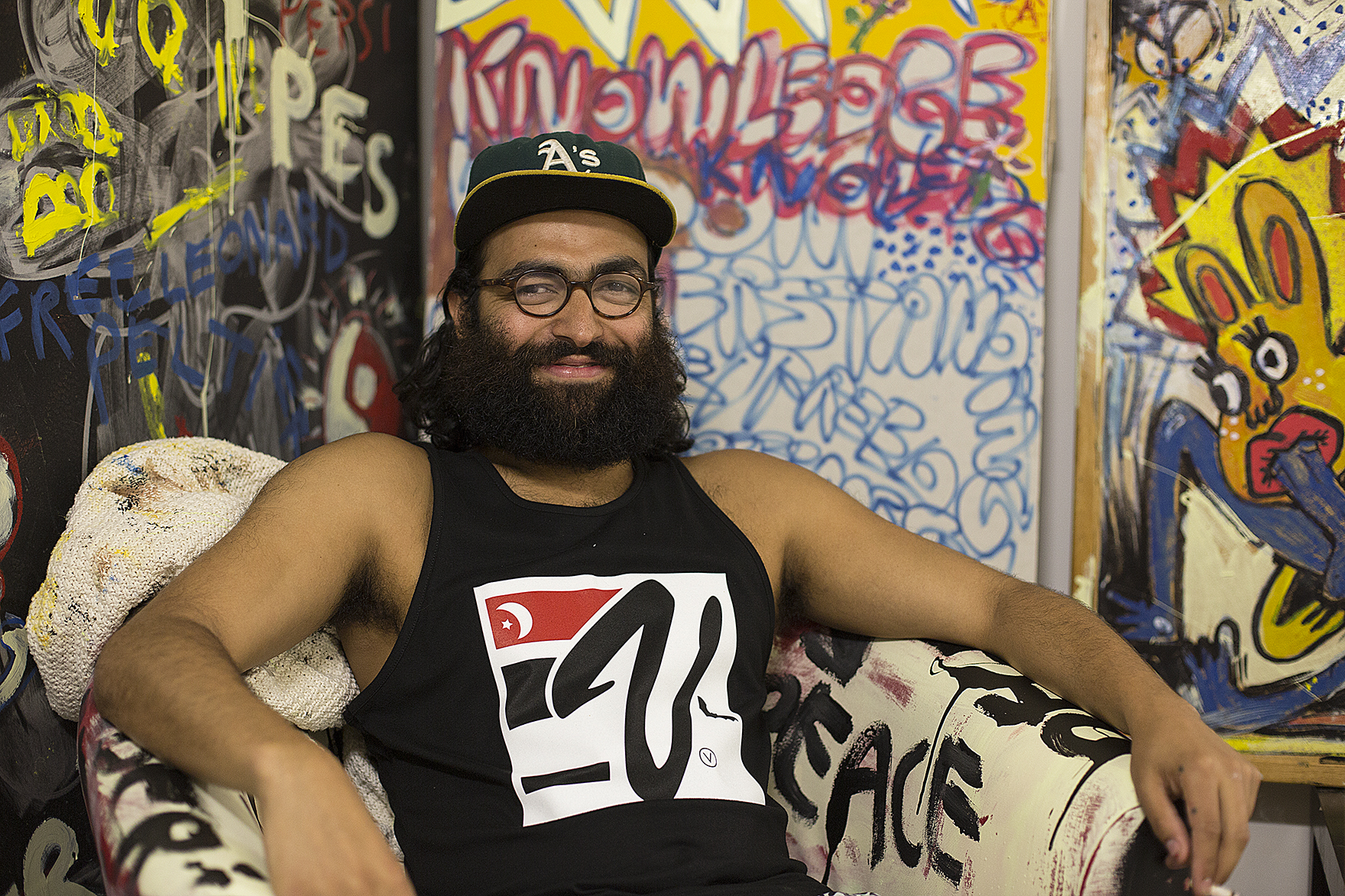 Victor Vazquez, aka Kool AD, is an artist who is truly difficult to try and analyze. In addition to releasing several mixtapes every year that consistently feature a unique and wide variety of production styles and collaborations, he also regularly performs around the Bay Area with his hardcore punk outfit Party Animal, sells bizarre art and “inspirational emails” via his Twitter account, and semi-regularly updates his Youtube channel with psychedelic videos usually cobbled together from grainy footage of old movies and talk shows.

He’s a rapper who seems equally inspired by Lil B ‘The Basedgod’ and dadaism. Since Das Racist’s first and only album, 2011’s Relax, he has remained far more prolific than Heems (the other emcee in the group), releasing a total of six solo mixtapes and two collaborative tapes with fellow Bay Area weirdo rapper Kassa under the moniker Peaceful Solutions. While much of his work is extremely obtuse and not very accessible to the casual Hip-Hop listener, given some patience and repeated listens, it becomes clear that he is, if nothing else, one of the more interesting artists working in the genre today.

Vazquez repeatedly referred to Word O.K, the most recent mixtape, as an “album” and talked about how a certain label that he was signed to was refusing to release it. Not OK, a 15-song tape was released late last year and referred to an album of “outtakes” from Word. It only takes a little bit of research to find out that Kool AD is not signed to any label (at least publicly), and hasn’t been since Das Racist ended. In fact on the second song on Not OK, he used the line “I’m like Drake in that I admit I exaggerate it / But labels be wanting to sign the kid like an affidavit”. It shouldn’t take much to realize that nothing Vazquez says is meant to be taken seriously. Sometimes it is, but even when it is, it really isn’t.

Word OK begins deceptively slowly, with two jazzy, mellow tracks – “Open Letter”, produced by Kool regular collaborator Amaze88 (who Vazquez refers to later on the album as a part of his A&R team), and “I’m On A Plane”, which is the third song he has released in the past two years with a title that references flying. Both of these tracks feature only Kool, in his most stoned-out, mellow tone of voice, and no features. The mood changes abruptly with the third song “Tight”, a Toro Y Moi produced banger that is reminiscent some of the goofier, more upbeat songs off of the Das Racist tapes, with Kool spitting lines like “Couldn’t see me once with bi-focals / Couldn’t see me twice with tri-focals”, clearly trying not to laugh at the end of each line.

A particularly aggressive Lakutis and a sex-crazed Mr. Muthafuckin Exquire stop by for verses before the song ends with Kool crooning in auto-tuned harmonies. Toro Y Moi, who was responsible for one of the best songs on Not OK, produces one other track on this mixtape as well. Several other features from that mixtape also return, most notably Del the Funky Homosapien and Ladybug Mecca, who are inexplicably billed on both tapes as Sir DZL and Santos Vieira, respectively. The track they are featured on this time around, “Life and Time” is one of the highlights of both tapes, as well as one of the best things Amaze88 has ever produced.

The beats here are similar to the majority of the past few mixtapes, but one noticeable difference is the length of his verses. After putting out the 10-minute long track “Dum Diary” on Youtube a couple years ago, pretty much all of his songs have been four minutes or less, even the ones with features on them. Here, there are several tracks which have five minutes or more of Vazquez rapping. The best track on the tape is probably “Special Forces”, which might be a candidate for the most pop culture references ever crammed into one song, including a “shoutout to Lil B, he hella good at rapping”.

As with all Kool A.D tapes, there are a lot of lines on Word O.K that make fun of specific aspects of Hip-Hop culture, lots of repeated lines from other Kool AD songs, and of course, incredible ad-libs. Much like how last year’s 19 and 63 (both named after AC Transit bus lines) had the words “Bieber” and “wow” being yelled in the background of what seemed like every song, Word O.K and Not O.K have Basedgod-esque “woop!” and “yes!” being shouted all over the place, as well as Kool rapidly saying “Oh My God” and/or “Kool AD best rapper” over and over, to start off pretty much every other track.

Rappers boasting about the lyrical abilities and comparing themselves to other rappers is one of the oldest tricks in the book, but Vazquez manages to throw those into punchlines as well: “she suckin’ on my penis, I’m drivin like, extra slow… like a snail / All y’all can get behind my bars… like a jail”. Word O.K, like much of his catalogue, can be kind of awkward to listen to on your headphones in public, because there are either punchlines or strange combinations of words littered throughout which might cause you to burst out laughing.

It’s hard to speculate on where Das Racist would be today if they hadn’t unexpectedly broken up in 2012. They had allegedly signed a contract to release an album through Sony, which would have guaranteed a boost in their rise to fame, but apparently everyone in the group had different goals. Heems was too busy running his own label, Greedhead (which put out Lakutis’ excellen’ 3 Seashells last month), and Kool AD was more focused on being as abstract and confusing as possible, as opposed to being commercially successful.

He has alluded to retiring a decade from now in order to write a book or explore other forms of art, and for all the nonsense he says, that statement actually seems fairly plausible. He doesn’t really seem like someone who wants anything to do with the music industry, rather just float around the outskirts of it and poke fun at it. But if he keeps releasing such eclectic and thrillingly avante-garde mixtapes at the same incredible rate he has been, he might just have to face success after all.