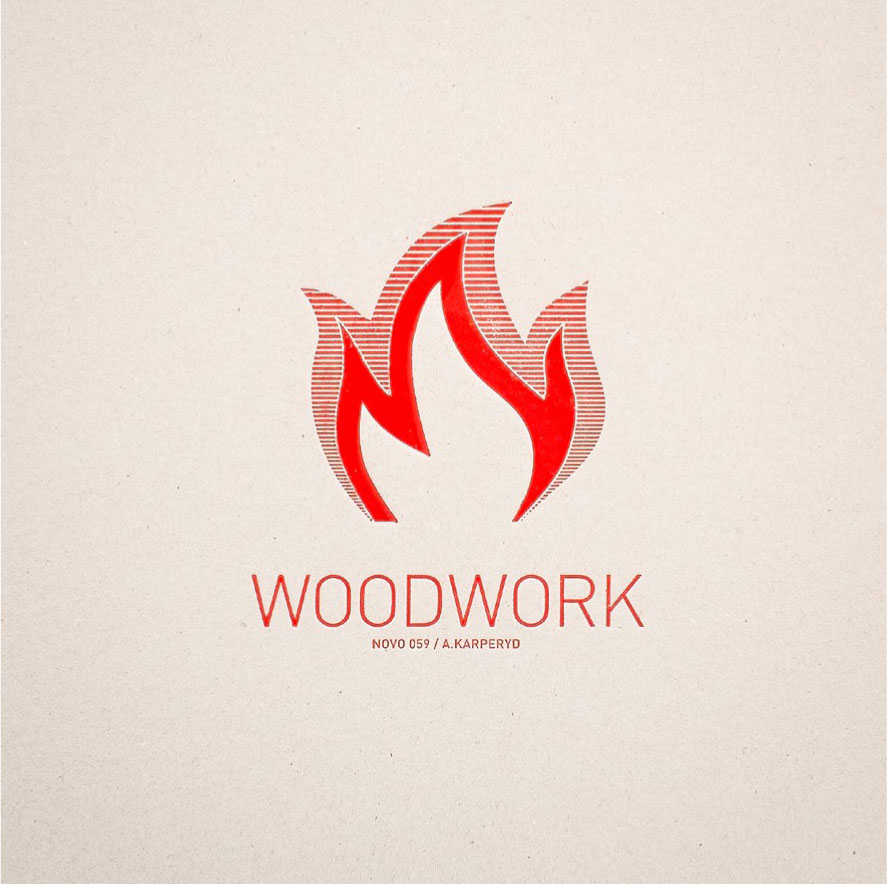 “Recordings like that can work like the sense of smell. Suddenly you recall an emotional state or feeling, like some kind of key to the brain“, describes Stockholm experimental electronic ambiance artist Andreas Karperyd (under the pseudonym A.Karperyd) about his sampling techniques on his first solo album Woodwork. Sampling is an important component of his methodologies but it’s just part one of his overall mission is to create encapsulating yet individual worlds that absorb the listener’s attention away from the surroundings they currently inhabit.

Although this is Karperyd’s first solitary project, his influence on the Swedish music landscape goes back to the eighties as part of groups Omala and He Said Omala. All of his involvements appear to be innovative and ahead of their time and Omala were no different. Omala created environments that were simultaneously intense, suffocating and scary, whilst toying with our subconscious fears. They allowed for audience interpretation which made them even more terrifying.

Examples include “Relicon” which contains pretty glockenspiel accompanied by subtle tribal beats but unsettled by shaky thin waves of sonic effects. When the chords change, the music-box becomes creepy like a childhood nightmare. A spontaneous voice sample from Blade Runner quoting “did you ever take the taste yourself” typically ambiguous of their work. Religion-titled “Heretic” bears resemblance to many horror themes including the knife-cutting of Psycho and a piano variation of The Exorcist and science-fictions Total Recall and Dune.

“Davul” feels dangerous and environmentally unfriendly by building like a suspenseful occult ritual inside a pollution-smoking factory. “Smell Touch Taste” and “Theme From Cockroaches” added gloomy and mysterious David Bowie-esque vocals caged inside an industrial synth dungeon guarded by robots on the former and stuck in a thunderous and ghostly hurricane in the latter.

Karperyd joined up with Graham Lewis of London art punk band The Wire to create He Said Omala (a combination of Omala and Lewis’s solo project He Said). It combined Karperyd’s ambient and intricate atmospheres with Lewis’s obscure and fractured thoughts, in a similar vein of Tricky on Massive Attack’s “Karmacoma”. Yet it moved Karperyd away from the horror-tinged sound of Omala and into creating subtle spaces with even more ambiguity and room to breathe, and had more in common with science-fiction genres.

“Bedeck-a-kneck” shows how they built songs with patience, adding to the ambient trip hop layers with efficiency. “Post Code Orange” feels intellectual wise in words even if it’s confusing but it is complimented by a hypnotic and stuttering glitch that would later become one of Karperyd’s trademarks. “Sea Horse Trading” gives Lewis an androgynous texture to his voice and shows his habit of two-word sentences that act as clues to an unknown story before being distorted with a decoder. All the while electronics bubble and swirl as if grumbling in displeasure.

Whilst Omala may have been engrossing but too cold in its personality and He Said Omala may have been warmer but lacked variation and required perseverance from it, A.Karperyd’s solo album Woodwork has been chiseled to perfection by ticking the positive boxes from his collaborations and exploring different avenues within one release. Unlike early work, it’s completely instrumental yet contains the glitchy beats and dissonant compositions practiced in other projects. Each track feels like it paints its own virtual environment that we are obliged to enter. Although it was recorded in a cabin in the countryside which gave the album its organic title, the overall connective theme seems like it’s based around different elements of technology existing within city environments.

The electricity-fueled world of “Public Transport” focuses on television. As if sucked inside a parallel dimension inside a TV set in Poltergeist fashion, transmission and intercepted signals exist around you like air and you can hear the blurry sound of anonymous television shows struggling to maintain their picture quality. The world of “Rejected and Rewarded” engulfs you into the digital skies and binary trees of The Matrix, it’s futuristic yet at the same time it’s reminiscent of dial up internet in the late 1990s.

A pumping bass is the most anthropomorphic quality and it imagines footsteps of a gang in black and white suits walking down an urban street (the aforementioned city theme) being pestered by scattering computer mosquitoes. Helicopter propeller sounds and squeaky cutlery add to the frame in what it becomes an anticlimax. “Low Light Conditions” is a combination of “Rejected and Rewarded” and “Public Transport”. It applies the disorientated frequency of modem sound with static TV noise made freaky by an eerie and aimless synths as the heartbeat bass unpredictably pumps. Although unidentifiable speech give the world a more relatable quality.

“Villovägar” is an old Swedish expression that translates as “false path“. As A.Karperyd explains: “When you walk in the forest and paths divide and and (then it) goes in the same direction, meet(s) again and divides. Suddenly you realise you have taken the wrong turn and have to go back a bit. You are lead astray for a while but end up in the right place in the end. That’s kind of Villovägar“. It’s a good choice for the name as the mellow trip-hop ambiance itself feels it’s a voyage into the unknown and undertaken alone, as the character walks through a forest and spots snappy sparkles hidden inside it branches.

“Winter Tone” and the shortest track “Correlation And Dependence” use electric guitars to create a rhythm. The latter is surrounded by fluttering and levitating blips which pollute the stratsophere but are also pretty heavenly. The former gives the instrument the appearance of a monster awakening in a robotic apartment as it drones beneath the automatic systems with winery distortion and grumpy feedback.

The title track of “Woodwork” is a 11-minute epic that adds elements to its world piece by piece. Rising sounds and ingredients create convincing clarity but the world is totalitarian and functional. Beginning with beats bouncing like the motion of an abandoned basketball in drizzling weather, mysterious steps take the listener onto a journey that ripples as if it’s a dream, where the dreamer is the spy in the story. The environment is steamy, hopeless, stale and cold like a factory and the bell-like synths suggest a sense of urgency in the role of its slavish participants who make woodwork like clockwork. Fortunately the late-arriving keyboards feel like it will lead to something warmer and more encouraging for its employers.

Working as a graphic designer, A.Karperyd has learnt to be precise with his crafts, to give them to a consistent and meaningful concept in different media forms and to make them his own unique representations. Accompanying the CD release with photography and smart branding, Karperyd remains an innovative yet culture figure in Swedish art – not just in music – that silently inspires other musicians with his sounds of the future. Woodwork is out now in Europe on all digital outlets, purchase it here, but make sure you can get your hands one of 105 limited edition vinyl boxes here.