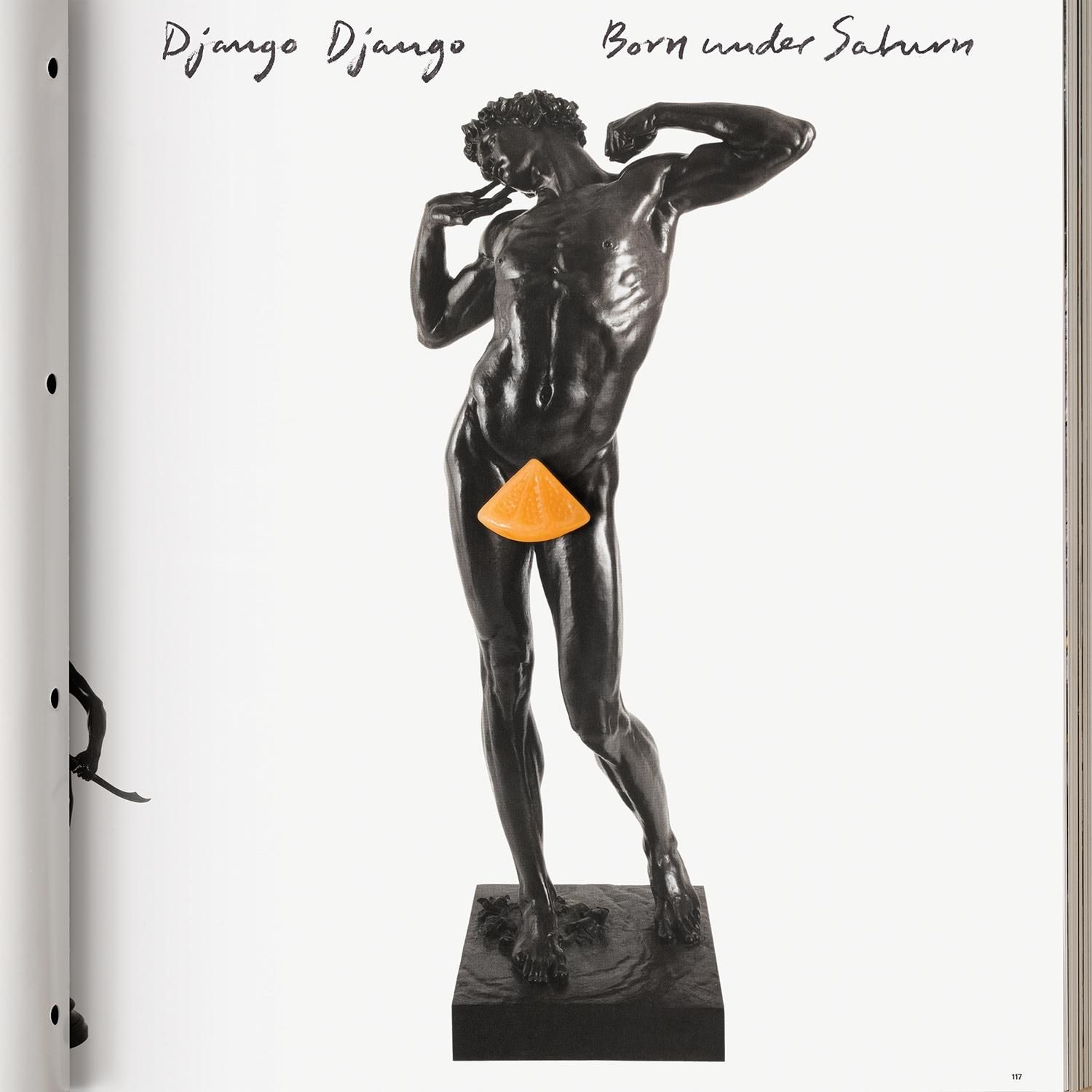 Django Django’s sophomore album is entitled Born Under Saturn but to be saturine is to be gloomy, melancholic and bad-tempered and that’s not exactly the description usually paired with the more joyful London-based psychedelic art rockers. Perhaps the planet Mars would have been a more suitable fit as it’s an astrological metaphor for courage, boldness and dynamism. Attributes the quartet demonstrated through their musicianship and eclectic compositions on their debut.

It could be described as a magic carpet ride, that eased through locations outside of the city and that seem to be associated with sand. This sand connection was portrayed by the exotic mix of genres and double-meaning parables. The sand of the beach in the surf rock of “Life’s A Beach”, the sand of the desert in the album cover and the harmonic song “Love’s Dart”, the sand of Egypt on the modern revamp of Egyptian music on “Skies Over Cairo”, the sand of a desert island in “Silver Rays”, the sand of a western movie in the confident “WOR” and the sand of Carnival culture on “Waveforms”. You could also imagine that a pollution-free place where you see comets soaring past (as mentioned in “Hill Bop”) would also be of that nature and was one of many references to astronomy in their work.

Many aspects of Django Django’s follow-up remain loyal to their idiosyncrasies and shouldn’t scare off their constellation of fans. There’s still plenty of experimentation with a child-like curiosity, the distinctive, structured and 1960s-inspired four-part harmonies (sometimes overlapped perfectly and sometimes off centered), odd stories, folktronica and exotic touches in percussion. The bridge of “Reflections” introduces the saxophone for the first time, although it’s performed by James Mainwaring of Roller Trio. Before it reaches that stage, it has a lively yet measured IDM/alternative dance tempo a kin to Hot Chip and Caribou, which will allow the band to go on a extended rave frenzy during their headline show at this year’s Reading and Leeds Festival.

The same vibe is also felt on the city-escapism of “First Light“, which contains the similar mirage obscurity of “Love’s Dart“. Thankfully, “Found You” reminds us of their genius fusion of nostalgic folk and keyboards. A güiro guides us into the percussive loops and bonfire harmonies – that are initially backed by rotating synths and hauntingly enticing keys – before disorientated twists and turns in the bridge. It’s appropriate for a song with a Faust mythology behind it.

“Giant” is a nod to their Pond-like neo-psychedelia with low-frequency oscillation, hypnotic echoes and a jamming ending but it’s worth noting that their rapid phrasing of lyrics and how Vincent Neff and co. reach a falsetto pitch is reminiscent of another art rock band; Everything Everything. “Shake and Tremble” will be one of the highlights for fans of the masculine “WOR” and brings the rock and roll of Henry Mancini’s “Peter Gunn Theme”.

It’s unfortunate and surprising that they are dud moments on Born Under Saturn, that threaten to be tagged as boring and lack the addictive hooks. A direct contrast to the non-stop exhilaration of their self-titled debut. There’s also something less human or friendly about their personality, exemplified by “Break The Glass“. The interesting premise of “Shot Down” being about a Reservoir Dogs-esque heist failure is ruined by an anti-climatic chorus and lacklustre vocals. Maybe we are so accustomed to their shape-shifting oddities, that anything too straight forward seems mismatched and can not be saved by their occasionally numb vocal performances.

A similar problem bestows upon “High Moon“, which also drags on in lethargic fashion, despite the interesting Moroder-like synth pop. “Pause and Repeat’s” resurrection of the tropical festival atmosphere and the evocative line: “heaven sold out and it won’t take anymore“, save it from being a miscalculation of ideas. Still with those microscopic complaints aside and in a galaxy full of musical stars, Django Django still shine brighter than most. Born Under Saturn is out now via Ribbon Music, purchase it here.