There are many band members who have released solo records and one of the best things about these releases (apart from the music) is the ability to see exactly what the individual brings to the collective. In the same way that Panda Bear’s solo records (most recently Meets the Grim Reaper) display his contributions to Animal Collective tracks such as “My Girls” and “Daily Routine”, In Colour displays what Jamie xx brings to The xx. The controlled ecstasy on such tracks as “Loud Places” featuring Romy, show that Jamie’s contributions to his band are extensive, but what is most impressive is the diversity on show on his debut solo record.

In Colour ranges from emotive to all-out bombast; the latter of which, alongside Jamie xx’s background in remixing and music production, is prevalent in “Gosh”, the album’s opener. The sampled vocals, repetitive beat and space rock keyboard piece towards the end of the track lend a strength to this rave–infused track that allows for an immensely satisfying listen. “Gosh” would not be out of place in a club setting and it forms an ear-drum perforating opening salvo for one of the most highly anticipated records in British electronic music of 2015.

Alongside the diversity in energies, dynamics and textures that are on show throughout the record, there’s a clear range of genres that Jame xx has taken from his musical palette. While there’s an assorted mixture of electronic genres such as house, rave and post-dubstep present, we also hear shades of Trinidadian steel drum music on “Obvs” and Jamaican dancehall vocals on “I Know There’s Gonna Be (Good Times)” are infused with hip-hop beats. What this does is allow for the record to instil a level of intrigue throughout a precursory listening experience which then encourages repeated listens.

Alongside each of these sundry influences is the dream pop/indie music that forged Jamie’s fame as a member of The xx. Each of the tracks holding these influences feature one of his The xx bandmates (Romy Madley Croft and Oliver Sim) as they make understated but impactful appearances. Of the eleven tracks on In Colour, the pair feature on three; “SeeSaw”, “Stranger in a Room” and “Loud Places” and each is a particular highlight for one idiosyncrasy or another. “Seesaw” and “Loud Places” each feature Romy and her soft, delicate vocal. Of the two, “SeeSaw” is a more ambient track (with a further collaborator in Four Tet), but the more impressive of the pair is “Loud Places”.

The song tells the story of how two former lovers begin down new paths as separated individuals and how they overcome the emotional chaos they’re subjected to. Romy’s perspective is that “[she] goes to loud places to search for someone to be quiet with” and that she also goes to “places where [they] used to go” in an attempt to alleviate the tumultuous emotions she is imperilled with while “[he] goes to loud places to search for someone who will take [him] higher than [she] took [him]”. When really listening to the song, the message is a harrowing one – especially for anyone undergoing a similar experience.

While Romy’s features are more impactful, Sim’s contribution is also a striking one. His work on “Stranger in a Room” is highlighted by his crisp vocals, and an electric guitar part forms an atmosphere that keeps one ensconced. His lyrics tell a story of an introvert who wishes to simply disappear into a crowd and this is one of many traits that this track shares with The xx’s band work, as the lyrics are just as cryptic as such tracks as “Crystallised”.

On many records, the final act is what lets them down. Many artists let the record phase out of a listener’s consciousness with a disappointing climax, but Jamie xx was not about to carry out this travesty of an ending. Compared to the rest of In Colour, the final two pieces are more akin to “Gosh” as xx closes out the album with the same grandiosity he began with.

“The Rest is Noise” and “Girl” utilize pulsating beats to produce a club atmosphere and are highlighted by the piano situated in the middle of the former track as the progression moves from chilled to elation then to energetic. A euphoria is formed by the duo of (mostly) instrumental pieces (“Girl” uses sampled vocals) and it’s an impressive way to close out a record that could very well be the best electronic-music-based record of 2015.

What is evident throughout In Colour is that Jamie xx’s song-writing does not let down his already proven production resumé. xx’s work with such artists as Gil-Scott Heron and The xx has been limited to (almost solely) production and this record illustrates with such tracks as “Loud Places”, that he has a significant skill at forming coherent songs that can be sung by fans at live shows and festival appearances. Furthermore, with “Loud Places” and “Stranger in a Room”, it would appear that Jamie xx is capable of forming a more effective The xx, than The xx can, as he can create emotive, textured pieces that purvey a message with an discreetness that his band often strive for.

Jamie xx’s In Colour is out now on Young Turks, purchase it here. 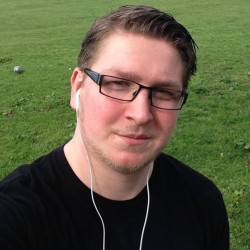 Matt Hoyle
I've had a life-long obsession with music, originally exposed to Queen, Tchaikovsky and Led Zeppelin at a young age, I began to explore a wide range of genres as a teenager. I now listen to a great many bands/artists and aspire to write about music in the future.

About the author: Matt Hoyle

I've had a life-long obsession with music, originally exposed to Queen, Tchaikovsky and Led Zeppelin at a young age, I began to explore a wide range of genres as a teenager. I now listen to a great many bands/artists and aspire to write about music in the future.. Follow him on Twitter / Facebook.