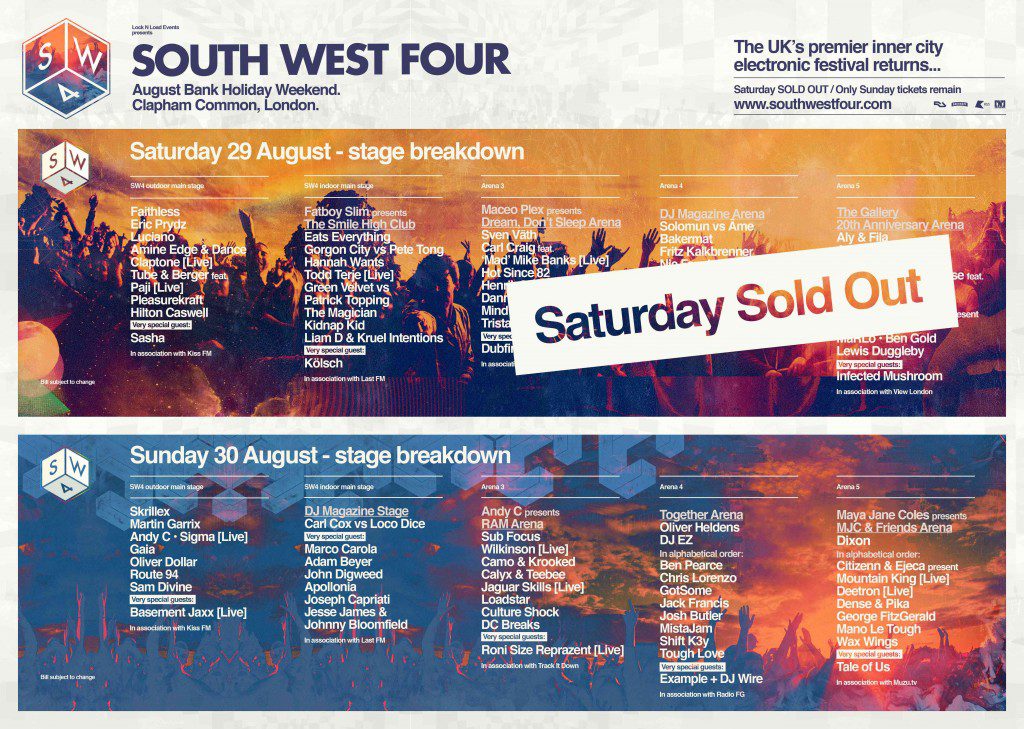 South West 4 Festival returns this summer to Clapham Common for the 11th edition of South London’s most popular weekend festival, it shouldn’t be underestimated just how difficult it has come to be, to do anything music related in London over the last five or six years. Venues have been closed, licenses revoked, trouble started and events, clubs and crowds shut down.

However South West 4 continues to go from strength to strength; where last year’s 11th anniversary special was packed with 80 heavyweight names in Dance and Electronic music, the likes of  Marco Carola, Alesso, Paul Kalkbrenner were all on hand spinning the ones and twos of the highest order Deadmau5 made his South West 4 debut and closed the entire show, this year’s edition shows no sign of being a fallow year.

South West 4 Festival in 2015 is expanding, not only in popularity but for the first time ever, there will be a second main stage – this increased capacity means revellers will be spoilt with 10 arenas of music to choose from, as well as the biggest outdoor structure to ever be constructed on the Common. A sneaky look at the line up for this one and you begin to understand why this is such a mouthwatering prospect, with Saturday headliners like Eric Prydz and dance music stalwart Faithless, along with Fatboy Slim presenting Smile High Club alongside.

“I’m heading back to South West Four to host my very own arena on Saturday. Normally that means you just put up a bit of bunting, but we’re trying to take it further with something called Smile High Club. We’re creating a movement called Random Acts of Smiles – it’s an excuse for some acid house smile face high jinks. The Smile High hostesses will be your stewards making sure you have a comfortable ride“, Fatboy Slim told DJ Mag earlier this year.

Saturday’s line up shows a wealth of artists like Anjunabeats, Eats Everything, Kidnap Kid, Hot Since ’82, Sven Vath, Pan Pot, Solomun Vs. Ame, Paul Oakenfold, Hannah Wants, Todd Terje (live), Infected Mushroom and Claptone (live) as well as a whole host of others. If you haven’t already snapped up a Saturday ticket, you’ll be sad to know that they’re no longer on sale, the huge excitement for this one has meant both Saturday tickets and combined weekend tickets are already sold out.

However it’s not quite all doom and gloom if you’re still wanting to put an appearance in on the Sunday, tickets are still available, both standard and VIP. The good news if you already have your Sunday ticket however is that both the Saturday and Sunday bills are equally strong. Where ravers will be treated to the incredible Faithless on the Saturday, skankers will be spoilt with South London’s very own Basement Jaxx live on Sunday.

Twelve years in and South West 4 continues to push the boundaries for UK electronic music festivals, the development has already taken a new direction with the introduction of a second main stage and 10 arenas of music, more than making their ambitions clear, 2015 will be the biggest installment to date and looks on course to top the 2014 edition which was widely regarded as their best ever, and resulted in winning the coveted ‘Best British Festival’ award at the DJ Magazine awards. Get your standard and VIP Sunday tickets here.