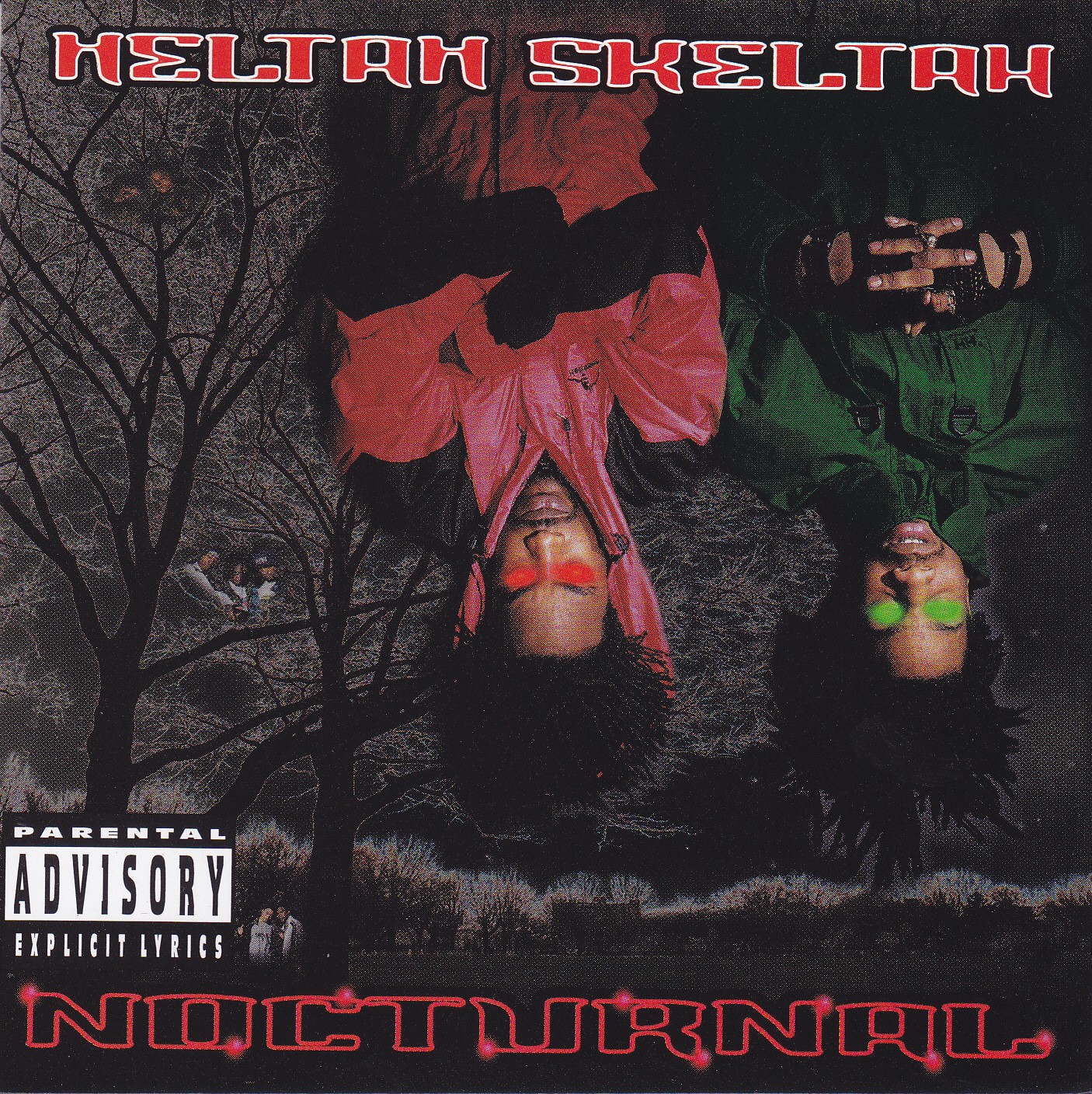 Heltah Skeltah’s Nocturnal is a record that was born in the gutter and has dripped filth and grime since the day it was conceived. As the name suggests, Nocturnal is a product of the dark side of New York City, written in isolation from the glitz and glamour and crafted by those immersed in a life lived on the corner. It gives a flavour of the streets in the infamous Brownsville, a.k.a Bucktown, area of Brooklyn and survives today as an artefact of the East Coast Hip Hop scene in the mid to late nineties.

Unfortunately, the album is often overlooked and not included in lists of noteworthy records from the golden age of Hip Hop. Even more tragic was the untimely death of Heltah Skeltah member Sean Price last month, aged just 43. Therefore, it is only right that we dig into the crates and take a much deserved look at this album.

Nocturnal was released in June of 1996 by Priority Records and was Heltah Skeltah’s debut album. The group was part of the Brooklyn rap collective the Boot Camp Clik, which included groups such as Smif-n-Wessun and O.G.C among others. Heltah Skeltah was comprised of Sean Price, who in those days went by the name of Ruck, and fellow rapper Jamal Bush, a.k.a Rock. Together both rappers proved a formidable combination. Rock spat hard and abrasive bars with a voice that sounded like he had been mixing down his cereal with gravel. On the other hand, Price brought a slicker and more potent lyrical style coupled to a serpentine flow.

The beats were crafted by the Boot Camp Clik’s in-house production team Da Beatminerz, as well as by a few guest producers. All the instrumentals are deliberately dark and are similar to the raw basement sound RZA was making for the Wu-Tang Clan over on Staten Island. Although the production on Nocturnal is more refined than a lot of the Wu’s material, it still holds a lethal edge against which Rock and Ruck sharpen their hardcore style of rapping.

This is demonstrated immediately on the first cut of the album. In all honesty, “Here We Come” hasn’t got the most thrilling instrumental. However, it does have popping snares and a sly guitar sample that provide an ample platform for Rock to unleash some hard hitting lyrics. He throws out imagistic rhymes of him and Ruck as night-time predators who own the streets they roam on; a theme continued across most of the album: “We-a snipe ya, we see in the dark like an owl/ So we prowl understand the plan is operation lockdown”.

The album is unarguably aligned with the battle mentality that is present in Hip Hop culture and especially its hardcore sub-genre. Many of the lyrics are aggressive and seek to put down any potential contenders. “Place To Be”, produced by Shawn J. Period, is an example of the duo laying down bars to this effect. Interestingly the analogy of themselves as owls – also evident on the reverse cover of the album – is continued on this track through double entendre “You don’t wanna be the target when I fly the coupe”.

Nocturnal also maintains a certain level of humour. There are a few skit tracks – “Who Dat?”, “Gettin Ass Gettin Ass” and “Outro”. These are usually found in Hip Hop records and are not much more than filler material, but here they indicate a taste for the funny and light-hearted. This is epitomised no better than in the opening line of the album: “What the hell was your d**k doin’ in the milk man?”.

Refreshingly, in addition to humour, there are also moments when Rock and Ruck turn their lyrics on themselves in self-reflexive introspection. The aptly named “Therapy” sees Rock assuming the character of a patient seeking psychiatric help from a doctor, in this case Ruck, for the violence and aggression he sees in himself. This track was one of the singles released off the album and features Vinia Mojice singing on the hook and production from Baby Paul of Da Beatminerz.

“Therapy” is an instance of self-aware clarity amid the griminess and hardness of the rest of the record. Ruck gets philosophical with some crafty wordplay that changes up end of bar rhyming; he spits:  “Typical black life you jack knifes under a sea biscuit / Get specific and stop f**king around with that crack pipe”. Although different from the rest of the album due to its lighter R’n’B style, the track does not stray into a completely different realm. However, the difference there is suits the content of Rock and Ruck’s lyrics.

The tracks “Lethal Brains Bro” and “Undastand” are some of the album’s highpoints. Both have accomplished beats produced by Baby Paul and give Rock and Ruck something to work off. The former has a laidback and jazzy sample that has a broad and rich orchestral sound, whilst “Undastand” has a shimmering set of smooth keys that descend over grainy hats and crunching snares. Each beat creates an atmosphere that tows a line somewhere between being chilled and eerie. Baby Paul’s adept filter work keeps everything feeling fresh on these two tracks.

Other high points on the album include “Da Wiggy”; an old school beat with not much more than a dusty break, bassline and a sprinkling of samples intended to create atmosphere. Ruck spits some mean bars on this track letting, “So chill chicken, ‘fore I choose to chastise, bruise / Batter and baptize, bitches and bums / With blood from black eyes, when I slap guys”, glide effortlessly out of his mouth. A further honourable mention is “Sean Price”, which sees Ruck and Illa Noyz taking it in turns to rap over a beat produced by guest producer Shaleek. This track has a nice touch by warping Ruck’s vocals to make him sound like a demon.

“Leflaur Leflah Eshkoshka” is another strong track on the album. It was actually made under the moniker of The Fab 5 when Rock and Ruck teamed up with fellow Boot Campers O.G.C. The beat is well crafted with nice sample selection, allowing everyone who jumps on it to get busy, especially Rock who pounds out the rhyme heavy and witty : “Get set, go, which you do, crews screwed, I blew through / Two crews who claim they got funk, may be true cos they doo-doo”. “Operation Lockdown” is a good close to the album with a beat produced by E-Swift from Tha Alkaholics that has a delicate harp sample and banging drums.

The approach that Rock and Ruck choose on Nocturnal means they are knee-deep in the darkness and aggression that defines the hardcore genre. Sometimes this style of Hip Hop can become questionable in terms of what it seems to advocate and glamorise. Rock and Ruck arguably succumb to being unsavoury, however, it would seem they are not blindly absorbed; a lot of what they are saying is clearly hyperbole, performance and tongue-in-cheek. Over the course of the record, they have fun expressing themselves, engaging in inventive word play and exploring their own mental states, all the while painting a vivid picture of their home, Bucktown.

Although it is a minor classic, Nocturnal will never feature in any “top tens” due to the filler tracks on the album. There are definitely moments when the beats don’t shine and the duo’s lyrical content becomes homogenous and flat. “Soldier Gone Psyco”, “Clan’s, Posse’s, Crew’s & Clik’s”, “The Square (Triple R)”, “Prowl” and “Grate Unknown” are such instances. However, it is always fun hearing Rock and Ruck revelling in their own ego and trying to convince you they are the hardest crew in Brooklyn. All in all, this album is a forgotten gem that garners little of the attention that it deserves.

Nick Bimson
I am 23 years old and a recent English Literature graduate. I love music and have an eclectic taste. I am open to any kind of new, interesting music but I also have a passion for discovering hidden gems in the music of the past. My main areas of interest are electronic music, hip hop, soul, funk and jazz. I also enjoy reading and writing and have been contributing poetry to an online arts and culture magazine which goes by the name of Foci.

About the author: Nick Bimson

I am 23 years old and a recent English Literature graduate. I love music and have an eclectic taste. I am open to any kind of new, interesting music but I also have a passion for discovering hidden gems in the music of the past. My main areas of interest are electronic music, hip hop, soul, funk and jazz. I also enjoy reading and writing and have been contributing poetry to an online arts and culture magazine which goes by the name of Foci.. Follow him on Twitter / Facebook.