The other week we discussed whether pop music was any good these days, and now we shift our attention to today’s rap music. When I was at school, in the early to mid-Noughties, in retrospect, it seemed we had a plethora of artists to choose from, even from the mainstream. Those days of MTV Base were the last I can recall where I could watch videos back to back, and not want to change the channel.

When I started secondary school, there was Eminem’s The Marshall Mathers LP (2000). Basically my introduction to rap.  I believe I got it as a Christmas present. It was the most violent thing I’d ever heard, and I’ve been corrupted ever since!  However, the likes of “Stan” really came at a time when my knowledge of the world was slowly widening, and I could argue it helped shake me out of my preteen naivety and inform my teenage years.

Arguably it may have aged me beyond what is ideal, and etched away at what remained of my childhood, but the album was one of my tools that enabled me to try and keep up with an ever more cold world. His delivery was, generally on the album, viscous, but there’s something lacking in Eminem’s stuff these days; like he’s changed his voice, because he no longer has that alter ego anymore that I grew so accustomed to. He’s maybe more true to himself these days, but I can’t say I’m a fan. I don’t have any of his releases beyond 2003’s The Eminem Show.

Then there was Dr Dre’s 2001, which actually came out the tail end of 1999. If I recall correctly, I was in the supermarket with my dad, and when I asked if I could have it, I was rebuffed – I assume there was enough bad language in the house without me owning anything in excess of The Marshall Mathers LP. I probably got a friend of mine to let me borrow a copy, maybe even ripped it.

To me, I would go as far as saying this album was much better than his supposed 1992 masterpiece, The Chronic.  Although I appreciate the latter a bit more, nowadays, I still stand by the assertion that 2001 is better. “Still D.R.E.” still resonates every time I hear it, and I haven’t got sick of it yet in the slightest. It rushes to the head, empowering and hypnotic.

I really began listening heavily to Ice Cube, as well, after having got copies of War & Peace Vol. 1 (The War Disc) and War & Peace Vol. 2 (The Peace Disc), one of the first times I properly started delving into someone’s discography. The Peace Disc (2000) was chock-a-block with singles and other highlights that could’ve been singles. 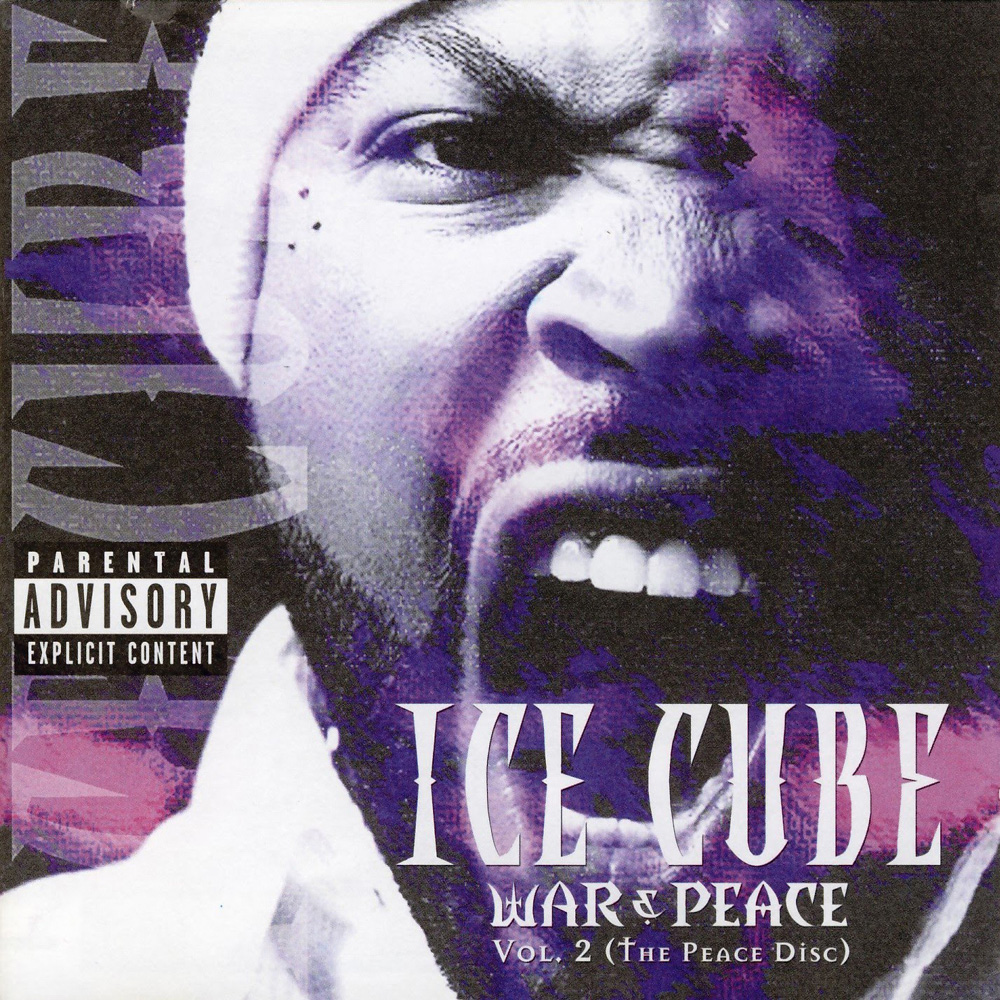 New Jersey’s Redman should definitely play a part in this discussion, too, because in terms of my growing interest in him, he became like an East Coast Ice Cube to me. Of course, they’re completely different, Redman zany and Ice Cube, more straightforward. Redman’s “Let’s Get Dirty” and “Smash Sumthin’”, both from 2001’s Malpractice, were two of many videos I could expect to see whenever I got the living room television, and MTV Base, to myself.

I also stood a good chance of hearing at least one of them at the end of one of many school discos, usually after enduring dance and pop drivel. Another one that had me hooked was his Method Man collaboration, “Da Rockwilder”, from their album together, 1999’s Blackout!. Embarrassing enough, I used to daydream and pretend I was Redman to this track, and my school friend as Method Man, whenever this came on.

I was also getting into Nas and Jay Z just about when their feud was kicking off, for ultimately who would be crowned King of New York. Those who can remember LL Cool J’s many battles in his heyday even cite this as one of the best and exciting battles of wits in the genre. “Takeover”, from Jay Z’s 2001 The Blueprint humiliated a Nas, who Jay Z suggested had fallen off a long time ago, using a fantastic Doors’ sample, “Five to One”.

Nobody thought Nas could recover. His comeback album, 2001’s Stillmatic, had a track that would prove otherwise.  “Ether” is basically considered one of the best diss tracks ever recorded in the history of rap music. No feud in today’s rap music industry even comes close to the excitement there was, watching these guys trade blows.

Going from those highs of the genre, I found myself gradually railing against what was an emerging trend of Southern ‘Dirty’ South rappers. Ludacris, on the other hand, who’s got bags of talent, I had a lot of time for. His flow’s ridiculously fast and employs countless tongue twisters. However, one particular song of his, “Move B**ch”, heralded increasingly inane hooks within the genre. There was, fortunately, enough within the genre to distract me from this.

It wasn’t until about 2003 and 50 Cent’s Get Rich Or Die Tryin’ that I felt the rot was about to set. There wasn’t anything that was massively disagreeable to me about the likes of “In Da Club”, but I found it all rather unremarkable. I was soon leaning towards hard rock and heavy metal. Regarding the scene developing in the mainstream of the Dirty South, I had plenty reason to have strayed away. Usher’s 2005 club floorfiller “Yeah!”, featuring the aforementioned Ludacris, and irritating ‘Dirty’ compatriot Lil Jon, did more to anger. Rap geared for clubbing had turned for the worst.

A year later Nas declared with his latest album, that Hip Hop Is Dead. He appeared to point the finger of blame at the ‘Dirty’ South. Fast forward to 2014, and there’s Fetty Wap’s “Trap Queen”. It was released independently that April. It’s a consequence of Nelly’s singsong rap style. He can definitely ride a beat and rhyme, but the whole thing sounds annoying and repetitive.  His individual flows go on for far too long, and sounds more irritating than impressive.

It doesn’t end there, either. Come the end of June 2015, we were to tolerate the totally nonsensical ramblings of yet still current artists, like Silentó and his “Watch Me (Whip/Nae Nae)”. He’s described as a rapper, and for what reasons, I’ve no idea. He proceeds to name various dance moves on this record, and he couldn’t even sequence them together in an order that rhymes even once. The latter end of that July, and the mediocrity continued with “Watch Out” by 2 Chainz. The clapping drums punctuate repetitions of ‘rich’ and ‘b**ch’, and not much else other than a quite simplistic piano sample.

A few months later, in late November, Young Thug released “Best Friend”. The title is perhaps a little misleading, and seems not heartfelt in the slightest. The minor key tinkling on the piano is unsettling, and so is the subject matter, which doesn’t go much beyond how tough he thinks he is, and other things braggadocio.

What’s more, there’s an annoyance in this New Year of 2016. The beat for Travis Scott’s “A-Team” itself works, and is quite hypnotic. There’s the persisting singsong rap, but this time it’s in autotune. The latter just kills it for me and doesn’t work well with what’s generally a lazy flow.

As recently as earlier this month didn’t fare too well in the rap world, neither. The remix of “Down In The DM” by Yo Gotti has those rattling drums that the aforementioned ‘Dirty’ South made famous. It’s got that intimidating and menacing minor key keyboard punctuating the beat; and the subject matter, regarding hook up websites, is totally inane.

However, there are a good few artists that I feel are currently carrying the flame for Rap and Hip-Hop. Kendrick Lamar would be up there, as a prime example. Last year’s “King Kunta” from his Grammy Award winning sophomore album To Pimp A Butterfly, is funky, like any good West Coast track worth its salt; but the bass is slightly more subdued, like the sample heavy songs of New York.

We probably shouldn’t mention Kendrick Lamar, without also mentioning J. Cole. His 2014 Forest Hill Drive album proving to be one of the highlights for Hip-Hop last year, while Common’s 2014 collaboration with John Legend for the Selma soundtrack “Glory” deserves a mention, so does Wale’s “The White Shoes” from his Album About Nothing record.

Earl Sweatshirt also impressed last year with his I Don’t Like S**t, I Don’t Go Outside album, so did Vince Staples with Summertime ’06. Veteran Southern rapper Scarface also came back with Deeply Rooted last year – only going to show that despite the drivel being forced down our throats, there are still some exceptional artists making some exceptional Hip Hop music, if only listeners are willing to seek them out.

One to watch, though, is Irish and Cuban American, Wax. He’s straddled most of this period in question, having been active since 2000 but widely considered of the newer school. His tendency for the more indie and underground aspects, combined with instrumentation, very much make him a considerable and ‘good’ Rap/Hip Hop artist of today.

All this should be tempered with the realisation that each generation has a similar and nostalgic view of their own past:  colour television, then black and white; then no television, just radio.