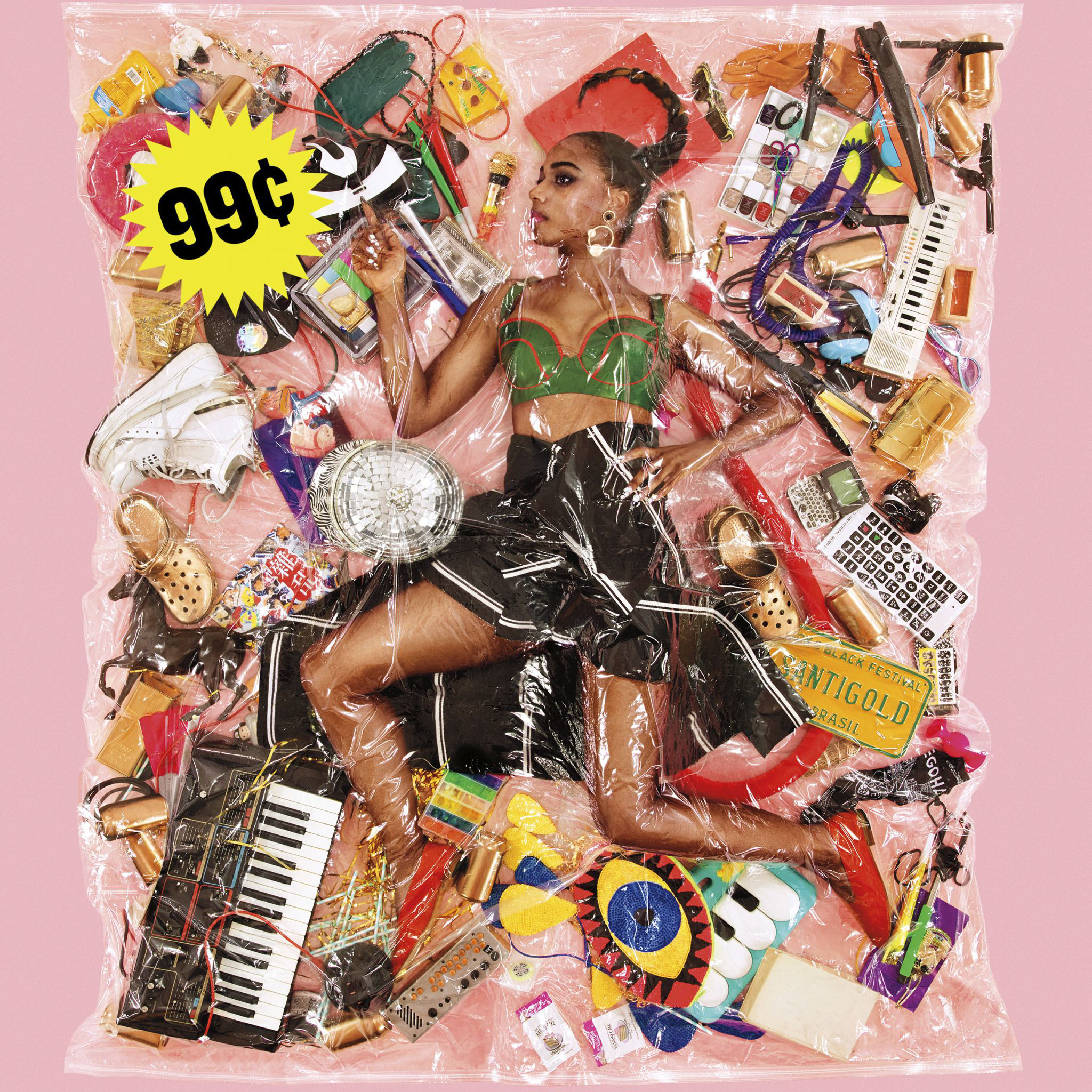 Santigold is an artist who made a name for herself being kind of a musical spaz. Her first big hit single “Creator” posited her to many as a slightly more pop-oriented M.I.A., who she shared some producers (notably Diplo) with. But her first album, the confusingly quasi-self-titled 2008 release Santogold jumped around from dubby electronic tunes like that one, to guitar-ridden new wave ditties like “Lights Out” and downtempo pop ballads like “I’m a Lady”.

While she could have quickly cashed in on any one of her marketable aspects, she actually withdrew from the public eye for the better part of four years, resurfacing in 2012 with the much darker Master of My Make-Believe. Four more years, a couple of high profile features with artists like Major Lazer and A$AP Rocky, and one childbirth later, and she is back again for her third album 99¢. Recording these albums at a slow and steady pace is definitely starting to pay off: while her sound is definitely still recognizable 8 years later, this is easily her most consistent – and best – release to date.

Although it’s not a concept album by any means, there is a recurring theme of consumerism and vanity in the modern age. On the lead single and album opener “Can’t Get Enough of Myself”, she pokes fun at selfie-loving narcissist’s with lines like “If I wasn’t me / I can be sure I’d want to be / I’m pretty major”, over bright horn arrangements, rollicking drums and pitch bending synthesizers.

Considering the fact that it’s dealing with some potentially heavy social commentary, it’s actually a bit surprising to hear that this is probably her most upbeat album overall. Drawing on her time as an A&R rep for Epic Records, she looks at everything from a relatively optimistic, satirical perspective, rather than a gloom-and-doom mindset.

Most of the tracks critiquing the entertainment industry are actually the happier, livelier sounding joints on the record. “Big Boss Big Time Business” is classic Santigold dub where she gleefully sings “I got the key to the system!”, simultaneously sounding like a boast about her artistic success, and a threat to the corporate entertainment business. On closing track “Who I Thought You Were”, she sings a eulogy of sorts to friends who have lost their soul to money over a pulsing synth line that recalls David Bowie’s “Heroes”.

There are still some darker moments, but they are placed throughout the album in a way that feels more natural than the abrupt changes of her earlier work. One of the only bad things I can say about Master of My Make Believe is that the middle of the album feels as if it has a bit of a lag, with one too many slower songs back to back.

On 99¢, darker tunes like “Before The Fire” and “Outside The War” (both of which have some very impressive vocal harmony arrangements) are interspersed perfectly amongst tracks like “All I Got” and “Chasing Shadows”, mid tempo, pitch perfect 80s-inspired pop nuggets, the latter of which recalls Vampire Weekend’s “Step” a bit, particularly with its rhythm and vocal line. From beginning to end, there is a sense of unstoppable momentum. Even iLoveMakonnen’s mediocrity isn’t enough to kill the absolute banger that is “Who Be Lovin Me”.

99¢ marks an impressive leap forwards for an artist who already had a sterling reputation. Santigold is truly a 21st American century pop star in the best way possible; a brown-skinned, well educated, multi-talented woman with a background in everything from playing in a punk band to working in the music industry. Her musicianship, writing and production all are in top form here, with some sharp social commentary to boot. Even if her next album takes four or more years to come out, this is proof that it’s worth the wait.

Santigold’s 99¢ is out now via Atlantic Records/Warner Music, purchase it on iTunes here.