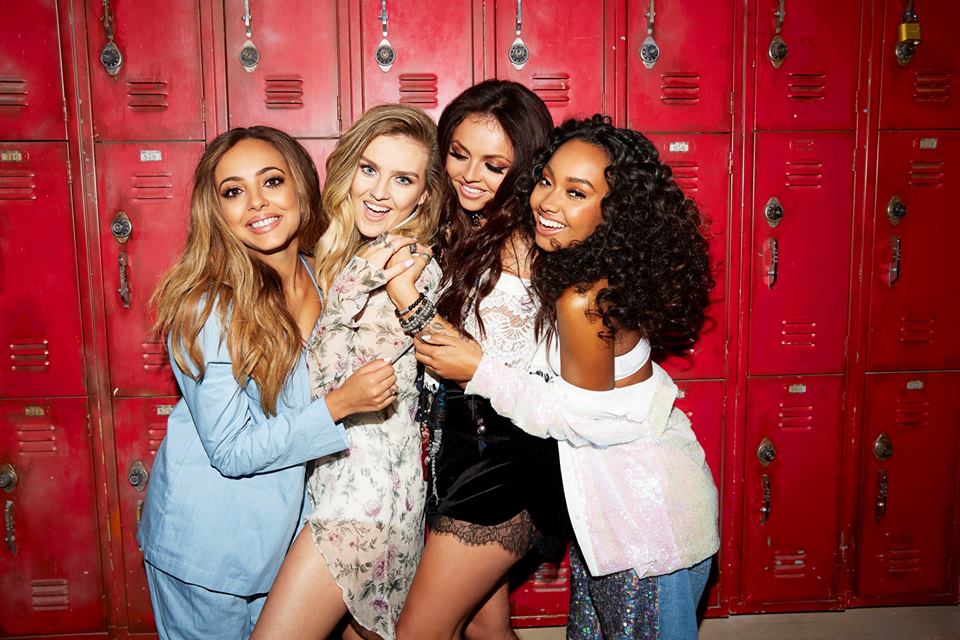 The General Electric (GE) Oil & Gas Arena, Aberdeen’s largest concert venue, was home to Little Mix for two consecutive nights this month, and we went on down to the first night to catch the girl group live.

Joey Devries and Nathan Sykes opened proceedings, before the eagerly awaited appearance of Little Mix. Roving cameras picked out fans at random, the game being their reaction when they finally realised their face was being projected on the three big screens onstage.

What followed were some stunning visuals. The audience were going bananas, especially with the Pink-eque circus routine, nothing routine about it, in a way, of the four girls flying about, elevated way above the heads of the audience.

A prompt costume change soon followed, prompt the key word as their backing dancers ripped them off with the deft hands of magicians. This raunchy show was propelled by pounding drums. They were in twerking overdrive, overtly sexual being an understatement. “Grown” up, indeed. A climatic explosion concluded initial proceedings.

The top screen generally played video clips, with the either two either side of the stage playing live footage for those perhaps a fair distance away from seeing the stage in any great detail. “Hair” followed, and the four femme fatales finally came together centre spotlight, no longer divided by the width of the stage and their backing dancers.

“Aberdeen, what’s going on? Are you ready to get weird?”, asked Jesy. “Change Your Life”, followed. It was epic and triumphant, strings making it mighty. The crowd were urged to clap in unison to the beat, and they gladly obliged.

“A.D.I.D.A.S” came with all four getting grand throne-esque chairs, all draped with silky throws. It was a clicking and infectious track. They all stood atop their thrones, raunchy again the word, spanking themselves to the beat. A key change brought the song to another level. The dancers appeared to imply grabbing at the nether regions of the four stars.

Leigh-Anne then challenged Aberdeen to show off their vocal skills, before the group started their next song. “Wings” was soulful, sexy and pounding. It was tribal and percussive with climatic, soaring vocals, as if to fly. The aforementioned spotlights were gazing upon the stars of that nights show. There was maximum crowd participation and also, at times, blinding light displays.

With the first act finished, all eyes were upon the display screens. These detailed a story of the girls in the back of a black cab, driven by a tad dotty driver. A spooky scene was set, with shocks of lightning introducing the next song of the set, “Lightning”.

“DNA” came after, and the visuals comprised of helixes made of what could be construed as bike chains. This still continued the bleak outlook of the previous track, but slightly more hopeful, as if to overcome the greatest of obstacles. Just.

Shots of flames burst from the stage floor, like a hellbound soul shooting heavenwards in a desperate bid to change its destiny. “He’s from a different strain” perhaps encapsulating this; before the tolling of the bell as the flames grew higher and higher, and the song ended.

What followed was yet another, the third of the night, request for the Aberdeen audience to get their lights in the air. They were also complimented for their irresistible accents during the previous “Wings”. The visuals on the screen were partial views of trees. This, perhaps, was if to say almost clear of the woods, though maybe there was further sadness and opportunity to get lost.

This was one song, “Secret Love Song Pt. II”, straight from the heart, a tinkling piano like heartstrings playing a gamut of emotions. Soaring vocals accompanied the viewer seeing these trees clear, with the sky the limit and the next destination. Only the braches could be seen for the stars. There was the obligatory swaying of lit hands, as the trees were no more. There was a nice touch of acapella at the end of the track.

Strange visuals followed, with the backing dancers wearing massive bunny heads for “OMG”. “Oh my gosh; it’s happening, again”, preceded an electronic groove and percussive rhythms. It seemed to be a heartbreaker anthem for the ladies, all the man eaters out there. “Bye, bunnies”, as the track ended.

Jesy asking, “What’s the difference between a Glasgow accent and an Aberdeen one?”, was fortunate to get a polite, tongue in cheek intake of breath. The audience was asked to stand up, during a medley of other performers’ tracks. The dancing and the lighting made the crowd go jumping beserk.

“Salute” was the song picked for departing from the medley, which was accompanied with the clanging of an alarm in the backdrop. There was a climatic build to the chorus. Syncopated verses were practically rapped in their delivery. The four came together, centre of the stage, to make the title gesture as a mark of sisterly solidarity, and the fans lapped it up. Pyrotechnics launched fireworks at the apex of the chorus.

“Now it’s the time to put the parents to the test” aptly introduced “Little Me”. Dads had the ‘fist pump’ challenge, and mums had the, shouting, ‘hey, girlfriend’ challenge. The song, from 2013’s Salute, might be familiar to many familiar with Xzibit’s debut single, 1996’s “Paparazzi”. Both, as their musical backdrop, sample Gabriel Fauré’s “Pavane”, and Little Mix’s interpretation of it is truly from the heart.

They even sat down to demonstrate the gravity of its content, no accompanying dance routine. It was quite inspiring. Jesy even seemed on the verge of choking up introducing it. The vocal arrangement was a powerful one, suiting the overall theme of the song. They then stood up for Leigh-Anne’s ballsy proclamation. Everyone was in their element, here, concentrating on their individual vocal parts for the song’s overall complexity. Climatic acapella rounded the song off.

The first single, from that 2013 effort, came next. Before that, though, “Little Me” made a brief return, with “Move” playing amidst it. One of the most climatic visuals also took place, with the backing dancers making the girls disappear with the whirl of a cloak. Then it was back to the screens and the cabbie scenario from before, though, obviously, slightly different.

A new set was then unveiled, like an arrangement of freighter boxes as one might see at Aberdeen Harbour. Each were in one above stage level, before coming back down to the stage itself. The cowbell infused rhythm was addictive. The dancers did an impressive spot of breakdancing, fairly making a move.

Following that was the last single, from their 2012 debut, DNA. “How Ya Doin’?” might be familiar to many familiar with the De La Soul’s single, 1991’s “Ring Ring Ring (Ha Ha Hey)”. Both, as their musical backdrop, sample The Whatnauts’ “Help Is On The Way”, and Little Mix’s interpretation was a thumping dancefloor filler.

The grooving bassline, perhaps higher in the mix, was funky and had so much soul. It was a sassy performance with plenty of girl power. Missy Elliot appeared, via the original music video, played on the sceen above the stage. One of their dancers then appeared to have a dig at Drake’s dance moves in “Hotline Bling”.

It was explained that “I Won’t” was about not letting criticism get you down. Apparently, at the time, recording the album was a protracted process and rumours were “flying” around. The audience were urged to “hold your head up” and clap their hands. A back flipping dancer wowed the crowd. This almost distracted from the euphoria of the song, but complemented it at the same time.

“Love You Like You”, following, was slightly raunchy, swinging and soulful. Bubblegum pop, even. Sparklers shot forth into air, sizzling and sensual, more slow burning than sexual.

A light hearted video came after this, demonstrating various weird dance moves. It seemed an instructional guide how to Get Weird, and thus “Weird People” began. The overall sound was like an Eighties’ Prince throwback. The theme and title of the track suited to the multiple, seemingly deliberate, wardrobe malfunctions.

They closed proceedings with “The End”. After this, though, thunderous feet stamping came from all over the arena, urging an encore. There was a backdrop of stars camouflaging another costume change, sequinned suits. Everyone got on their feet, stomping to the beat of “Black Magic”, of 2015’s Get Weird, this beat inciting the crowd to get animated. Its middle section, those drums, urged for crowd participation. Confetti flew into the air, and back down awash all over a grateful, satisfied Aberdeen audience.