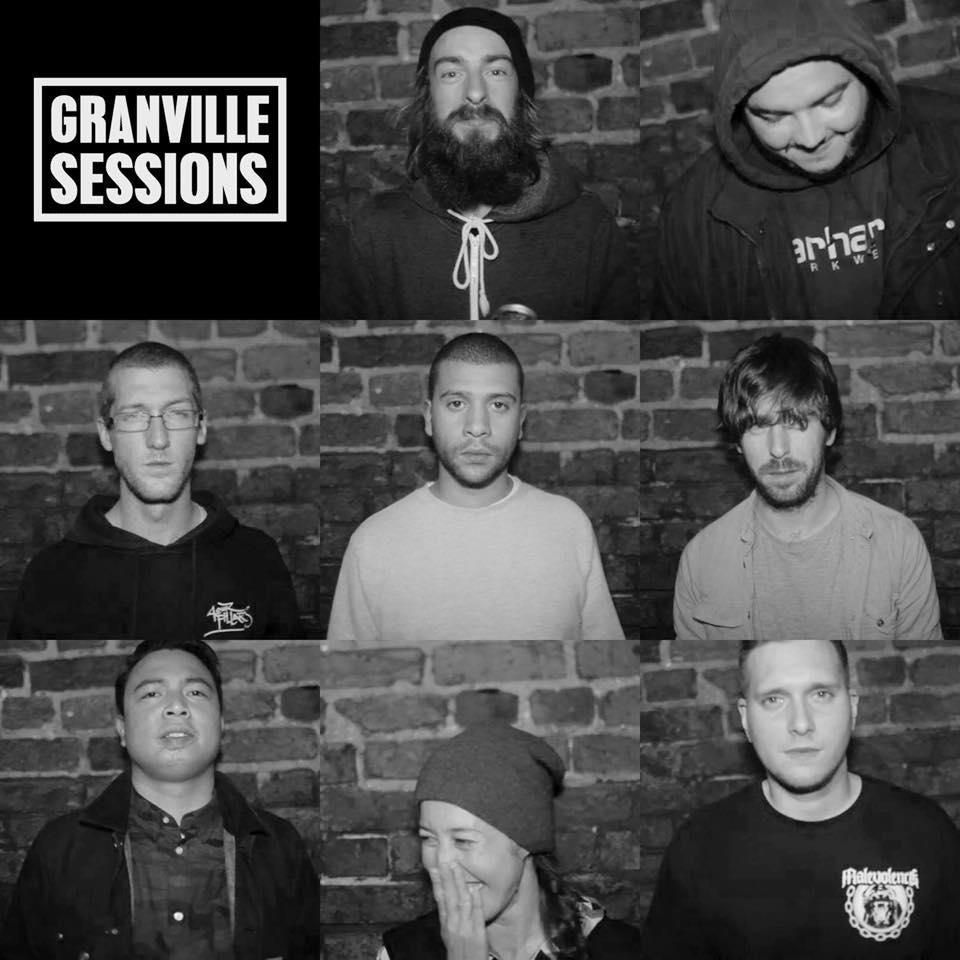 We’re excited to premiere the new Granville Sessions single “Calgon Sunrise” exclusively, before it comes out this Friday, June 10.

The band is a live, clever eight piece hip-hop group based out of South London. They consist of three emcees, Luca Brazi, Archetype, Mnsr Frites; plus Jon Ball on guitar, Marvin Javier on bass, Louis Dale on drums, Jude Eyton on trombone and Johnny Woodham on trumpet.

The band have a strong combination of heavy rhyme styles, and integrate traditional sample based hip-hop beats with the backing of a live band. The band’s vibrant live shows have allowed them to share the stage with the likes of Congo Natty, Pharoahe Monch and Chali 2na (Jurassic 5), and they have performed at the world-renowned Boom Bap Festival and Boomtown Fair alongside Ghostface Killah, Dirty Dike and Rag N Bone Man.

They’ve already released two critically acclaimed albums, the first being 2011’s No State and the second 2013’s Forward. The former was included in KMAG’s ‘Top 10 UK Hip Hop albums of 2011’, and the latter shortlisted for Wordplay Magazine’s ‘UK Hip Hop Album of the Year’. Wordplay Magazine had the following glowing recommendation of the group: “The collective who hail from London show listeners what a pure heavy sound of hip hop accompanied by a live band should sound like”.

Having gigged extensively across the UK, the band are now steadily working towards the completion of their new album. Their previous single, “Leave It”, has already been featured in BBC London’s Introducing show, and they have been featured in Timeout London’s ‘Five London Hip Hop Acts You Need To Know About’.

“Leave It” starts elegantly, but the band comes crashing in and the mood changes completely. It has rocking, groovy bass in flight with some rock guitar chords ringing out. The sung hook is rousing, aided by triumphant trombone and trumpet. The middle section features climbing, driving, bass, drums and guitar. A final flourish features ringing organ before the song’s end.

Their new single “Calgon Sunrise”, which we are premiering exclusively here, rings menacingly with tinkling piano keys, paradoxical in a way, chopped like a mechanical arm swinging down on the heads of the innocent. The matter of fact, yet braggadocio raps suit the deep, bassy backdrop.

They syncopate with the drums seamlessly, tightly condensed rhymes making for expert flows. There’s intermittent wails of distorted guitar. The sound of the instrumentation, combined with rappers with a height of Wu-Tang Clan seeming persona, makes for believability; synchronicity of lyrics and music.

Then there’s a pause before the grim proceedings recommence. The remaining minute has a spot of slightly more tuneful guitar, yet like yelps of pain and the screeching of tortured souls, before an eerie percussion rings out for a childlike innocence fadeout: a creepy horror movie where everything sounds delicate, fragile, but really is life threatening and, yes, indeed, grinning menacingly.

Their bleak soundscapes might remind one of New York doom mongers, Mobb Deep, or the more horrorcore elements of DMX. Both, perhaps, having their roots in a lot of what Scarface’s group, Geto Boys, did prior. However, the latter isn’t overdone as such to render it gimmicky. There’s the right dose of reality and intelligence in the lyrics to stop it getting too Hollywood.

If this track is anything to go by, this group are one to look out for, indeed. Their gravitation towards at least some live instrumentation definitely lends them a hand in crossing over to, particularly with the guitar work, and the like, rock audiences. Combine that with a harder edge than most alternate hip-hoppers, and you have something that isn’t boring, indie and bland. Furthermore, this would follow on, logically, that the group would make for some exciting watching, too, in the live context.

Granville Sessions, with this offering, has provided something hardcore and horrorcore, yet leaves you in no doubt that the lyrical content is, in any way, a flight of fancy. They’d perceivably bring together two quite different crowds, rock and rap, to the same stand in a music store; and at the same venue at the same time, to boot. An all and all must-see for any discerning music head.