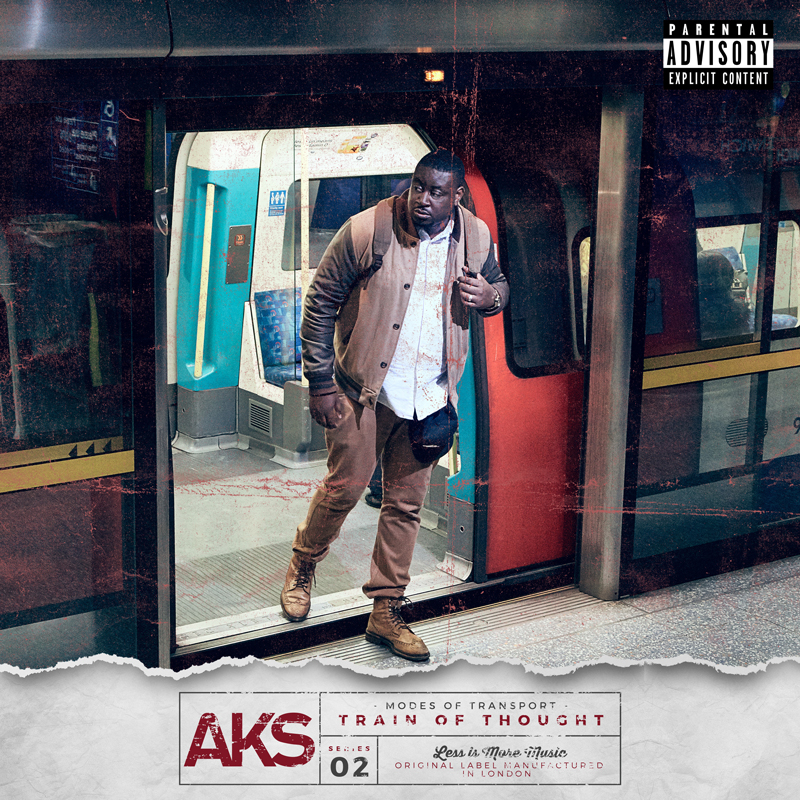 AKS bounces back with his new EP Train Of Thought, revealing a smooth and atmospheric British Hip Hop offering. As his first solo project in five years and a follow up to his debut EP The Bus Stop, released in 2011, Train Of Thought has been highly anticipated, with lead single “Stay With Me” being supported by the likes of BBC Extra and MTV Wrap UP. Train Of Thought is also the second release in his three part series ‘Mode Of Transport’.

The EP opens with title track “Train Of Thought“, an almost old-school hip hop track in which AKS is establishing himself as a part of the UK hip hop scene. With the lyrics, “My train of thought brother” resounding over a flavoured beat that echoes around your mind. However by the third track of the album, “Real Deal“, AKS delivers a more Jazz flavour, with delectable supporting vocals from Obenewa, and AKS rapping fluently over the instrumental about the reality of being an independent artist.

“Who Cares” then comes along, opening with train noises until a soulful rhythm oozes through speakers, with AKS repeating “I don’t really care too much what you say“, expressing his carefree style and exhibiting a smooth jazz overtone. The final track on the EP “Freedom Of Being Free“, which is produced by AKS himself, begins with him rapping rapidly accapella, until a Hip Hop beat enters, and AKS evokes a keen sense of sadness/regret.

Train Of Thought is a captivating project, that features random clips of train sounds and AKS talking to people. This adds to the whole travelling atmosphere, and the EP itself becomes more of a story once you listen to the tracks all together. Not only is the story about AKS travelling through different places as the EP goes on, but also the story of AKS himself. In his songs, he touches on many different topics such as his stance in the music industry and his struggles as an independent artist.

With smooth and soulful instrumentals throughout, AKS bounces back from his first EP The Bus Stop with even more jazzy tones and lyrics in which he truly expresses himself. He differs from his first release, by coming back with a more personal tone and deeper insights, as well as more catchy and infectious tunes that get stuck in your head like crazy, such as the single the EP is lead by “Stay With Me”.

Blending together a mixture of rap, soul and jazz, AKS has dropped an impeccable EP. The 8-track project also features collaborations with Tawiah and Wilson Sings, plus production from DemDrums and Kefas, who help to bring AKS’ EP to life. AKS shares his hopes and dreams with the listeners of this project, as well as his fears and struggles, and he expresses these, through his astounding lyrics.

“This project forms part of a conversation piece between myself as an artist, the listeners and the current musical landscape“, AKS recently told DJBooth about the project. He exhibits passion on his new EP; it’s almost as though he is having a real life conversation with you the listener, talking about his own personal struggles around different topics. AKS’ Train Of Thought EP is out now via Less Is More Music, purchase it on iTunes here.