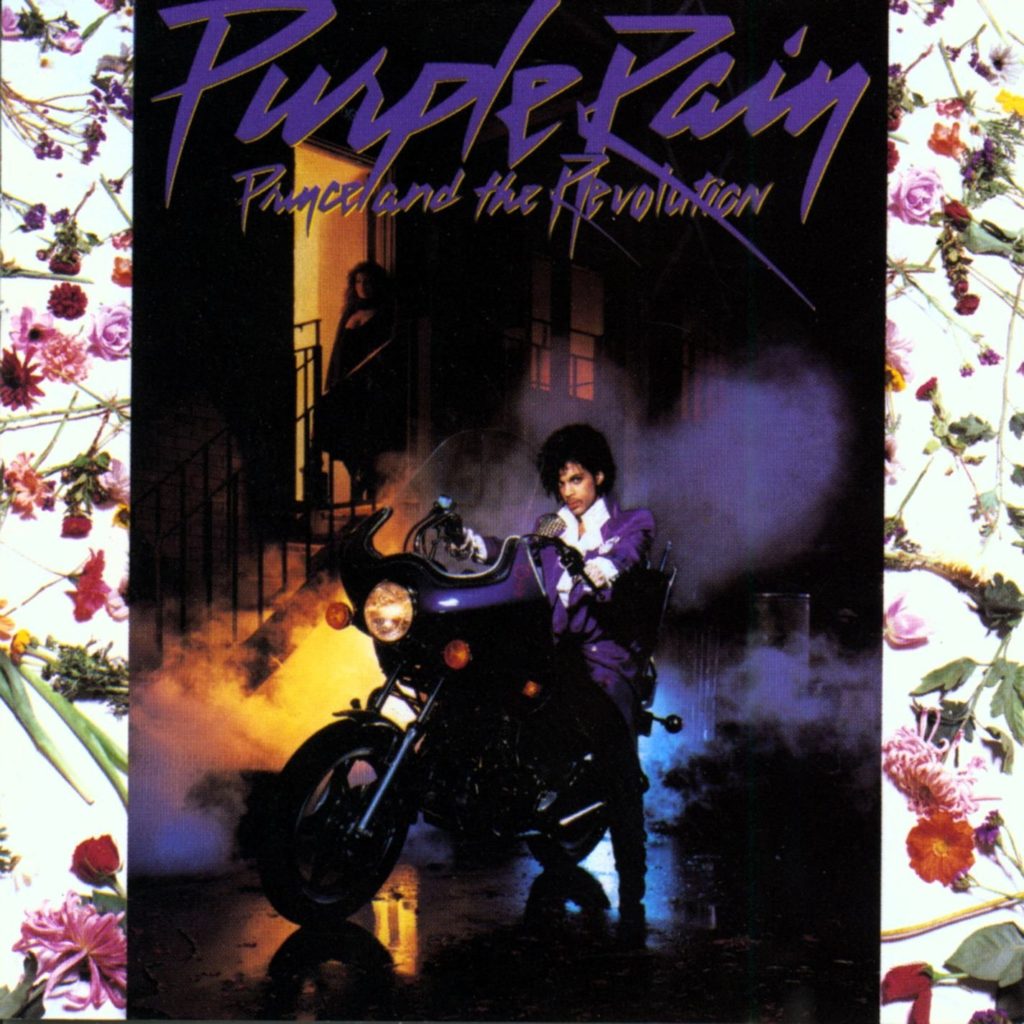 To celebrate the milestone, here’s a review of what is considered his foremost masterpiece. On Saturday, June 25, Purple Rain will celebrate its 32nd anniversary. Purple Rain was one among many excellent and commercially successful albums by the man. 1999, for example, was just one of them, and was one of the biggest selling albums in 1983, and so was 1991’s Diamonds And Pearls, to mention a couple.

Looking at Purple Rain’s album cover, it’s a curious sight to behold. Prince is looking uber rock and roll, sitting on that motorbike on a darkened street. Even the fact it was purple, and even the fact he was wearing what looked to be akin to Edwardian dress. Also purple. This is set amidst moody mist, a fog that could be attributed to burning rubber.

The whole picture, with, “Purple Rain, Prince and the Revolution” in suitably purple, bolt of lightning font, is framed with floral arrangements backed by a white background. The macho masculinity of the bike and, one could suppose, the badass Edwardian throwback fashion, is set, you could surmise, with that dainty femininity of the flowers either side. Also, why purple? Maybe, because, in spiritual circles, purple is a healing colour, as it to heal the rift between masculine and feminine.

The album’s key attributes are marrying all the influences to which Prince holds dear. He never, strictly, wanted to be a ‘black’ artist, and all that it entailed, worrying it would restrict his sound. It’s because of that, there are ‘rock’ moments, considered ‘white’, and other more soulful moments, considered ‘black’. These vastly differing genres, if you like, were put into a ‘popular’ package that could traipse those racial, musical lines. This was done so well, of course, that it sold as many copies as it did. It’s definitely what one could call a ‘crossover’.

“Let’s Go Crazy” opens with a sombre monologue. It’s got a touch of tongue in cheek, before the song kicks in, a fine slab of Eighties’ rock. It’s exciting, and the keyboards actually add to it, instead of subtracting. In other words it ages quite well, even to this day. Not dated, at all. Some of the riffs on it are super busy, showing off Prince’s rock sensibilities.

It really drives with some bite, leading up to the guitar solo. Here, he totally rips it up; really talented doing any genre he pleased. There’s a climatic finish, the cyclical riff heralding the end. This, the end, is also wild. He’d be right at home playing for Metallica, or something!

The subsequent track, “Take Me With U”, begins ominously. After that, though, it’s a driving, moody and minimalist effort. Prince’s vocal melody very much follows the general melody of the song itself, not unnecessarily complicating matters doing otherwise. In other words, it works. The track is certainly respite from the histrionics of the opener. Backing vocals, though, give a bit of diversity to the sound. The feminine touch, basically. There’s a reprise of the ominous beginning, before fading out to the song proper.

Electronic kit kicks off “The Beautiful Ones”, which tinkles with a sway and lilt. It’s a ballad quite indicative of the era. Having said that, it hasn’t dated particularly badly. The song gives the Purple One more space to express his identity, compared to the last one, in the vocal sense. This varies from spoken word declarations of love, and even some almost falsetto moments.

Again, from the previous track, the word for this one is that it’s a tad ominous. Perhaps a love gone bad, or something. There’s a closing section where he really belts it out, as if to prove his dedication and love for his woman. At the top of his lungs which goes from loud, not shouting, to loud and tearing his vocal chords.

Again, electric kit opens in the next track, but the rest pans out a tad different to the previous. “Computer Blue” is a slice of funky rock, with clapping drums to give it that massive sound. It has a wayward keyboard melody and occasional enough to get in your head.

Then there’s a crazy, again wayward, guitar melody, one that would please guitar virtuosos, even just as an exercise before playing proper. Speaking of leading into things official, the guitar melody gets a bit more thoughtful and melodic. The wah wah pedal is also in evidence on this one.

“Darling Nikki” is a pretty smutty ditty, talking about a nympho Prince claims to have met. It’s very stripped back for the quiet moments, with a touch of cacophony elsewhere. That’d be an understatement in places, with screams of, ahem, passion towards the song’s end. Keyboard and uber busy guitar herald nearing the end of the track. A strange harmony of voices ends it officially.

“When Doves Cry” is quite complex and layered, in a way. On the surface, though, many might perceive it as a straightforward Eighties pop song. The pre-chorus is addictive, using multiple vocals to give it an almost rousing quality. Those electric drums give that distinctive, massive sound. They really clap, punctuating all around them. The backing vocals hold it down, while the lead vocal is given room to wander.

A middle section of sorts comes in, the keyboards providing a chordal atmosphere for the lead guitar to riff over. This gets a tad wild and passionate, and, again, you hear Prince, if not screaming, then definitely on the verge of it. A keyboard melody, quite cyclical, helps end the track as Prince tells you, “don’t cry”.

“I Would Die 4 U” has a keyboard progression whereby the vocals can be built around it. It’s wistful and mourning, declaring, “I would die for you”. The bass locks in with the rhythm and vocal melody, packing a punch and reinforcing that melody upon which, seemingly, the whole song impinges upon.

This leads straight into, without pause, “Baby I’m A Star”. This one’s more upbeat, and really hammers with its groove. His vocals, passionate as ever, are the male contribution to sassy, irresistibly androgynous. The drums pound relentlessly, even the piano boogies. There seems to be a moments where the song stops for the Purple One to catch his breath. A short moment ensues and, before you know it, the song kicks back in.

“Purple Rain” is a beautiful piece of music. Those mournful guitar chords seem to convey multitudes of pain. Those massive drums, perpetual as ever, are slow but persist for the duration. “I only want to be some sort of friend”, is painful to hear, and to say Prince was wearing his heart upon his sleeve is an understatement. He spilt his guts out on this one. When he cries, literally, “I know, I know, I know”, you know the pain is real.

The guitar warms up for its first wail of true passion, the licks very rock and roll, yet soul. Rooted, essentially, in the blues. The guitar in this track is arguably one of its finest moments and, to prove it, that melody, the song’s biggest hook, knocks you for six. Prince uses that moment to sing in tandem with that lick, and with that ensured lighters, these days smart phones, would forever be raised at that moment, forever.

Purple Rain, therefore, only needed the legacy of that title track to keep Prince’s name from the ether. Thankfully, though, there are other moments that guarantee the journey to that closing moment is a pleasant and very satisfying one. That opening monologue on “Let’s Go Crazy” not only suitably opened some grand proceedings, the song proper, itself, was a good slice of groove and rocking out. Even the likes of “When Doves Cry”, though it’s far from this reviewer’s favourite Prince song, is excellent and serves as a good midpoint to proceedings.

“I Would Die 4 U”, and how it segues into “Baby I’m A Star” is proof that Prince was also a very progressive, forward thinking musician. Now, these two tracks don’t particularly set the heather alight, but on anybody else’s album would be considered very good, indeed. It’s how they come together, melding effortlessly, that grabs the ear.

Then, of course, there’s the title track closer. “Purple Rain” would raise any album to timeless status, but what assists the journey to that point makes the piece all the grander. Those closing moments on the guitar, lighters, smart phones, out swaying to the music, are near to perfect as humanly possible. In fact, Prince was superhuman.

Prince’s now arguably a world icon, these days, measured primarily on this album, but very much on many more of his efforts. You can purchase the definitely classic Purple Rain on iTunes here.