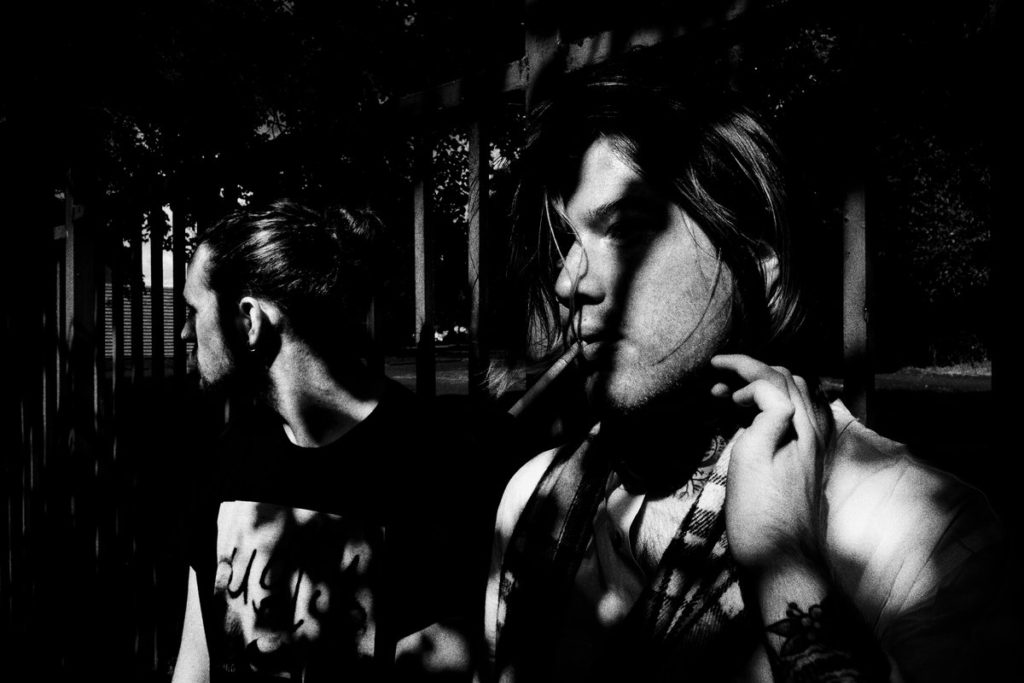 The Tunnels in Aberdeen, where young and new bands cut their teeth, played host to two up and coming bands recently. One was local, and the other, from Glasgow, really beginning to sizeably increase their national profile.

There was a smoke-like layer of dry ice hanging above the dancefloor in front of the stage, akin to the atmosphere floating above eggs in one of Ridley Scott’s Alien films. The fact that the gig was a 14+ show admission, probably added a fair few more among the crowd than usual.

First up, though, were local band, Wendell Borton. They consisted of vocalist/bassist, two guitarists and a drummer. Opening with a driving rocker, the vocals were imploring, energetic and rambunctious. It also had a grungy aspect, a touch of grit with wailing guitar lines. A curious breakdown seemed to get slower and doomier, really ringing in the ears.

The following was slightly more restrained, choppy and mischievous, but nowhere near as heavy as the previous. Like the first, however, the backing vocals combined with lead vocalist to maximum effect. Big sounding and bold, it was declared as, “that was the first song we ever wrote”.

Good dynamics featured next, with just the bass and drums. Rollicking and spunky, come to think of it. Nice, melodic guitar seemed to hint at living, and being, on edge. The song then returned to its introduction, with bass and drum. Good structure, before wailing out and crashing, finishing with, “we’re fine, same f*cking gig”.

Expansive, spaced out guitar greeted the subsequent song. It was a serious and earnest effort, the drums clamoured and picked up speed. However, this was a false dawn, still mellow. This came round, again, but did, indeed, pick up in volume. The guitar, pleasing as ever, was wild and expressive.

Announced as “Breathe” was what came next. This was high register guitar melodies, frenetic and frantic, and was boosted by the merit of a twin guitar setup. Really energetic , the drummer doing a power of work. Former daresay, vaguely, a sense of Thin Lizzy. “When you shut the door, I don’t mind at all” was a lyric that jumped out. Refreshing that a real attempt to sing was made, too.

“Crawl” followed. This was very brief, perhaps they moved onto the next song? “Sorry about this, this is so unprofessional”, they said, maybe tongue in cheek. Eventually, it came in, ringing with triumph as the drums indicated the ensuing majesty. Racing with enthusiasm. Guitars as tasteful as ever. A particular guitar lick was addictive, and with a real swing, too. Then came a curious announcement, with, “Lewis…he’s the youngest dad in Elgin”.

Twin guitar lead, more glorious than ever before in their set, came in. It veered between crashing and dramatic, subdued and telltale. Audience encouragement was given via, “Cove don’t know how to rock, Aberdeen do”.

“This song’s called ‘The Worst’”. The vocals and instrumentation syncopated, snappy and tuneful. This made one think of Blink-182, and their song, “Feeling This”. This crashed like the waves off Cove Bay, guitar melodious and thrilling. Seat of the pants stuff.

“This song’s called ‘Childhood’”. This one dragged, but not boring. More like dragging heels, defiant attitude. Maybe trying to convey, perhaps, displeasure or boredom in life itself. It became impassioned; rallying, even. It then stripped back for the vocals, muted guitar and light drums. The guitarist/vocalist then broke out to take lead vocal. The guitarist really having a Slash moment.  Safe to say because vocalist/bassist made the comparison, earlier.

Their final number came as they said, “This song’s called ‘Fault’”. This began with a wistful guitar line, before abruptly kicking into the song proper. Some in and out vocals ensued, their intermittence accentuating the words, giving them more attitude. The lead guitar was intense and, very much, sonically out there. The soundscape propelled the listener into some sort of weird, musically infused, parallel world.

Headlining were Glaswegians, WOMPS, made up of vocalist/bassist and guitarist/vocalist and drummer. “We’re WOMPS, thanks for coming out”. Rumbling, gritty bass opened the wandering “Plasticine”. This was with a touch of reggae guitar. Impassioned vocals implored the audience to acknowledge the band’s strife, maybe to see if what they think and feel was mutual.

Single “Manners” followed. Was this card in the pack to get the crowd going? Who cares. Its scratchy chords packed power, and real drive, as if to drive through the rain and snow with triumph as the destination. The descending guitar melody was noted, as pressures of life almost got the better of the band and, in turn, the crowd.

“If someone has a guitar, I don’t need it for this song, that’d be cool”. Crunchy and devastating bass rumbled through “Live A Little Less”, steady laying waste before accentuating the guitar melody. Otherwise, it rung in the ears, with the guitar intermittently shooting metaphorical sparks. Good dynamics as the vocals and guitar were given a moment, however brief, to recite hook before the band kicked in.

“Thanks to Richard [Wendell Borton’s Richard Stratton] for the guitar”. “Ritalin” was a driving rocker, which turned into something rather triumphant. Flourishes of it punctuated the pockets of rhythm.

“Who the fuck changes the ‘E’ on these things?” The bass rang with a clarity given from a chorus-sounding effect in “Cancer”. Everything came to a stop before beginning, again, in rip roaring fashion. The bass was constant, but wasn’t as in your face as before.

The whole backdrop was hopeful with a touch of melancholy. The bass did break out, with its rhythmic partner high octane and putting in one hell of a shift. Powerhouse performance. The general stop start theme displayed some excellent dynamics. “Dreams” was speedy and intense, deploring all the crap thrown at one in life. A blistering, chordal solo had a soundscape in its own right. There was a flourish of drums before the end.

Climbing bass and wayward guitar conveyed striving toward a goal, with all the potential pitfalls along the way, in “Another Cell”. The breakdown perhaps conveyed triumph, and the crashing moments of those final few steps toward said goal.

“How R.U.” was crazy, punky and a bit off the wall. It then became a tad subdued, before rushing back into mountainous tempos. The guys were feeling every note they played, as onstage you witnessed them getting suitably amped.

“This is our last song, thanks for watching us”. “Gift From God” was stomping and moody, the bass opening this one. Cock at dawn guitar, a rooster, if you like, proudly strutting with a reggae-esque simplicity. Immediate and vital, elaborate crashes of drum and guitars built into intricate rhythms that rised to crescendo. A phrase repeated from that night, as if to fly by the seat of one’s pants, comes to mind. The desperate vocals seemed to cling for dear life.

You can buy WOMPS’ album, June’s Our Fertile Forever, here.