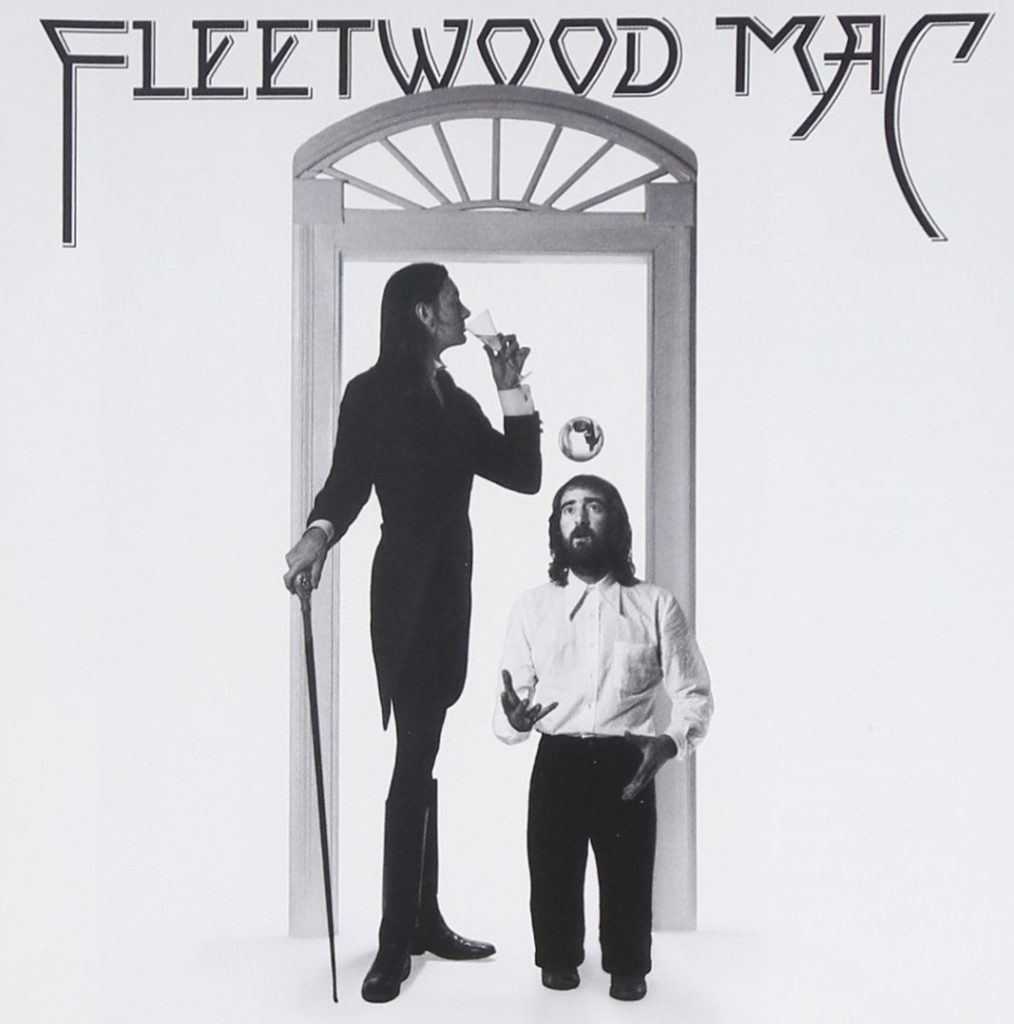 Fleetwood Mac released their eponymous album, Fleetwood Mac, in 1975, and on Monday, July 11, it reached its forty-first anniversary. They’d already recorded a self-titled effort back in 1968, their debut under the stewardship of Peter Green, but this was a beginning, of sorts, in its own right.

This was the first Fleetwood Mac album to feature Lindsey Buckingham as guitarist/vocalist and Stevie Nicks as vocalist, and although not as legendary as the new era and their 1977 effort instigated by the aforementioned duo, Rumours, Fleetwood Mac was the beginning of something special.

The album cover features the band name emblazoned across the very top, and below it, is an ornate doorway. Below that doorway is a rather tall Mick Fleetwood, the drummer, almost elegant in how sharp dressed he is, complete with a cane, or walking stick, conveying absolute, genteel authority.

On the other hand you’ve got John McVie, the bassist, the size of a dwarf, throwing a ball. Perhaps he’s even juggling this ball, a circus freak commanded by the ringmaster and his corporal punishment implement. Simply, Fleetwood, the tallest, and Mac, the shortest, combining, founder members, as Fleetwood Mac.

The opening track, “Monday Morning”, trudges, the bass ringing in tree trunk style. Then comes the stomping pre chorus and chorus itself. It’s all rather sparse, the drums the only constant. The solo is loud, gregarious and expressive. Lindsey Buckingham is definitely at the forefront of this one.

“Warm Ways” is, meanwhile, sparse in all departments. Mellow and beautiful. Christine McVie’s vocals seems literally married to John McVie’s enquiring, sliding bass. Nice touches on the drums from Mick Fleetwood, too. The chorus is impassioned yet delicate. Guitar melody is minimalistic but earnest, and straight from the heart.

Track three, “Blue Letter”, is a rollicking rocker by this era of Fleetwood Mac’s standards. Think the Eagles; that particular, seemingly, California sound. Guitar histrionics, aswell as the vocals, are provided by Buckingham. It seems to end before it begins, the shortest track on the album.  Not too premature, though.

Stevie Nicks finally makes her mark in “Rhiannon”. Deep, dark, mysterious and allegedly about a witch, there’s plenty to contemplate on this track. The descending, bobbing, weaving, ducking and diving of the bass complements the haunting guitar of Buckingham and the inner fury and passion of Nicks. Buckingham’s blues is evident on the guitar, as Nicks closes with, “dreams unwind, love’s a state of mind”.

“Over My Head” is Christine’s second, so far, time to shine. Set to a nice, easy beat that goes well with her vocals, her seemingly easy going attitude washes over the listener and, in turn, calms and soothes them. This is despite the lyrical content, talking of a “dark side”. On the other hand her claims of being over her head are also met with how “it sure feels nice”. A clever dichotomy, perhaps.

Next track, “Crystal”, seems like the devastation of Buckingham. Totally desolate and inconsolable. The organ seems to evoke a, sad, terrible loss. Like at a funeral, even. The drums punctuate perfectly, choosing their moments to crash, conveying the utmost drama. The vocal arrangement delivers a passionate declaration, the end of it all, as he goes out “to the sea”.

“Say You Love Me”, on the other hand, is joyful, with barroom piano evocative of bottoms up at a cosy, country pub. Christine, again, instigating something that maybe, on the surface of things, appears happy but concealing some sort of sadness or melancholy within her words. Take “if you use me again, it’ll be the end of me”, for instance. The irrepressible bass certainly locks in with both drums and vocals to convey this surface joy. The closing moments get busier in that respect, before the fadeout.

Nicks makes another powerful contribution in “Landslide”. Mournful and sedate, she’s accompanied by acoustic guitar. The overall, sometimes overwhelming melancholy is with a touch of hope. A guitar solo furthers that effect. The latter moments become steelier, “time makes you bolder, even children get older”, but it’s gone before you know it.

“World Turning” is a bluesy effort, with Christine bouncing off Buckingham, comparing notes in the histrionics department. When Fleetwood’s drums kick in, the track gets a tad busier, morphing more into rock than blues. There appears, then, to be additional percussion, really giving it a bigger, larger than life sound.

“Sugar Daddy” is a touch triumphant and, yes, there’s a touch of sadness. That hard to figure out the emotional centre, courtesy of Christine, comes, again. The organ and bass are the foundation as the guitar dares to get exploratory. “But when it comes to loving, he’d better leave me alone; ’cause I’ve got you baby, and you give me all the love I need” is packed with so much sass it’s irresistible.

Closer, “I’m So Afraid”, is epic, and sounds very unlike anything this guise of Fleetwood Mac has ever recorded. The closest coming, probably, from the Peter Green era. It has drama, triumph and the sense of the world closing in; the ground swallowing you whole. The key to the majesty in this track’s misery is that twin guitar melody, like Thin Lizzy playing at a wake for a dearly beloved friend, maybe even family. Like “Crystal”, in a way.  This reviewer ranks this song as perhaps the best effort on the entire album.

The album was definitely a turning point for the band, whether they anticipated the subsequent commercial success on the way is hard to say. The influence of Nicks in “Rhiannon” and “Landslide” bolstered the female influence within the band, whereas before this was just all via Christine McVie. You also can’t deny the both effeminate and ballsy contributions from Buckingham, especially in stonking classic, “I’m So Afraid”.

Combined with the input of the much more senior member, Christine, the almost swaggering attitude in the likes of “Sugar Daddy” proved there was still life in the other three, far from redundant. This is also furthered with the happy and sad conflicts she helped write, especially in the aforementioned, plus “Over My Head” and “Say You Love Me”.

There are a few instances whereby the tracks end a bit prematurely, fading out just as things are getting interesting. “Rhiannon”, come the “dreams unwind, love’s a state of mind” bit, is just about to become a rollicking piece of music for anyone familiar with its live incarnations.

Maybe, perhaps, this extended version was still in its infancy at the time of recording, which’s is understandable. However, it doesn’t make it any less frustrating to listen to when you know you’re missing what turns into fireworks. The relative brevity of “Landslide” could, also, maybe be argued upon similar terms.

Another example of this is “I’m So Afraid”. Apparently, this also morphed into a grand, live spectacle, appearing on all subsequent live albums after this album’s release. Fleetwood Mac: Live In Boston, had it at 9:39, making it the longest officially released version of a Fleetwood Mac song following the Peter Green era. This making it the fourth longest in their arsenal, overall, apparently. Yes, maybe how it came to be in the live context was, perhaps, faraway from complete fruition.

However, viewing things retrospectively is still prone to irk someone who knows how close a song sometimes comes to perfection in its extended form. Certainly, the album version feels a tad cut too short.  On the other hand, with the two shortest tracks on the entire album, “Monday Morning” and “Blue Letter”, that sense of unfulfillment isn’t quite there.

“Rhiannon” and “I’m So Afraid”, though, are amongst the strongest tracks on the entire album, even in their relatively embryonic form, and there’s still much to be satisfied about. Everyone has their say on this one, even Christine; and even the aforementioned founder members, background figures, have their moments, too. Both turning heads in “Warm Ways”, John’s bass married with wife Christine’s voice, underpinned by a beautifully restrained performance from Fleetwood. Those distinctive McVie bass runs in “Rhiannon” drive the whole song.

Then, in “Crystal”, Mick’s drums deliver the drama to make it compulsive listening, picking his moments selectively and not going hell for leather and quickly boring the listener. Then, of course, “Say You Love Me” arguably has, up there with “Rhiannon”, the best bass moments on the entire album. The former sees the bassist’s playing so bold, it simply can’t be contained.

With this album, Buckingham and Nicks’ writing partnership, and very fiery, passionate relationship, wasn’t quite as in overdrive as it would be in subsequent releases; perhaps making the album more of a band effort than would, arguably, ever materialise in future. Purchase Fleetwood Mac on iTunes here.