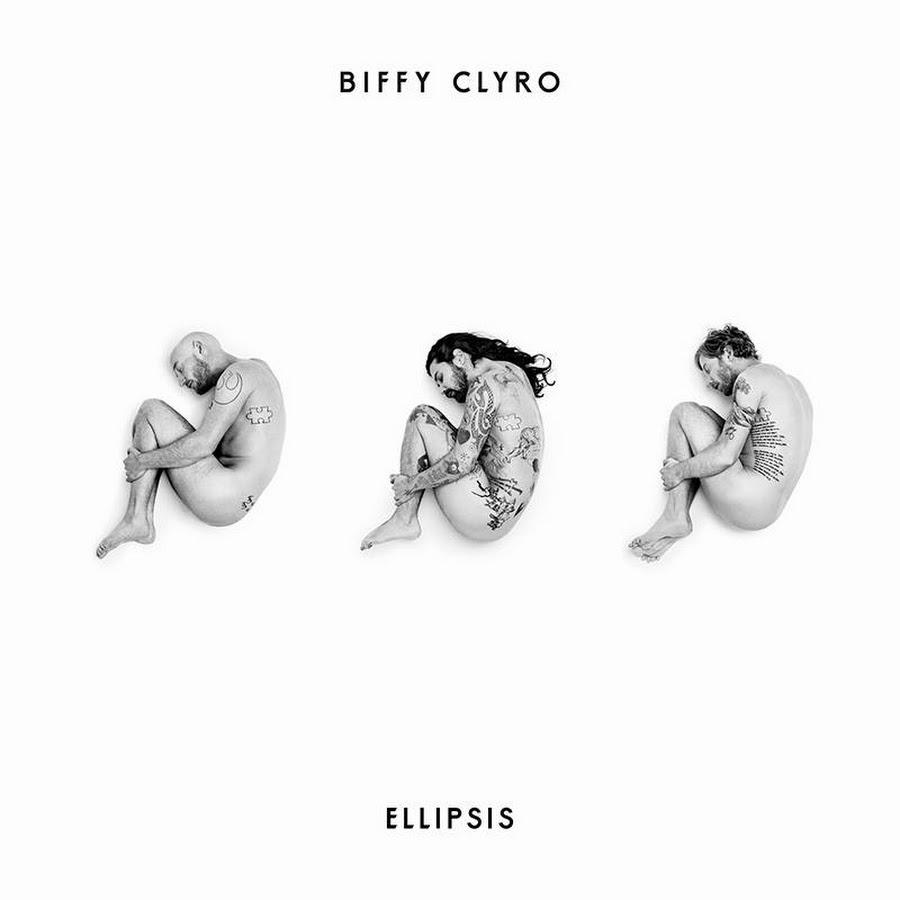 Biffy Clyro are a rock band from Kilmarnock, Scotland. With their first three albums they deployed a very dissonant sound in their works. Then came fourth album, Puzzle, and the nod towards more mainstream material began. They went one better in that regard with their next, and fifth, effort, Only Revolutions.

So much so, in fact, that X Factor 2010 winner, Matt Cardle, covered “Many Of Horror” from that very album. Following this was the rather bold, twenty track effort in 2013, going by the name of Opposites, originally intended to be two separate, ten track releases.

Come July this year, and the Scottish rockers are back with latest effort, Ellipsis. Apparently the period, of which this album is in question, was as such that the band were really seeking time out from the public eye, given the commercial success of their music and the tireless touring that accompanied it.

Anyway, the opening track, “Wolves Of Winter”, opens with howls of laughter and chugging, distorted and overdriven bass. The latter akin to the helicopter effect achieved by Pink Floyd’s Roger Waters. Then it really grooves, bluesy with pockets of vocal refrain akin to all the blues classics. It becomes quite choppy, with interesting vocal melodies over crushingly heavy guitar. The guitar solo doesn’t rewrite the history books, but has plenty of feel and emotion. Again, the blues.

“Friends And Enemies” opens with a clamour of drums and muted guitar accompanied by heartfelt vocals. The guitars build an atmosphere that’s a tad melancholy. Some of the vocals, as heartfelt as they are, seem like being on the verge of tears.

A middle section of sorts changes the tempo expertly, taking it to a place unsuspected. Like a choir of kids in “Give Peace A Chance”, by John Lennon, actually. Afterwards has some satisfying syncopated moments, crashing around in typical rock drama.

Track three, “Animal Style”, is a driving rocker and is very riff orientated. The drums really the bedrock of the whole thing. It’s generally a mix of heavy metal, alternative and indie sensibilities. Definitely a rock hybrid. Vocal arrangements are unabashed, like excitable chimps, aurally pleasing even when the guitar gets a tad wild.

Then comes “Re-Arrange”. This one’s grave and desperate, with earnest guitar and clapping hands; and also minimalist rattle of drum in the background. The vocals, almost in falsetto, are beautifully vulnerable.

“Herex” has sliding, again, distorted and overdriven bass. Ascending guitar chords lead into choppy seas, intermittent waves of drama punctuated with guitar meeting drum. Suddenly the sound becomes huge, before delving into a middle section with emphasis on the vocals, everything very sedate. A flurry of speed is quickly followed by a repetition of the opening moments, before fading out.

Next track, “Medicine”, is an acoustically driven number. Emotional crescendo is followed by yet more guitars joining in. This has a layered effect, quite busy for an acoustic track. Helping to build the drama, you could suppose. The stripped back nature, regardless of how many acoustics are playing at any given time, of the track lays bare a hint of that famous Scottish accent.

“Flammable”, suits the music that accompanies it. The guitar, like licks of fire, blazes with the ferocity of a house fire left until it’s too late; desolating and leaving only a shell. It’s definitely a moody one, heavy in how it trudges rather in how it kicks incessantly.

A statement of musical intent is made in the title of “On A Bang”. This is a busy one, suitably, the drums certainly a power of work, before the whole track slows down for a touch of doomy blues. The progressive nature of the track is displayed with several changes in tempo, excellent dynamics making for very interesting, exciting listening.

“Small Wishes” is yet more a sedate effort from the trio. Whimsical sounding, it aids what is perceptively a tongue in cheek effort. This being, as if to say, that you’re happy and content, but really you want to puncture someone’s tyres when they’re not looking.

“Howl” is a power chord strumming anthem, with, again, some dirty bass to give it that grit. It might remind one, to some extent, the sort of songs Feeder, think “Turn”, used to have on their albums. There’s also some satisfying “whoa oh oh oh oh” towards the end, giving the track some sense of triumph over adversity. A standout.

Climax, “People”, is another acoustically driven song. This perhaps the best, as there’s, in parts, a sense of graveness and finality; only to be pushed forward by pounding bass drum and a sense, around the corner, that things, indeed, can get better. The deception of fooling you into thinking all hope should be abandoned, when, actually, the reverse is true, takes you on a really satisfying journey, both emotionally and in the musical sense.

Looking over this, rather varied, effort, you have the perfect, grand opening of “Wolves Of Winter”, at least its opening salvos. When it gets choppy, it arguably loses some of its power and feeling that, indeed, you’re listening to something truly dramatic. The track is quite indicative of the line the band traipse between a progressive blending of many genres, and, arguably, the softening of their rock sound for a more mainstream appeal.

Then you’ve got tracks like “Medicine”, “Small Wishes” and “People”. Respectively, these are a quite sedate effort sandwiched between two, more or less, acoustic tracks. “Medicine”, the first of the album’s tracks to truly strip back things a peg or two, is interesting not only in that its sonic relief from a reasonably full on guitar album. Moreover, the instrumental layers, are curious and work rather well. Intriguing.

“Small Wishes”, the second of the, say, more sedate numbers is refreshing with its seeming humour, comic relief from a reasonably rather serious album. “People”, on the other hand, the third sedate and second acoustically based track, is only a whisker from being the standout track. The aforementioned musical and emotional deception, thinking you’re being whisked away on a glorious journey of self-pity and tragedy, when actually you’re delivered upon a tour de triumph.

Sandwiched, again, the key word, between the latter and “Small Wishes” is “Howl”. This only, just, beats “People” as the standout. That dirty, distorted and overdriven bass underpins the whole devil may care, hero saving the day at the very last millisecond feel. Find this reviewer an instance when “whoa oh oh oh oh” isn’t capable of saving a bleak soundscape from its own minor chord claws, and that is a hefty challenge.

In a weird way, unlike the opening “Wolves Of Winter”, the album closes in a way you either hope or anticipate, whereas the former appears to go in directions and tangents you perhaps don’t sense because of how, in a way, progressive it is. Finally, you’re granted that epic feeling, however slightly predictable waiting for it to happen was.

None of the rest were particularly predictable, as such. Not by a longshot. Perhaps with the remaining tracks, they were victims of their own progressive sensibilities. Or, if you look at it more cynically, as said, the softening of their rock sound for a more mainstream appeal.

The melding, it seems, of so many other genres to create hybrid songs perhaps, though maybe increasing the excitement via unpredictability, actually creates a sense of flat song writing, that never ‘gets anywhere’ the listener hopes for. “Animal Style” being an example, in a way, of a hybrid born of many genres.

You could argue this effort’s a mix of their formative years of exploration, put together, sometimes uneasily, with an ear for the mass market. Very contradictory, sometimes, trying to get your head round these debates of progressive music lending to more unpredictable, therefore satisfying music. Purchase Ellipsis on iTunes here.