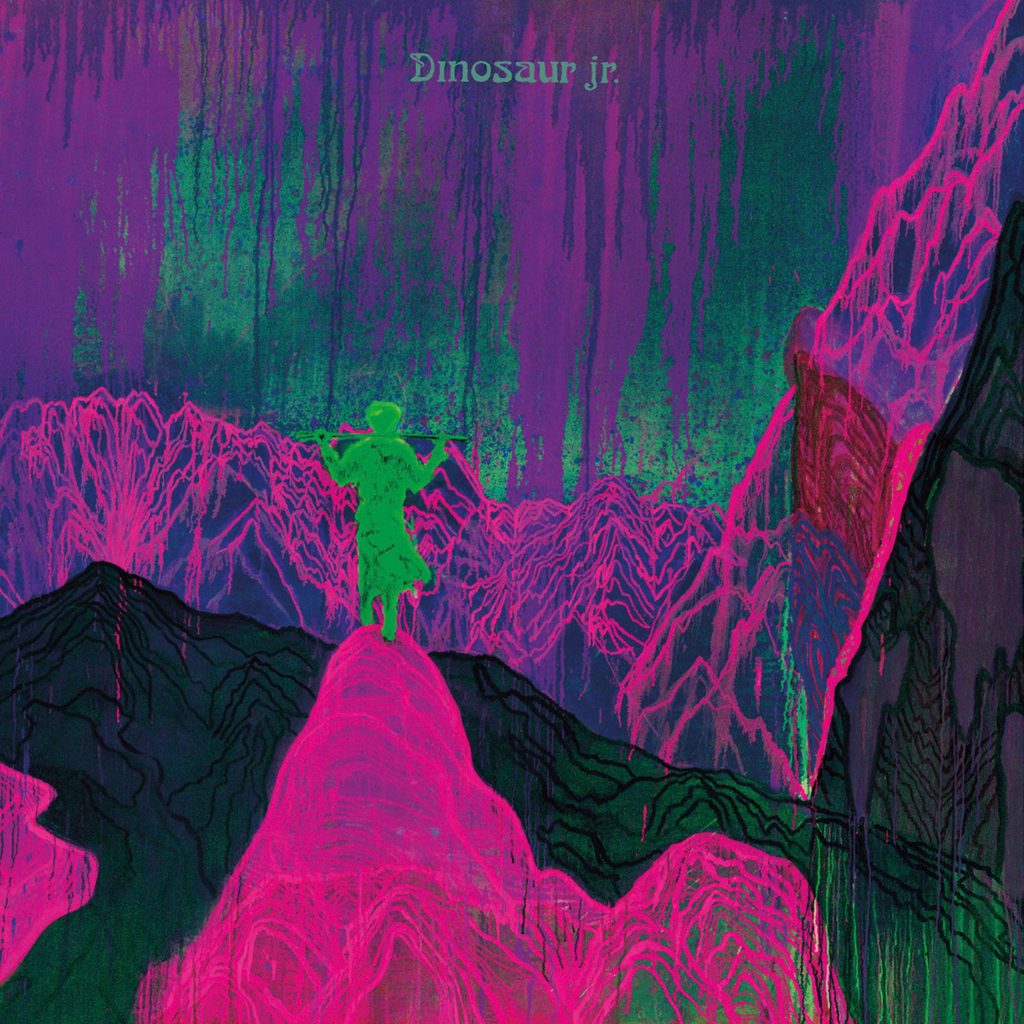 Dinosaur Jr. are an American band from Amherst, Massachusetts that first came on the scene in the early to mid-Eighties. It’s said they were originally called Dinosaur, but legal issues necessitated a name change.

The band was founded by, and has largely comprised of, primary songwriter J Mascis, on guitar and vocals; Lou Barlow, on bass and vocals; and Murph, on drum duties. After fragmenting, Barlow later forming bands Sebadoh and Folk Implosion, the band went on an indefinite hiatus in 1997.

The original lineup reformed in 2005, releasing Beyond (2007), Farm (2009) and I Bet On Sky (2012). This relative stability now sees yet another album in the more modern era, Give A Glimpse Of What Yer Not, released Friday, August 5. Their mixture of drawling vocals and guitar reminiscent of the best in classic rock riffs, combined with heavy use of feedback and distortion, are said to have helped spurned on Nineties alternative rock.

The opener, “Goin Down”, opens fuzzy and distorted, yet triumphant. The vocals, meanwhile, are soft, set against a wave of hard instrumentation. It definitely chugs along, with much energy and determination. A slab of classic rock, if it weren’t for those grungy sensibilities giving it extra bite.

The middle section briefly takes you away from all familiar, before continuing on relentlessly. A solo roars, quite tasteful considering the anti-wankery stand taken by many bands of a similar ilk. Refreshing. The closing moments are also rather tuneful and fresh.

“Tiny” has a certain punk swagger to it, choppy chords urging immediacy. The vocals are a tad despondent, but also seem to conceal a wink and a smile. Like as if to have melancholy in your heart, but also that it reinvigorates you, like fans of The Cure, or something. Things get a bit more classic rock and heroic on the guitar, before quite a blistering solo. It closes that good, too.

The song, “Be A Part”, is arguably the first song with a hint of blues and real sadness. It begins sedate, but excellent dynamics see the song gradually gather in tempo. Arpeggios ring out and reverberate in your head and mind, slow and ponderous as the drums knock out rhythms anticipating a real build up; faster but still dwelling in the twisted flights of fancy. The solo, tasteful as ever, lends a certain emotional layer to the song, highly strung and laying waste to all that’s happy in life. If they can’t have happiness, then so can’t you, kind of thing.

Picking up the tempo a little bit is “I Told Everyone”. It’s still a bit sad but the rhythms dictate getting better in the mental aspect. The chord changes really pack power, low and guttural; the bass biting, too, with overdriven punches. Come, roughly, the midpoint, the guitar suitably lets rip with a wailing and passionate solo. Things slow right down in the closing moments, chords punching out intermittently before ending.

“Love Is…” opens with some dirty bass, arguably at odds with the almost folky acoustic energy of the track. The only hint of not being at odds with it is that electric guitar in the backdrop. The bass seems to clean up, making its fanciful fills far more satisfying and boosting the overall intention of the song. The guitar’s moments, however, are really biting with some real attitude. The vocals might remind one of the late Kurt Cobain during Nirvana’s more mellow moments. It rings out, almost vibrating.

Following that is “Good To Know”, which has a real flourish of guitar, the track immediate and busy. A punk energy with the eloquence of conveying emotions other than nihilism. The drums are relentless, pounding and herald a beautiful solo, one urgent and wild. The intensity builds, really high octane and with plenty of passion. The lead guitar playing in this one’s particularly exemplary.

What seems aptly named is “I Walk For Miles”, which’s alternative, grungy and despairing. Things pick up a bit, but only to convey how fed up and infuriated they are. Things almost sound like as if the levels in this song, if played live, would do some serious ear damage.

Its turned and toned down, studio version only showing mercy by chance of its recording engineer. There’s a certain determination to the song, noting the song title for instance, that’s also conveyed in a sort of trudging rhythm. This, in turn, conveys walking, as they say, endlessly for the benefit or love of someone else. Yet another solo rips through this one.

The indie vibes of “Lost All Day” convey the humdrum life and the sadness that boredom or circumstance may end you. Like not being content, and the subsequent pickup in tempo conveying frustration, a certain manic and frantic anger. The muted, chugging guitar like someone building up inside, maddening themselves with the annoyance at things that don’t bother other people half as much. The straw that broke the camel’s back, kind of thing. The guitar in this one’s quite heroic, but not as flashy as before; this time totally melodic.

“Knocked Around”, judging by the title, starts suitably on the drums. Despite the nature of the title, it remains quite mellow and melancholy. The vocals are almost falsetto, conveying hurt in the heart and that a certain longing for someone who means a great deal to oneself.

Easily the cleanest song, sonically, on the album, as the soundscape airs the dirty washing of the lovelorn. By midway, however, you’re definitely caught off guard, as the song suddenly gallops to, what could be perceived as, the ecstasy of meeting loved ones and resolving issues.

The rather curious “Mirror” starts as the aforementioned starts, but heralds moody guitar instead of evoking more acoustic vibes. It certainly doesn’t gallop, but swings and subsequently gets real groovy. Wailing, dirty and wild guitar plays over these sparse rhythms, plenty space to fill out that sound.

Now for closer, “Left/Right”, which has a certain spasmodic indie riff thing going on. Guitars then well up, maybe like the tears of the frustrated, lifting the emotional eloquence of the piece. Acoustic guitar and pondering, almost tribal, drums take the song elsewhere before resuming where they left off. The vocals implore, perhaps judging from the song title, the need or desire to be understood.

For an album that’s hardly been recorded at the nexus of their career, Dinosaur Jr. have really pulled out all the stops with this album. Usually you expect albums of this nature to fizzle out after, maybe, three tracks, and bore your pants off for the rest. This, though, has three excellent tracks, the remaining numbers very good, exciting and engaging. For example, there’s not one dud guitar solo outwith these three, lifting very good songs to heights they almost reach of their own volition.

Anyway, the three specifically in question are “I Walk For Miles”, “Lost All Day” and “Knocked Around”. These really convey, on a whole different level, mood and, via progressive song writing, changes of mood. A journey of the emotions.

The rhythms in “I Walk For Miles”, for instance, are trudging. You can almost picture someone walking in that very motion; whether knee deep in the sand of the most energy sapping deserts, or the coldest of desperate winter treks. You’re ultimately doing that distance, set to drop, for the love of your life, the song title explaining all.

This is furthered in “Lost All Day”, and its subsequent pickup in tempo almost like going from trudging to running, whether that be physically or having racing thoughts. Working yourself into a frenzy, exhausting yourself in numerous possible ways; that straw that breaks the camel’s back.

“Knocked Around” then repeats the rough arc conveyed in the aforementioned duo of songs, almost exaggerating the process in manic time. So much so, this is done, that it takes you by surprise. First you’re wondering why such an aggressive song title is greeted, yes, with drums; but drums that are so calm and unassuming.

The cleanest song on the album, as said, airing the dirtiest of thought alleyways. This then gallops to ecstasy, totally taking you by surprise. Maybe resolution via post argument, passionate lovemaking? Those three, looking back, trudge; trudge then run; trudge then mount onto horseback.  Soundscapes taking you on a journey in your mind, to different places or different feelings.

Dinosaur Jr. have got something quite clever going on here. Not only that, unlike most bands under the alternative rock genre, one they arguably formulated almost singlehandedly, they aren’t ones to eschew a well thought out and melodic guitar solo. This also applies to the crafting of their songs in general, too. Dinosaur Jr.’s Give A Glimpse Of What Yer Not can be purchased from iTunes here.