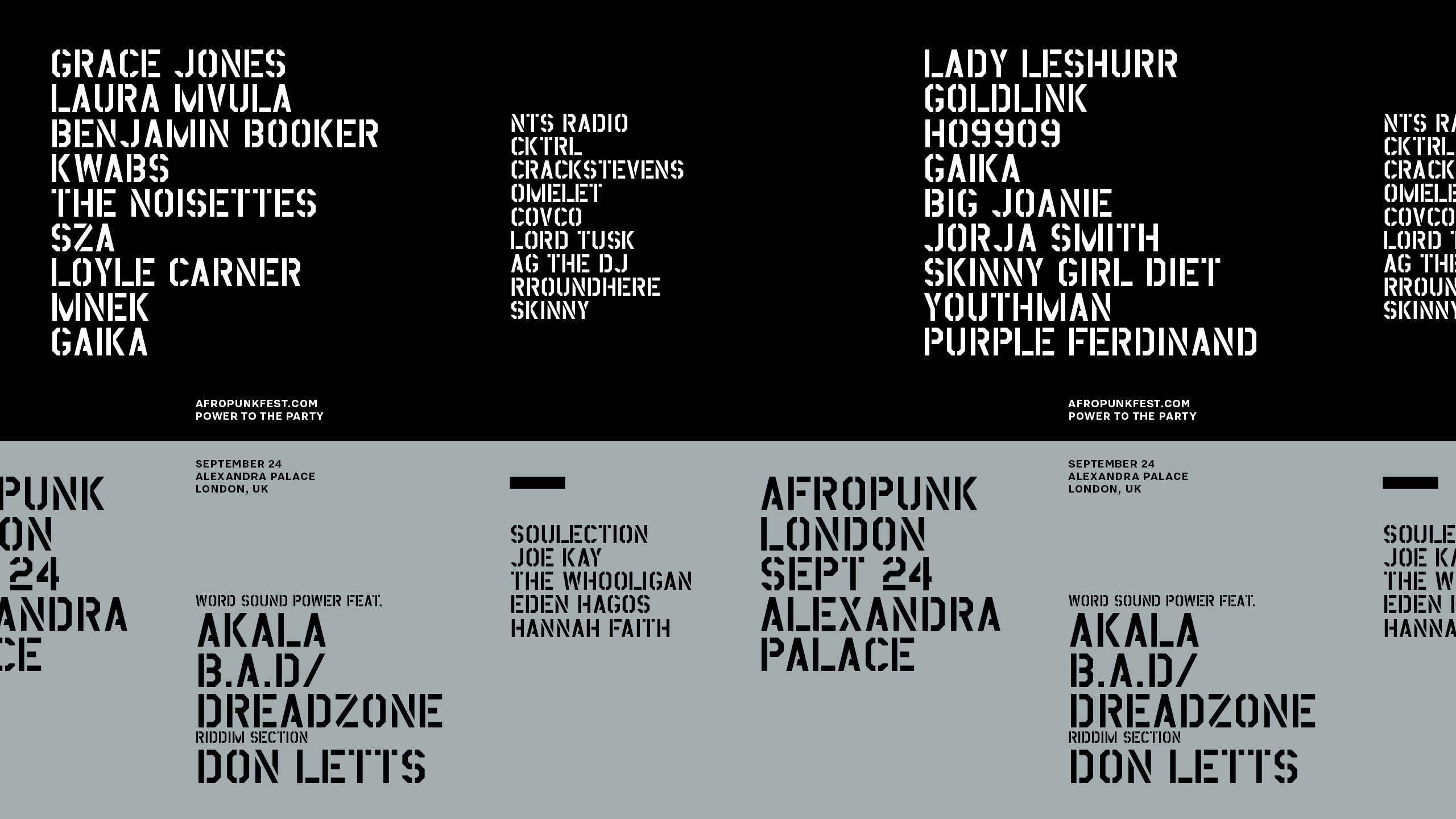 AFROPUNK brings its live music festival series to London this year! AFROPUNK London takes place at Alexandra Palace on Saturday, September 24. AFROPUNK, originating in Brooklyn, now offers dates in Paris and, of course, London. It can be said that not only will there be a wide selection of artists to catch, but that the audience themselves will be composed of a wide variety of people, all with differing tastes in music.

Take Grace Jones, for instance, who will be headlining AFROPUNK London 2016. Born in Jamaica and relocating to New York with her family, Grace Jones began as a model, a very successful one, and in 1977, she then secured her first record deal, securing hits like “I Need A Man”.

With an era coming to a close, she recorded the much lauded albums Warm Leatherette (1980) and Nightclubbing (1981). She also changed her fashion sense, adopting a style seemingly in tandem with her fiery, ferocious nature. Part Zulu, part Pict, she could come across quite intimidating, sporting a now iconic look of a high-top fade to the extreme with plenty of blush on the cheeks to achieve an almost gaunt look. Certainly, she seemed to still maintain an eye for fashion even when, now, predominantly known for her music.

The Eighties were quite eventful, too, working with the likes of Trevor Horn and Nile Rogers, still very much at the top of the musical tree, true and current as ever. Never mind starring in films with the likes of Arnold Schwarzenegger and Roger Moore, among plenty of others and television work. Even to this day, she remains current, an all round topical lady.

The festival also boasts Laura Mvula, another strong woman, who’s become one of the UK’s finest exports. Since coming on the scene in 2013, she’s earned a Mercury Prize nomination, among many other plaudits. Although resurrecting the importance of soul very much being her mission statement, she remains as current as ever.

In June, for instance, she released the sequel to debut album Sing To The Moon, titled The Dreaming Room. This an effort that, to the untrained ear, sounded like pop; but indeed acting like an earworm to the masses, one which subtly weaves soul into their musical mind state. In short, the album, and most of her efforts are hard to categorise, a smorgasbord of influences seeping, emanating from her very soul.

Number, if you like, three on the roster are legendary film director, DJ and musician, Don Letts; rapper, poet and academic, Akala; and dub, reggae, electronic dance, folk and rock band, Dreadzone. Expect a melding of various influences, both Afro Caribbean and British, and everything in between.

Even, staying true to the name of the festival, “the classic punk era” will be delved into, too. Described as a “soundclash”, this stage is bound to be a packed one, more so with “very special guests” still to be confirmed. Basically a celebration of forty years of black British music.

Working down the roster, down not necessarily the operative word, you come upon Birmingham rapper, Lady Leshurr. Her dignified name isn’t too far from the truth, garnering the prestige of landed gentry, with over fifty million views on YouTube. She’s sold out shows from New York to Brixton, and is on the radar of big hitters like Timbaland, Erykah Badu and Busta Rhymes.

Debut album on the way, Queen’s Speech EP released in January, there’s certainly plenty to see, or hear, that proves her star to be in the ascendency and burning bright. She develops the previous theme in this piece of proud, strong women, driven very much by her own self-determination.

Last, but not least of the acts to look out for, come The Connectors, consisting two musicians, Andy and Danny, loud and exciting. Again, the title of the festival is invoked, and, strictly speaking, perhaps not just the punk part. Punk, rock and anything else of explosive energy all factor in.

It isn’t all purely music related, though. The SpinThrift Market will showcase and celebrate all for the DIY-minded, punk rocker and otherwise, with bespoke items inspired by art and textiles. Jewellery, natural beauty products, apparel, housewares, books, prints, and more will all be on sale.

The Bites & Beats food experience will be an event within the event itself. What’s more, festival goers will be able to view and interact with original artworks. An immersive experience, indeed.

Outside the immediate festival area, after all the acts have played, AFROPUNK London will take the festival into the streets, bars, and restaurants of the capital for AFROPUNK AFTER DARK. This could be a comedy show or dancing to a celebrity DJ set. There will be pop-up performances, film screenings, art installations, drink specials and more soon to confirmed as the event draws closer.

Also, for the willing, is the AFROPUNK (AP) ARMY. This is described as “the volunteer corps of AFROPUNK”. This promotes festival-goers to volunteer their time to help “organizations, social justice movements, and their local communities”.

Volunteers who complete all program requirements will earn two general admission tickets to the event. They will need to “accumulate and successfully complete a MINIMUM OF 8 HOURS of volunteer work (unless otherwise noted) before unlocking their ticket to AFROPUNK LONDON 2016”.

Find out more about the volunteer scheme and opt in for it here.