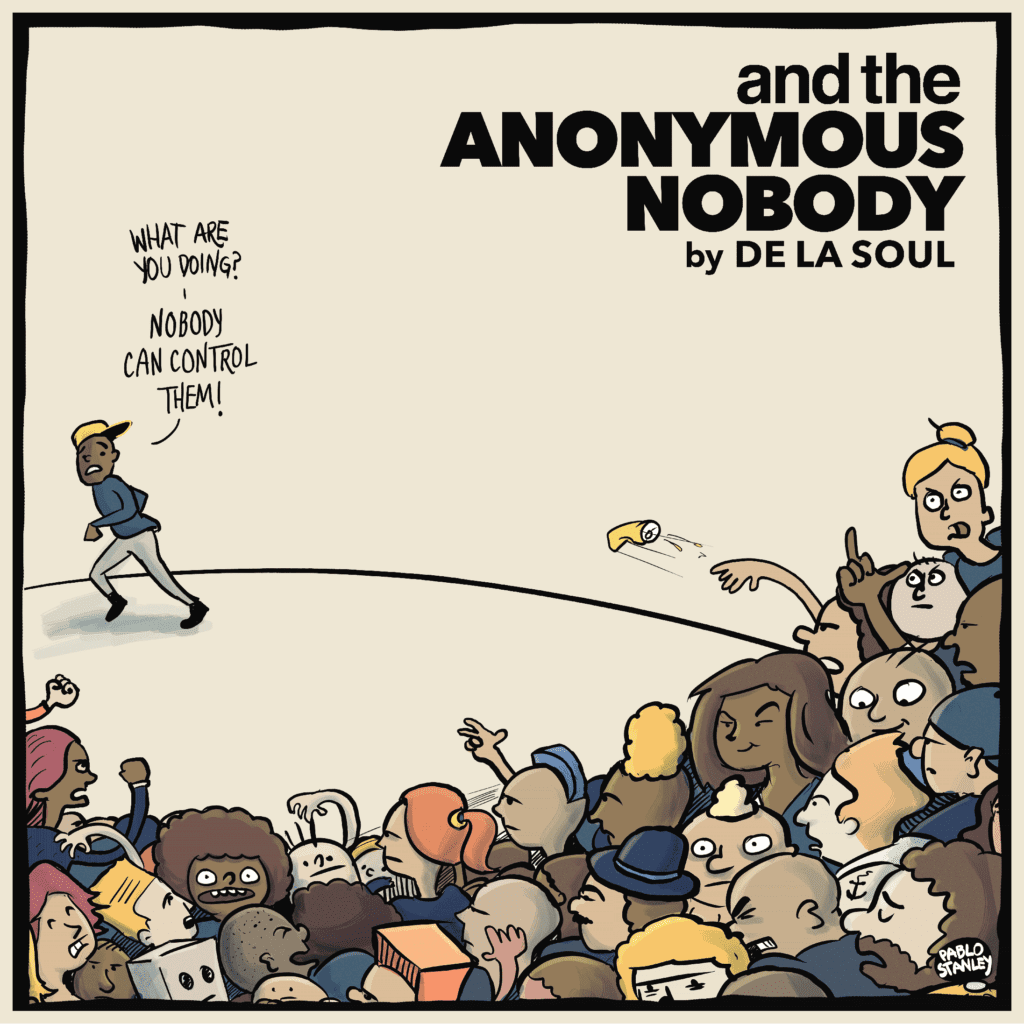 De La Soul are an American hip-hop trio from Long Island, New York, who are basically amongst the pioneers of the genre since their 1989 debut, 3 Feet High And Rising. Their sophomore album, 1991’s De La Soul Is Dead, was, in turn, one of the first to receive a five-mike rating in the rap magazine, The Source.

In 1993, their third offering, Buhloone Mindstate, was a phonetic spelling of “balloon”. It contained the repetition of “it might blow up, but it won’t go pop”, a mission statement of the group to expand their fanbase without selling out. This very much continued with 1996 and Stakes Is High, with gangsta rap not quite yet toppled and the group very cynical, by this point, about the industry.

Fast forward a fair few years and, the sad thing about it all, is that this latest effort gained its footing with the necessity of a Kickstarter campaign. The good thing, however, is that in under ten hours, it surpassed its projected $110,000 goal. Anyway, after a bumpy start, we’ve now got And The Anonymous Nobody… which dropped Friday, August 26.

The opener, “Genesis”, featuring Jill Scott, opens with grand strings and a prologue courtesy of an empowered woman revealing some of the home truths in life. Her passion certainly builds up towards its end, instrumentation sounding grave.

“Royalty Capes” begins yet grander, another woman opening proceedings a tad sassier. The hit of the drum is hard, like live instrumentation. The flows are in the pocket, years of mastering the craft making it sound easy. The minimalist bass locks, like subtle jazz. Verses appear to be interspersed with proclamations from said sassy woman.

“Pain”, featuring Snoop Dogg, is a tad funky, suiting the West Coast cameo. Understated funk, though, like the funk you’d normally here from the progenitors of classic, New York hip-hop. Snoop really dances across the track with expert grace, almost upping his game as if to prove his ilk are capable of shooting from the hip when lacing tight, purist rhymes. The hook, sung by a chorus of well voiced women, is soulful and gives the track real depth.

The third, “Property Of Spitkicker.com”, featuring Roc Marciano, has a cyclical, muted guitar like you’d hear on a Pink Floyd song. Like the chugging of helicopter blades whirling. As the soundscape calms slightly, the rapped verse sounds overlayed with a robotic-esque effect. Roc heralds the stop of this. Only temporarily, though. Like being assimilated by a robotic race. Then his true voice comes back. It seems all rapping on this track are battling some kind of force to stay human, or real, as they say.

Then comes “Memory Of…(US)”, featuring Estelle and Pete Rock. This has strings touched with melancholy, though indicating some divine suffering to make it through to the other side. Backing vocals create an ethereal soundscape, and Estelle sings as if to say not to worry, the bad times are almost over and joy is just around the corner. The raps seem to concern making all the provisions possible to treat your other half like royalty, showering them in the glory you deem they deserve.

“CBGBS” really hammers in, a live band setup building to a crescendo, heralding the rapped verses. The crawling, cyclical riff, an earworm in itself, is apparent, but ends before you know it.

Justin Hawkins features in “Lord Intended”. This has loud guitar, but in more of a rocking out vein. Heavier, certainly. The guitars ring out, lending a certain moodiness to proceedings. The hybrid is lent a further, reasonably successful, clash of cultures with a tad of scratching, too. The aforementioned man of The Darkness fame comes in, vocally speaking, midway, lending a certain Queen quality to the track. Grand, glorious and a touch groovy.

At almost the half point mark is “Snoopies”, featuring David Byrne, which’s almost industrial in its composition. Like the mechanical equivalent of water dripping from a tap. The backdrop seems to turn on a sixpence, like the chopped up soundtrack to Christmas and the festive period. The closing moments get yet stranger, a certain weird majesty before Christmas resumes and a car screeches to a halt.

“Greyhounds”, featuring Usher, has industrial drum, a sad tinkle creating mournful melody. Driving bass then comes in, satisfying in how it conveys, emphasises, sadness. Usher certainly, with that soul from the heart, brings that melancholy home. This tragedy’s dynamics are expertly utilised as slowly, one by one, each component of the track drops out to a ringing fadeout.

The addictive, infectious bass of “Sexy B*tch” locks in with clapping drum that definitely sounds live, though the track dies a quick death at about the minute and a half mark.

The oldschool hip-hop percussion of “Trainwreck” is aided by an evasive bassline. The latter like game evading capture, prey proving to be the hunted toying with the hunter. The lyrics seems to concern disastrous relationships, “even though she’s a bomb scare/I’m standing right here” being a line best illustrating this.

“Drawn” has, featuring Little Dragon, a dreamy soundscape, featuring deep, upright double bass. The vocals of Dragon are light, soaring in their delicate nature. Almost mischievous in their sound are the melodies that play in tandem with the vocals of the aforementioned. The track develops as the bass is given free rein to breakout and express itself. The curtains were drawn, but no longer.

The magic of “Whoodeeni”, featuring 2 Chainz, has an immediacy to it, perhaps haunted or creepy. Electronic voices, not a tad human sounding, herald the guest rapper and his contribution. This voice is reprised for the remaining verses.

Mischievous “Nosed Up” and its tempo necessitates flows rooted in the rhythm’s pocket, and that they certainly do. It ends with peculiar, surprisingly tuneful harmonies, like outside a barber shop or in front of a roaring fire inside a metal barrel. “You Go Dave (A Goldblatt Presentation)”, is a silly skit concerning record collectors, with a dig aimed at, it seems, fans of Silentó.

Big Brit cameo number two, the intense “Here In After”, features Blur frontman, Damon Albarn. He, of course, worked with the trio for his Gorillaz project. The drums are high octane, rooted in plenty of hi-hat and relentless play. This slows right down, however, almost reggae is the execution of the change. The bass seems to reach the height of joy, very eloquent is its search for those higher feelings. Additional percussion tinkles and washes over the listener, who might not be too far from a dream state.

Closer, “Exodus (Outro)”, has deep, mournful bass and guitar. An intensity appears to build and build, only to dissipate continually.

Particular highlights on this album are the likes of “Greyhounds” and “Here In After”. The former simply because of how it’s a track not specifically in the traditional rap format, and how it just works; the latter for similar reasons, plus the fact that there are expert tempo and, seemingly, genre changes, yet still the trio barely blink an eye during delivery.

Moreover, there are certain themes repeated through the course of the album, and how they crop up seems quite clever. Take “Property Of Spitkicker.com”, for example. It’s got an overlayed effect whereby the verses sound occasionally robotic, very futuristic. This continues, fast forward, to “Whoodeeni” where these voices reappear, but sounding more wholly robotic and, daresay, the modern world assimilating people into the bowels of technology.

Similar repetition is seen in “Snoopies”, where it connects with subsequent track, the aforementioned “Greyhounds”, in the way hard, industrial sounds establish themselves in one, and continue to the next. Again, perhaps very man versus clanking machine stuff. Another example of this is the mischievous melody of “Drawn”, which skips a track before re-emerging in “Nosed Up”.

There’s still yet satisfaction to be gleaned from this effort, with very solid contributions in “Royalty Capes”, “Pain”, “Memory Of…US”, “Lord Intended” and “Sexy B*tch”. In other words, there’s little on this album to split hairs about, and that which you can is sometimes just a skit. Even they, though, have their comic or cinematic value.

De La Soul have definitely come with an effort to be proud of, especially considering the album’s dire origins and how it was only a pipedream until their fans willed it into existence. For such a lengthy effort, it’s definitely a strong one.

Certainly, some of it deviates from the usual format deployed within the genre, with some of its finest moments proving why they’re so widely regarded as pioneers. Virtuosos, maybe? Their scope of guests is a wide one, too, spanning various genres and lending its worldly sound.

De La Soul’s And The Anonymous Nobody… can be bought from iTunes here.