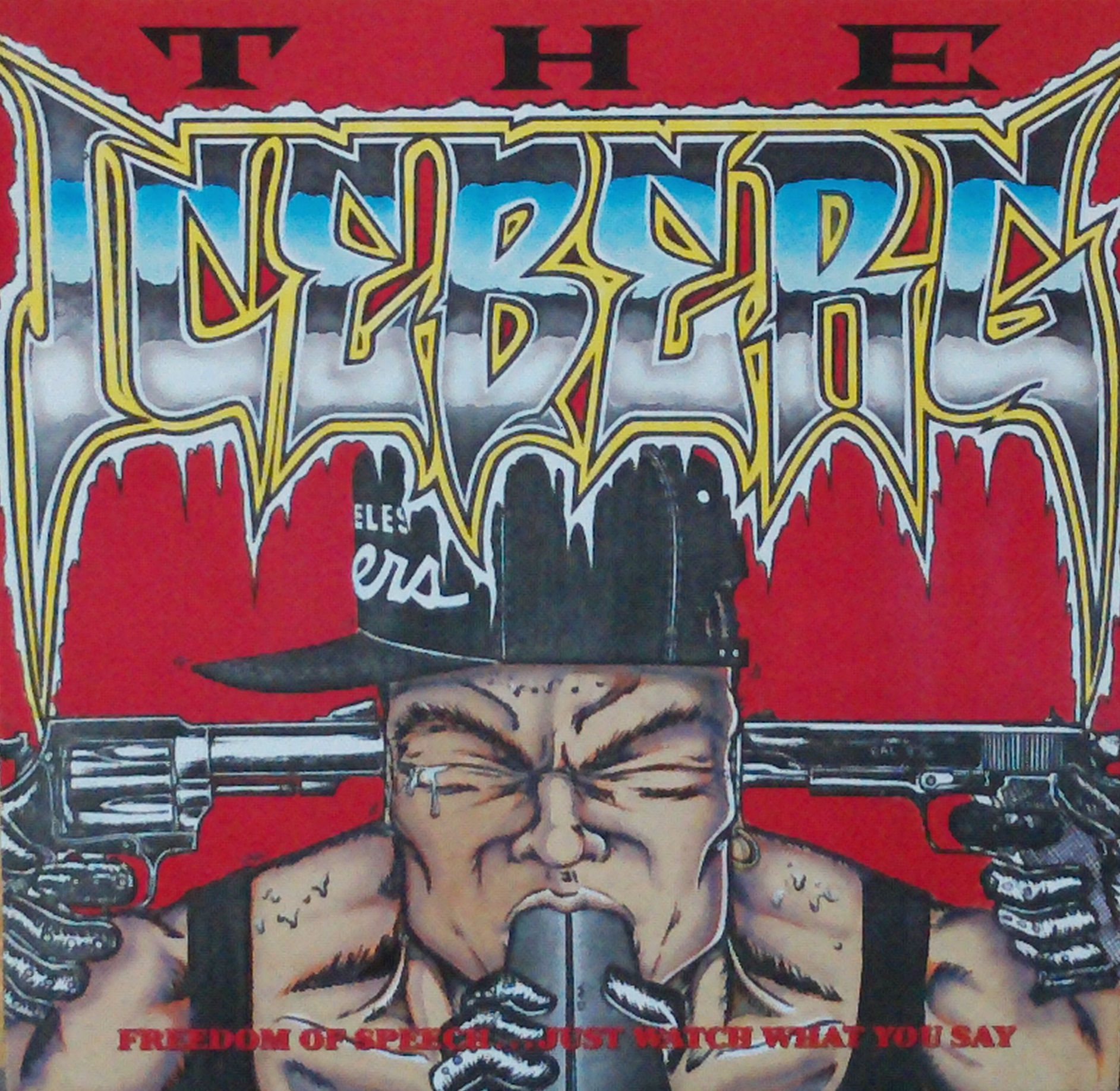 Ice-T, of course, has explored, stretched, the concept of freedom of speech throughout his career. Especially in the song, “Cop Killer”, with his rock band, Body Count, which was withdrawn from subsequent copies of their self-titled debut in 1992.

His album, The Iceberg/Freedom Of Speech…Just Watch What You Say!, is 27 years old as of Monday, October 10, and, preceding that song by a few years, was the genesis of a harder edged style for the rapper. This coming from a rapper whom, two albums previous, Rhyme Pays, had already birthed, arguably, gangsta rap with breakout track, “6 ‘N The Morning”.

Charting-wise the album reached thirty-seventh on the US Billboard 200, and eleventh on the US Top R&B/Hip-Hop Albums (Billboard). The album cover, featuring what appears to be a cartoonish version of Ice with a shotgun shoved in his mouth, and two pistols pressed inside each ear, is explained as follows, “’Go ahead and say what you want. But here comes the government and here come the parents, and they are ready to destroy you when you open your mouth’”.

The shocking “Shut Up, Be Happy”, featuring Jello Biafra, opens with heavy rain and the toll of a bell. This’s a sample of Black Sabbath’s “Black Sabbath”, as the ensuing guitar and drum confirm. The aforementioned cameo, of Dead Kennedys fame, appears as the voice of a totalitarian American military state. Basically this is black rap political conscience married with that of a, at times, very similar, yet largely white, punk ethos.

“The Iceberg” is quite a funky one, quite at odds with the album opener. This appears to start where “I’m Your Pusher” (from previous effort, 1988’s Power) left off, educating the music consuming public on what’s worth listening to, and what’s not. Yes, as it develops, it’s laidback, but you could suppose it has an element of social commentary maybe not totally at odds with the opener.

On point “Lethal Weapon” is a bit more like it. High octane and ominous, very much suiting its name, it has chopped up samples of Rakim, who, it turns out, is in similar ferocious form. “My lethal weapon’s my mind” is hardcore lyricism yet acknowledging he isn’t, strictly, a gun toting gangster. The fadeout has some brooding percussion, as Ice tells us the power of brain power.

Brilliant track, “You Played Yourself”, is easily one of the most classic songs in Ice’s entire discography. You daresay Jeru Tha Damaja found inspiration with his similar named track in 1996 (“Ya Playin’ Yaself”). He mixes hardcore delivery and ferocity with uplifting raps about staying in school and the like. He also seems to take aim at rap artists who become as such that they think they’re bigger than their fans, the ones who put them in that elevated position in the first place.

“Peel Their Caps Back” is moody, harking back to the sounds the album opened on. As such, it’s one of this reviewer’s favourite hidden gems regarding Ice’s discography. It has foreboding, sharp bass with a big drum sound that combines for an effort conveying much drama, accentuating the dark, lyrical subject matter.

A departure, “The Girl Tried To Kill Me”, is a rap rock number. If the album opened up with “Black Sabbath”, you could assume that such a track as this would appear eventually. It’s definitely of its time, with infectious Run-D.M.C energy. “She didn’t use a gun or knife/Took me within an inch of my life” sums up the sentiments, roughly.

Skit “Black ‘N’ Decker” opens with a heated discussion on Ice-T being labelled as violent, before pontificating what a power drill through the skull would sound…

“Hit The Deck” has a striking, maybe incendiary, sampled quote opening it: “I’m the minstrel man, the cleaning man/The pole man, the shoeshine man/I’m a n*gga man, watch me dance”. It’s high energy, arguably one to dance to. If you can keep up, that is. It’s a real workout for Ice, but he remains, never mind the tempo, as authoritative and commanding as ever. It’s complemented with some scratching, adding another moody aspect to the already tense soundscape. He doesn’t waste a spare second, spitting venomously to the end.

The principled “This One’s For Me” sees a more laidback vibe, but he’s as serious as ever. The beat, although slower, is triumphant, heralding verses full of wisdom. Arguably the spokesman for a generation. Particularly as the eminent emcee of the West Coast who, in turn, is roundly respected on the East Coast. Lines like “Sellin’ drugs is straight up genocide/They’re gonna laugh, while we all die” and “You know I want it, sure as I’m Ice-T/I make records for you/but this one’s for me” encapsulate the track perfectly.

“The Hunted Child” is frantic, very much evoking a child, maybe a byword for innocence, on the run, hunted by the police, parents and government. His raps come forward like machine gun fire, countering the onslaught of being amidst the chase. They’re delivered with passion and anger, you know he believes every word spat forth, like, “My life on Earth was hell, you understand?/But when I die I’m goin’ to hell, again”.

Second cameo track, “What Ya Wanna Do?”, features Rhyme Syndicate, and seems to start like an oldschool party number, as probably, furthermore, the exclamation of “Party!” suggests. This clocks almost nine minutes, evocative of an all-nighter, no doubt. The track’s proof Ice’s not the only weighty emcee in the Syndicate, emphasised by the fact he chooses only to appear on it very briefly.

“Freedom Of Speech” seems to concern the fact that Ice feels the notion, particularly in the States, of there being such a thing as freedom of speech quite laughable. Bass drum heavy beat, interspersed with James Brown hollering every so often, is the foundation for passionate raps that are veiled hollering in themselves. Punk rocker Jello seems to reappear, again. Via sample, though.

The album finishes with the slightly ridiculous “My Word Is Bond”. This quite braggadocio, as if to say every statement rapped is a matter of fact. A rap from one of Ice’s cohorts, Donald D, “Looked around for my brother, to see where he went/And then I had to pay my mother’s rent”, is half boast and half, yes, statement of fact. Highlighting, of course, the poverty of his past and, maybe now, his current financial power. Intermittent declarations of “stop lyin’!” makes the listener wonder, putting the ball in their court.

The high points on the album are tracks like “Lethal Weapon”, “You Played Yourself”, “Peel Their Caps Back”, “This One’s For Me”, “The Hunted Child” and “My Word Is Bond”. Excluding the skit, not even clocking a minute and a half, this is a healthy return for an album. These make up about half the album, and even then the remaining tracks aren’t too bad themselves, neither.

In “Lethal Weapon” you’re given hardcore, aggressive listening through metaphor rather than gangster posturing. “You Played Yourself”, furthermore, is one of his classics, a greatest hit, and must be worth something if Jeru Tha Damaja adapted its hook years later. “Peel Their Caps Back”, meanwhile, is dark and gritty, the personification of the whole album.

“This One’s For Me” proves he’s as much out to please himself than write songs just for fans, never to sell-out. “The Hunted Child” mixes his perfect diction with a righteous anger and venom, very much his signature sound. Finally, although “My Word Is Bond” dwells very much in exaggeration, Donald D’s line about paying his mother’s mortgage, now that he’s high profile and wealthy, sounds more like pride than idle boast.

Ice-T, opening with the doomy, bludgeoning sounds of Black Sabbath’s crushing instrumentation, and the foreboding predictions of Biafra regarding our potentially bleak future, released an album far darker and grittier than ever before. This, indeed, wasn’t much of a departure from his, as then, accrued discography. The opposite trajectory of selling out. You can purchase The Iceberg/Freedom Of Speech…Just Watch What You Say! on iTunes here.