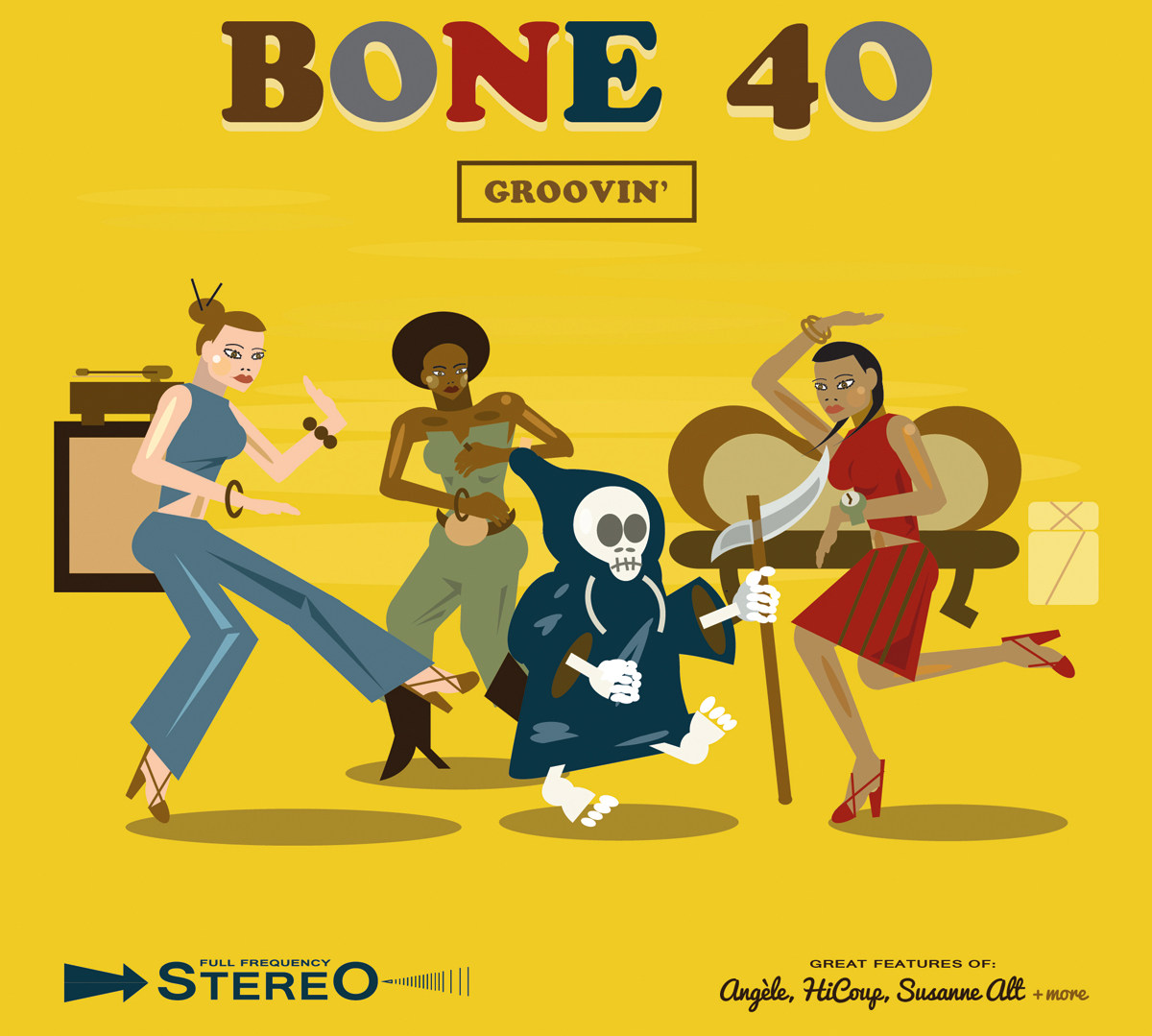 Joshua Boon, or Bone 40, is a small town Dutch producer who was born in the early Eighties. Apart from music, Boon works as a designer, illustrator and screenwriter. He’s described as having “caught the hip-hop-virus at the age of 10” through artists like Public Enemy, N.W.A and LL Cool J.

He craved a sampler and two turntables, sufficing with a piano and his father’s tape decks to sample with. Like many in his genre, his search for the roots of hip-hop led to explorations of the soul, funk, jazz and reggae (dub) genres. This, and in combination with the keys, was “to a balance between dark beats and melodious tunes”.

The Bijlmer resident “has furthered his love and passion for music and brings layered productions which balance between Hip-hop, Blues, Soul, Dub and Jazz, often laced with Bluesy improvisations”.

He composed, produced and co-wrote the critically acclaimed “SoulDubHop” album, I, by his group, Fuel Box, which was released end of 2011. His latest project, under the moniker of Bone 40, is an EP called Groovin’ which was released Monday, October 24.

Title track, “Groovin’”, opens proceedings, and features Daniel Sneijers and Susanne Alt. This opens with what’s either white noise or the crashing of waves, either way rousing instrumental soon follows it. Largely piano driven, bass and clapping drum underpin the arrangement. Sassy saxophone embellish the vibe, and then bluesy rock guitar comes in with its own satisfying chops. The former cuts back in before the guitar can reply, laidback in its feel and delivery.

The nursery rhyme invoking “Fee Fi Fo Fum”, features HiCoup and departs from the opening instrumental, with some rapping added to the mix. The drums lock you in, their rhythm infectious. The backdrop, generally speaking, is jazzy and bleak and evokes that feel of downtown New York. The hook doesn’t so much smell the blood of an Englishman, more that heads are about to be lopped off. The beat is stripped back, with minimal bass and clap, for the vocals to reverberate around the listener’s head.

“A Minute Of Jazz (Interlude)” is what it says on the tin. Moody bass and clanging piano locks in a soundscape of immediacy, one of being stuck in a hectic rut.

That very genre, “Cellar Skum”, vibes in this one, too, immediacy, again, the word. Under two and a half minutes, the track certainly crams in a lot of feel. It’s a curious chopping of instrumentation and samples, piano set against wayward synth lines.

The rousing “Scared” features Angèle De Jong and has the vibe of the underdog, victory nowhere near assured and yet they battle on nonetheless. The vocals have a haunting twinge to them, tragic and quite despondent. However, do they prophesise someone who, one day, will come to the aid of all afflicted? A flute-esque effect dances in the air as the bass snakes expertly along the bottom end.

“A Minute Of Funk (Interlude)” is, again, what it says on the tin. Some satisfying, what appears to be Hammond organ, gives the track a crunchy vibe. Or is it really deep, rattling bass, perhaps of the Rickenbacker variety?

The non-English “Mis” features De Tukker. The vocals appear to be in the cameo’s native French, with the undercurrent supporting his travails, very much foreboding with deep horn.

Then comes the final cameo track, “Landing”, featuring Tony De Roij. This has calming vibes, tinkling away peacefully, a melding, you could suppose, of all types of music. Jazzy certainly, but bluesy in its soulful expression, too. It’s closing moments hint at troubles ahead, but just minor bumps on the road.

“Fe Fi Fo Fum (Instrumental)” is as it says, but this time you can let the soundscape wash over you, let it ring in your ears. You look at it in a whole new way from this stripped back perspective, a good way to bring the EP to its closing stages.

The hi-hats rattle as they close together, spitting either white noise or the crashing of waves. A good link to the album’s opening, indeed. The closing minute briefly encompasses you with its bleak feel, but quickly rescues you from that despair. Intermittent stabs of rhythm, and rasping turns see it out.

Groovin’ ends with “Scared (Instrumental)”. Again, another opportunity to let the soundscape wash over you. As has cropped up with its initial form, you picture the hero riding gallantly into war and assured death. They’ve come in the nick of time, a moment later all would’ve definitely been lost.

Flighty strings, which weren’t really noticed before, add an extra sense of drama and tension. Highly strung, you could suppose. The bass itself, usually rooted in the low end of things in this project, takes momentary flight itself. It punctuates that drama, accentuating it, too.

Looking back, considering there are two interludes either side midway of this EP, plus two instrumentals of prior tracks at the end, three excellent songs is a really good return for this ten track effort. These songs are title track “Groovin’”, “Landing” and “Fee Fi Fo Fum (Instrumental)”.

The first, opening with its ambience of either white noise or crashing waves sets the scene suitably. The clapping drum is also the foundation for saxophone and guitar to trade satisfying licks. This is competing at a canter, complementing, a workout between the two with a really laidback vibe.

“Landing” tinkles away, a mix of a range of genres. Jazzy, with bluesy and soulful expression. Thematically, it also seems to have what’s a recurring, seemingly, feel throughout of trouble ahead; minor bumps on the road overcome through hard work, endeavour and a hint of heroism.

The third, an instrumental, as said, helps you appreciate what came prior in its non-instrumental form, as you notice aspects you perhaps didn’t know before. Like those rattling hi-hats, making a sound akin to white noise or crashing waves. A good link to the aforementioned title track opening the EP.

The track closing the EP, “Scared (Instrumental)”, isn’t too bad, neither. This very much develops upon the recurring theme discussed within “Landing”, only the mountain to climb is more arduous. The odds are slightly more stacked against said hero in this instance.

The two interludes certainly deserve a mention, too. The first, the jazz one, has clanging piano, a particular highlight. The second, the funk one, has deep, ringing what seems Hammond organ. Whether that or an overdriven bass, perhaps of Rickenbacker variety, really doesn’t matter. Indeed, it’s the sound achieved that matters the most.

Those two interludes and the two instrumentals, combined with the likes of the largely instrumental opening title track really help convey someone not only dedicated to promoting the progression of the art of rap, but also with excellent ability to not only sample, but utilise live instruments for hip-hop beats. For this reviewer, this particular emphasis reminds one of the recurring instrumental asides, entitled “Quik’s Groove”, on DJ Quik’s first three albums.

Bone 40 has really gone into exploratory mode with this one. It’s a perfect mix of instrumental, vocal and both approaches. It’s a refreshing take on what has sometimes has become quite a tired genre, in both the instrumental and vocal respects. Bone 40’s Groovin’ EP can be purchased on Bandcamp, and you can stream it below.