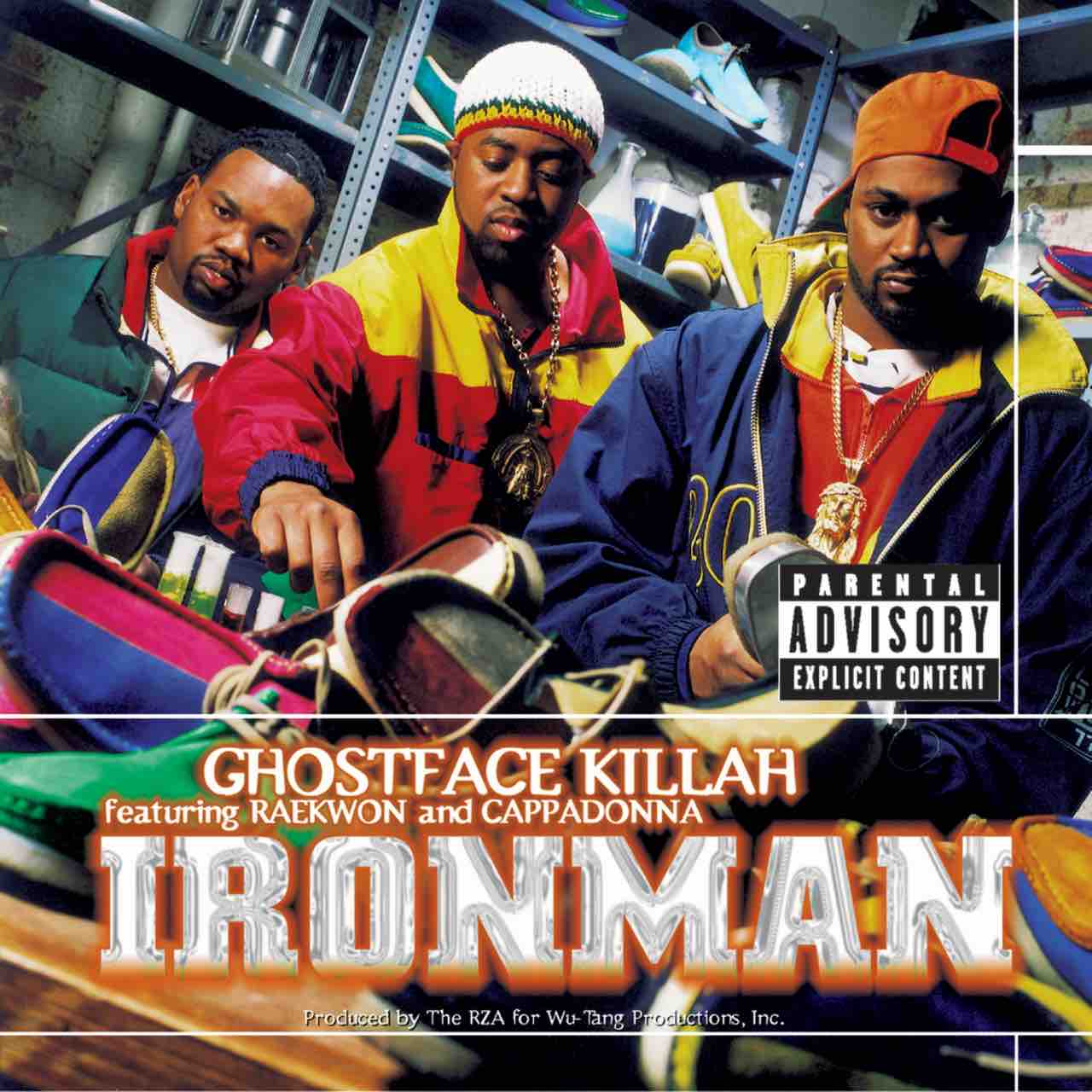 Ghostface Killah is an American rapper from Staten Island, New York, mostly known as a member of East Coast rap outfit, Wu-Tang Clan. His debut solo album, Ironman, came out in 1996, 20 years ago as of Saturday, October 29. It’s considered right up there with Method Man’s Tical (1994), Raekwon’s Only Built 4 Cuban Linx… (1995) and GZA’s Liquid Swords (1995) as Hip-Hop classics from that era.

The album cover’s simply shows Ghostface with album collaborators Raekwon and Cappadonna, and what appears to be the trio raking through some of their group’s own fashion line, Wu Wear.

Perhaps there’s a reference to Tony Starks’ other half in “Iron Maiden”, featuring Raekwon and Cappadonna. It opens with characteristic cinematic fervour before the motley crew kick in, inseparable as the gangs portrayed in the skit prior. Batman and Robin, and then some, to convey these three caped crusaders of rap. Police sirens feature in the beat, but whether they cut at the causes of crime, or actually commit it, is another thing altogether.

Then “Wildflower” opens bleak, like the reverie of smoking opium. A soundscape to put you in a lull, type of thing. Ghostface’s really off the chain in this one, mainly railing against women, for the most part.

There’s a theme recurring here in “The Faster Blade”, featuring Raekwon, as it has a similar beat, but the veracity of the dynamic duo is such that you’re shaken from any kind of drug induced reverie by the sheer weight of their raps.

“260”, featuring Raekwon, is like Batman and Robin driving down the freeway in pursuit of those who’ve wronged them or wronged the city of Gotham. It has a bluesy soul undercurrent to it, as if trying to conceal pain or chips on the shoulder.

Wu-Tang seem to have a bit of a gathering here, in “Assassination Day”, featuring Inspectah Deck, RZA, Raekwon and Masta Killa. It opens with the panting of a man evading death.

Does the title allude to this man being shot in an alley, unceremoniously dumped to the ground with none of the fanfare that followed JKF’s assassination? Deck quickly passes the mic to RZA, the latter’s verse sizeably bigger than the former’s. At this point, as Raekwon kicks in, this reviewer wonders that if Ghost is Ironman, does that make Raekwon Batman, and Cappadonna Robin?

There are some “Poisonous Darts”, which’s comprised of a one note bassline chopped like cocaine, certainly the aural equivalent of imbibing such a stimulant.

Ghost declares some “Winter Warz”, featuring Raekwon, U-God, Masta Killa and Cappadonna. It has a quite memorable hook performed largely by the, as said, Batman of the crew: “Yes, the sh*t is raw comin’ at your door/Start to scream out loud, ‘Wu-Tang’s back for more’/Yes, the hour’s four, I told you before/Prepare for mic fights (and plus the Cold War)”.

Then Ghostdini lets rip with his characteristic energy and verve, bouncing off metaphorical walls with lyrical haymakers. Robin, or rather Cappadonna, definitely comes across as the hungriest in this one, almost as if his air time is proportionate to the screeds of notepaper he arrived to the studio with. Apparently, though,  his verse was a freestyle.

Words tell a story in “Box In Hand”, featuring Raekwon and Method Man. Again, the word bleak comes to mind. It certainly evokes the inner areas of New York City, and all the street corners and liquor stores it encompasses.

“Fish”, featuring Raekwon and Cappadonna, is straight to the point in its opening exchanges, “We eat fish, toss salads and make rap ballads/The biochemical slanglord’ll throw the Arabs”, and there’s not much wondering what exactly the song title is alluding to. The backdrop, however brief in its loop, has a triumphant feel. Like dragging your boot straps up off from those streets and taking charge of your life, despite however tough and bleak it is.

The tragic “Camay”, featuring Cappadonna and Raekwon, has bass ringing in your ears as it ascends, and then descends, into utter hopelessness. Their vocal sample lends the track extra tragedy: “Love was never born to say goodbye/Just another fool in love”.

Standout track, “Daytona 500”, featuring Raekwon and Cappadonna, has a soulful introduction “’cos you can never f*ck with Wu-Tang Killa Bees”. An excellent vocal refrain, the backdrop pulled out, via Raekwon, really sets the scene and gets you in the mood for a race between three eminent emcees, with “Say peace to cats who rock MAC Knowledge Knowledges/Street astrologists, light up the mic, God/Acknowledge this”. Cappadonna is as veracious as ever, too: “Give me the fifty thou’, small bills/My gold plate, my slang kills/My beer spills, what up, lils?/Murder one, dun”.

The frank “Motherless Child”, featuring Raekwon, has an eerie vocal arrangement underpinning it, like the pain of blacks in the Deep South prior to civil rights, perhaps even within living memory of being transported there via slave ships. It’s a humming sound that, in some respects, never leaves you.

There’s a message in “Black Jesus”, featuring Raekwon and U-God, and it’s got a similar arrangement, though as if it were speeded up and sung higher, instead of hummed. Like the triumph of redemption, the strength gained from experiencing hard times, trials and tribulations.

The atmosphere of “After The Smoke Is Clear”, featuring The Delfonics, Raekwon and RZA, reads as it sounds. It has a booming beat, ringing bass met with the beat of the bass drum. Again, a vocal sample seems to form the crux of the backdrop, singing the song title, “after the smoke is clear, Wu-Tang will become/Number one”, in a way befitting a way in which to make your way through the smog.

Ballad, “All That I Got Is You”, featuring Mary J. Blige, is perhaps one of the most poignant songs in the history of the genre. Ghost unveils great embarrassment (“So embarrasin’, I couldn’t stand to knock on they door/My friends might be laughin’, I spent stamps in stores”) as regarding the poverty he endured as a child.

Pride and sense of achievement overcoming these obstacles is an element of it, but most of it’s remarkably sad (“Sometimes I look up at the stars and analyse the sky/And ask myself was I meant to be here…why?”). Definitely one of the biggest tearjerkers the genre has come up with so far, and this was back in 1996. A testament to its enduring power and relevancy, even today.

Poppa Wu’s closing remark in it is particularly memorable, answering Ghost’s prior question: “You see the universe, which consists of the sun, moon and star/And them planets, that exist in my space/Like man, woman and child/You understand?/We got to keep it real, and what reality/And reality will keep it real with us/I remember them good ol’ days/Because see, that’s the child I was/What made me the man I am today/See, ‘cos if you forget where you come from…you’re never gonna make it where you’re goin’…because you lost the reality of yourself/So take one stroll through your mind/And see what you will find/And you’ll see a whole universe all over again…”

Ironman surely ends with a comic book reference in “Marvel”, featuring RZA, the second track to snap you out of the reverie of the previous. Like being chastised for being overly sentimental and emotional. It’s like being confronted with the cold, harsh realities of life, forcing you to snap out of your, the previous track, self-pity and lovey dovey harking back to your childhood.

There are also a trio of tracks, in succession, to appreciate in “Motherless Child”, “Black Jesus” and “After The Smoke Is Clear” which all feel linked. The first opens with eerie humming, evocative of slave ships. Then the second feels similar in essence, but sung of redemption and triumph. The third, meanwhile, feels like a mix of both prior, the redemption and triumph of a people after the smoke is clear.

You then have links from near the start of the album, to its very end. These are “The Faster Blade” and “Marvel”.

Both of these shake you out of reveries sustained during their prior tracks. “The Faster Blade”, for instance, shakes you out of that opium haze that seems to pervade in “Wildflower”, the latter’s title maybe a nod towards said opium poppy crop. Then you’ve got “Marvel” shaking you out of the self-pity and, indeed, sentimentality of tear jerking rap ballad, “All That I Got Is You”.

There are at least a few classics amidst all the work done by the Wu-Tang Clan on an individual, solo level basis. This is certainly one of them, and there’s good reason why many regard this Ghostface Killah effort as, indeed, perhaps the best of them all. Ghostface Killah’s Ironman can be heard on iTunes here.