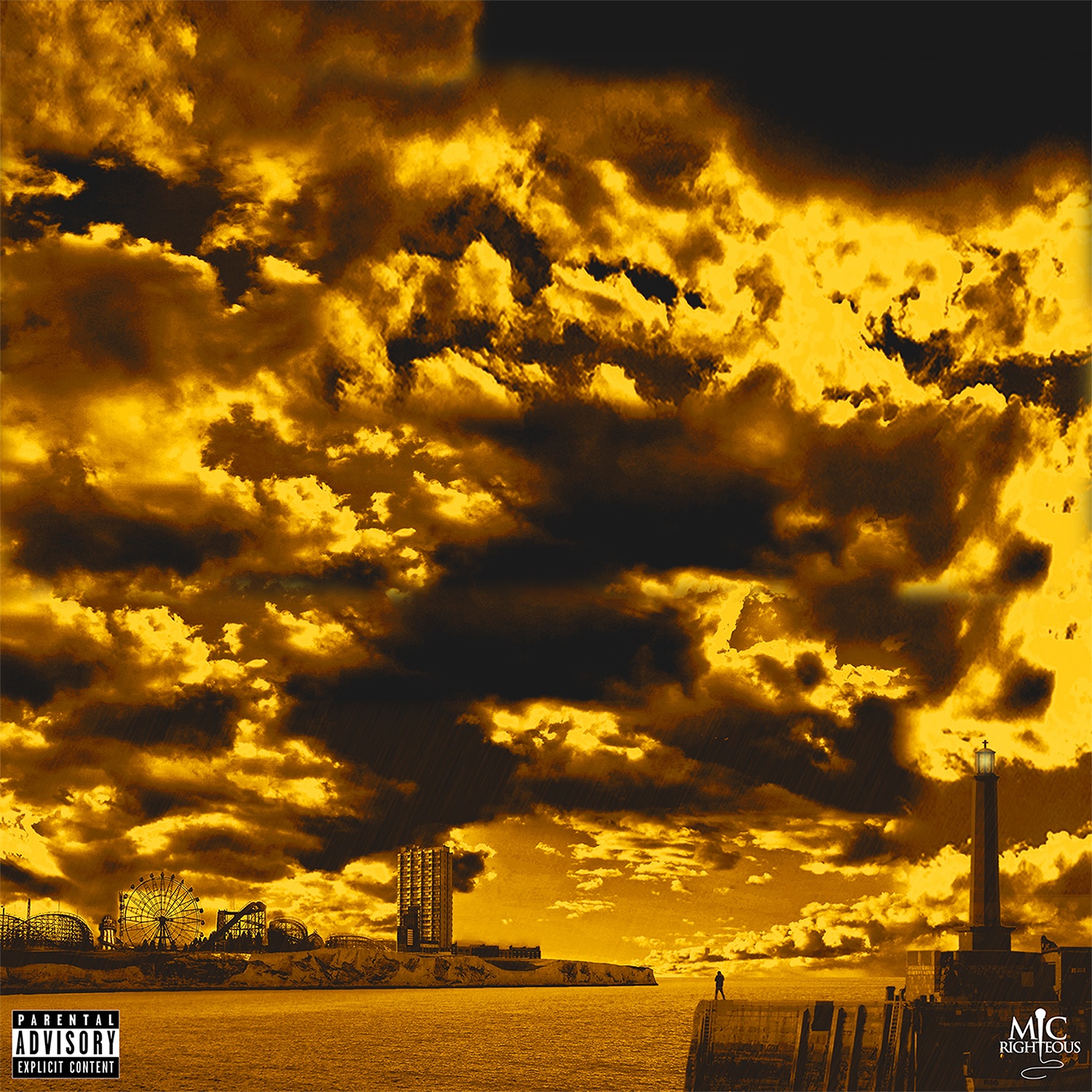 Mic Righteous’ anticipated album, Dreamland, was released on Friday, October 28. This was announced midway through his third and latest Fire In The Booth freestyle on BBC Radio 1 with DJ, Charlie Sloth. It went straight in at No. 1 on the Hip Hop chart and No.5 in the overall charts.

The album title is otherwise familiar for being a famous theme park in Margate, Kent, that used to bring in the kind of tourism the likes of Blackpool are known for. Not the case, these days. This has left Mic’s hometown being largely boarded up, representative of the decline in a lot of areas around the UK.

“Gone” opens proceedings haunting, desolate, with a hint of triumph should the hero rise against innumerable odds. There’s real venom in his raps, the passion far from merely reading lyrics off a page in the booth. For someone feeling their way through the UK scene, you could liken his delivery to N-Dubz’ Dappy, with similar high octane, top of the lung raps; but then some.

Mic’s a “Survivor”, which features Tone, and sees the rapper turn down into a different avenue. Very soulful, but with the grit of clapping drum and distorted hook. Like sung down a phone line.

He turns time back to “2005” which has tinkling, grave piano and details, yes, his life during the year of the song title. Then it picks up, the drama increasing as the raps speed up, riding upon the seat of his pants expertly.

There’s also “His Story”, which develops upon the autobiographical bent in the previous, the piano remaining the constant in the backdrop. The piano picks up in volume as the passion rises, in tandem with rising anger. The hook from the previous is revived, too, just in a different context.

The rather diverse “I Turn Up!” has a Far Eastern vibe, possibly Chinese. It evokes a UK addition to the Wu-Tang Clan. The beat is calm, though, set against his impassioned raps, sounds like, perhaps, simmering anger. Like kung fu extoling the virtues of controlled bursts of anger in combat.

The dedication of “The Kids” has driving bass and busy drum, a simple progression played out on the piano. The latter has a childlike innocence, and it’s only right, therefore, the song’s dedicated to his children.

The sonically profound “Tables” is layered in such a way it feels very, perhaps, ponderous. There’s chopped up guitar strumming and what sounds like distorted wailing of lead guitar, the latter like the despairing hollering of the afflicted in great pain. He sounds more animated than as of late, you can picture him getting red in the face and puffed out. Certainly doesn’t ever lack passion.

Mic appears to be getting ready for the weekend in “All Dressed Up”, featuring Tom Prior. It broods with piano and clicking drum, maybe rim shots. Then that almost bottomless bass kicks in, and the dynamics change completely. In club parlance this is what you’d guess most would call a banger.

There’s an aside in “4 Lines Deep”, featuring My Baby Mum, and it’s basically a skit detailing problems with the missus. Maybe setting the tone for the next half of the album, perhaps.

“Peak Levels”, featuring Tone, has that recurring piano lead tragedy. The vocal arrangement is quite elaborate, evoking deep emotions. There are moments of, practically, acapella, just the tinkling of piano under the vocals. Good dynamics. Then a hit of the snare signals and heralds a rise in the drama. The addition of bass guitar reinforces this, together with crashing drum. Top of the lung raps having you wonder if he ever gets hoarse.

The profound soundscape of “Penny” is foreboding with deep bass and drum somewhere between organic and industrial. It encapsulates the cavernous sound of bouncing and echoing all throughout the Grand Canyon. How one sound can achieve this is incredible, maybe even evoking the, like it or not, circle of life in the wilds of Africa. Maybe even the inner city streets and sink estates of Britain.

An aside crops up, again, in “Intellectuals Unite”, featuring Vivienne Westwood. It’s basically the latter stressing the pitfalls of modern day UK life. Probably a fair old jab at the current government, too.

Righteous will “Be There”, along with Tone, and has, again, piano, but with a different sound. It has a wobbly, ethereal quality to it, floating to the skies. Seeking heaven when life is too tough to live, anymore: “If you believe heaven is here/Then you’ll see heaven appear”. Busy jazzy drums accentuate his searching, ever busy flow. Tone also poses the question of, “If there’s a way out/Then who will show me?”

The strains of “Adamant” may take one down memory lane, as it seems like a nod towards Eminem’s track, “Marshall Mathers” (“My son’s nearly three and I can finally buy him nappies/Hey, hey, hey!”). In the spirit of the latter, he really rails at, what appears to be, the whole UK urban scene, how some are making it look a joke and the like.

Transcendental qualities seem to permeate in “Head F*ck”, so much so the word ethereal reappears in the effort to describe the sounds on this album. It’s likes monks singing in a monastery. Indeed, haunting like the start of the album.

He has a “Heart With No Beat”, accompanied by Danae, and opens with what appears to be his signature piano lead sound, brooding slightly before the track picks up the pace. He gets very philosophical, maybe even theological, speaking on Adam and Eve, and the like. Zaps of the electronic variety suggest a look to the future, perhaps one with a tragic existence and ever closer to annihilation.

His views on life, you could argue, can be heard on “Tempo Of The Dance”, and continues this ponderous frame of mind, getting sentimental looking upon how hard he struggled in the past. A soulful hook appears to be locked, accentuating the feel of the blues. Inner city and sink estate blues. The title appears to be quite a clever metaphor for the walk and, importantly, rhythm of life: “Make peace, make joy, and make money”.

The loud, righteous raps of Mic are, perhaps, set for posterity in “Honour Mic”. It has rattling drum and bottomless bass ringing, permeating, the backdrop. It seems a real lyrical workout, highlighting a propensity for adept tongue twisting.

Key points in the album are “Gone”, “The Kids”, “Penny” and “Head F*ck”. Not only that, but the album, on whole, comes together quite well.

Opener, “Gone”, for instance, links well with track, “Head F*ck”, as both evoke the word haunting, both for slightly differing reasons. The first very much sets the scene, helping the listener picture in their heads the current state of Margate’s Dreamland. The latter because of its lush soundscape, likened to monks singing echoing around the confines of a monastery.

Speaking of “Head F*ck”, this, in turn, links well with the earlier “Be There”. Both evoke the word ethereal, and, again, for slightly differing reasons. The first, as explained, has an eerie and haunting qualities to it. It wouldn’t be a stretch to say, because of the, maybe medieval, monastery of mournful, singing monks, that it’s got transcendental qualities very much within the remit of defining ethereal.

How this links, looking differently at the meaning of ethereal, is largely with the latter and comes with its wobbly piano. It’s got a general floating feeling, indeed and, in turn, the subject matter incurs in one an urge to bring life to an end or being on the verge of death.

As you, say float, you’re closer to death, the lyrics of “If you believe heaven is here/Then you’ll see heaven appear” and “If there’s a way out/Then who will show me?” are pretty pertinent. Indeed, as you approach death and heaven, things become ethereal.  Not of this world.

Mic Righteous certainly has his signature sound. Whether this is his impassioned, angry and righteous top of the lung rap delivery, or piano lead backdrops, he’s definitely his own man and sounds so. Mic Righteous’ Dreamland can be heard on iTunes here.