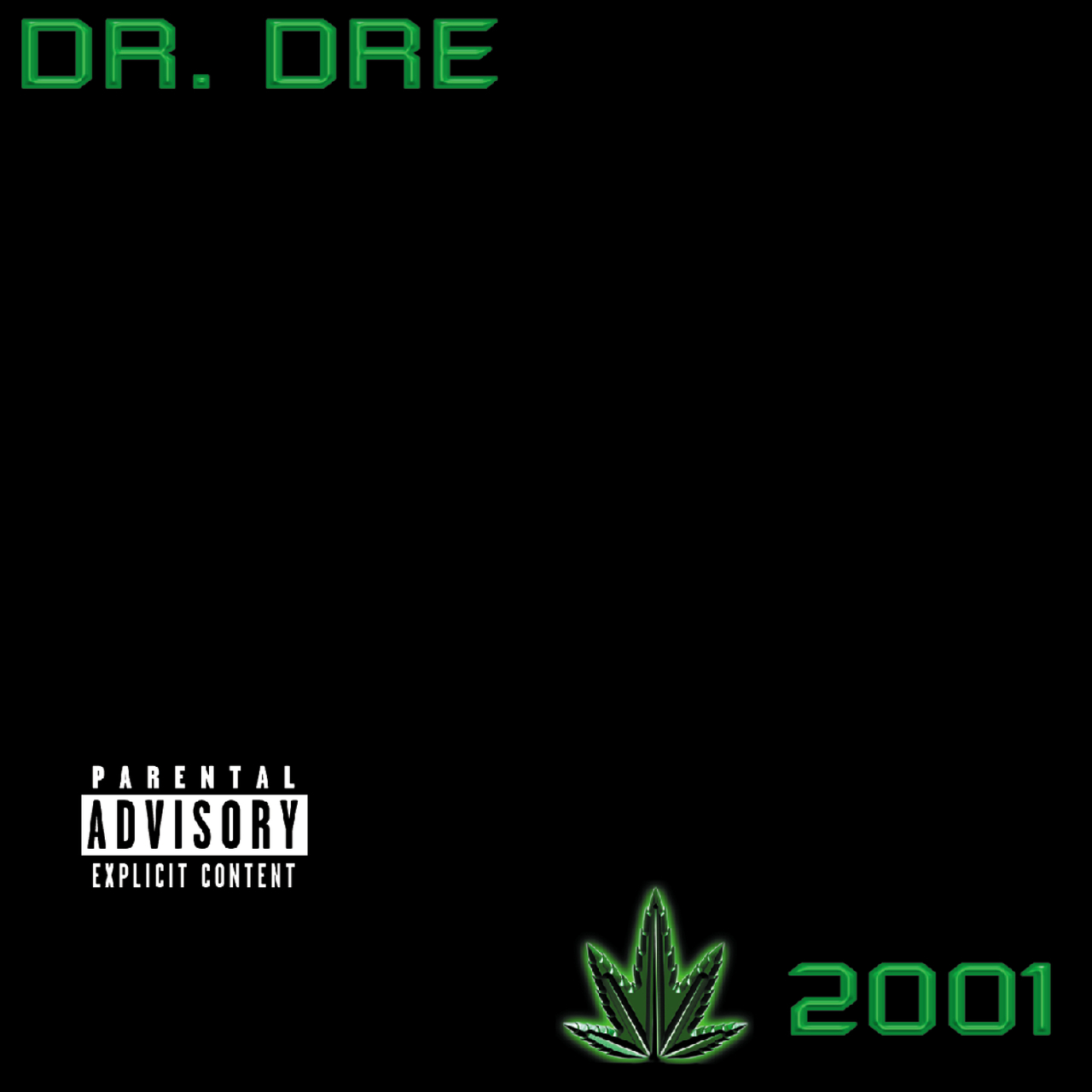 Dr. Dre had a lot to contend with, more or less, in the years after releasing his 1992 debut classic, The Chronic. Once he was done launching the careers of the likes of Snoop Dogg, Warren G and, later, Eminem he struggled to follow up with a sophomore effort.

Thankfully, after much negative press from the critics regarding his compilation Dr. Dre Presents…The Aftermath (1996) and his involvement in The Album (1997) by The Firm, he could claim, strictly speaking, a classic sophomore on a technicality.

This came in the form of 1999’s 2001. Yes, 1992 was a distant memory for many of those who snapped up this latest offering, but those same people looked upon this super producer as one with, technically, an unblemished record.

Listening to this album even now, seventeen years as of Wednesday, November 16, it’s easy to say why. Even the album cover is an exercise in understatement, a black backdrop and minimal fluorescent green font declaring artist, album title and, yes, a nod to the famous chronic leaf.

Opening entrance, “Lolo”, features Xzibit and Tray-Dee (or Big Tray Deee). This appears to open with the ‘Betamax’ theme tune, with the two cameos going ape at Dre’s ridiculous hydraulics.

It’s the album proper with “The Watcher”, and it’s an absolute classic, with moody bass and big horns triumphant and stomping down the street. It’s basically Dre pontificating his label as a gangsta rapper, saying he’s only human and by no stretch of the imagination invincible. Then a gunshot fires as if to snap him out of the reverie of contemplating his image and reputation.

The blunt “F*ck You”, features Devin The Dude and Snoop Dogg. This one appears to be dedicated to women other than the wife, basically. Moody’s, again, the word with low, grooving bass and sexy licks of wah-wah guitar. Devin’s “You can give me some h*ad, but keep the breakfast in bed/I’d rather spend my mornin’ diggin’ through some records, instead” line particularly memorable. Snoop, ahem, as blunt as ever in his raps concerning the ladies.

The album continues with anthem, “Still D.R.E.”, featuring Snoop Dogg. It’s an absolute, yes, classic. The harp-esque sound is infectious and addictive. So simple, playing only, what seems, about two different keys. Maybe the key to its enduring status as a classic, along with lines like, “I’ll break your neck, damn near put your face in your lap/N*ggas try to be the king, but the ace is back”.

The incendiary “Big Ego’s” features Hittman. This one’s, yes, moody but also grave. The piano that plays is fatal, suiting the subject matter perfectly. Shimmering, trippy licks of guitar pervade like marijuana smoke, like Dre’s smoking line, “If Cali blew up, I’d be in the Aftermath”. “I don’t sympathize for wack h*es and wimpy guys/You gotta recognize Hittman is an enterprise”, Hittman proclaims.

The seemingly self-explanatory “Xxplosive” features Hittman, Kurupt, Nate Dogg and Six-Two. You hear those licks of guitar, with tinkling, trippy percussion and you’re transported to a carefree and vibed out environment. “Don’t wanna treat you wrong/Don’t wanna lead you on/Here, baby, hit the bong/While the West Coast rolls along”, Nate Dogg hooks addictively.

The not near from classic “What’s The Difference”, features Xzibit and Eminem. This has that signature Dre, triumphant horn arrangement sound. Like stomping down the street with supreme strength. A titan, a giant. It also has that creepy vibe that a lot of Eminem’s Dre produced stuff is peppered with. Suiting that he does cameo on this, after all.

“Bar One” features Traci Nelson, Ms. Roq and Eddie Griffin. This is the, bar “Lolo”, first skit on the album, two ladies in the club, seemingly, bumping into Dre during a mission to locate eligible bachelors.

Then there’s “Light Speed”, featuring Hittman: “Light speed, blazin’ chronic through the galaxy/Hydro, doja, chocolate Thai weed/Or we might be sippin’ on gin or Hennessey/F*ck that, where that new sh*t, the chronic iced teas?” This’s moody and sedate, creating real atmosphere with what now appears to be signature licks of guitar.

The second self-referencing track, “Forgot About Dre”, features Eminem. This is the Doctor railing against his detractors. “Who you think taught you to smoke trees?/Who you think brought you the oldies/Eazy-Es, Ice Cubes, and D.O.Cs, the Snoop D-O-double-Gs/And the group that said ‘Mothaf*ck the police?’” Eminem highlights the scale of the producer’s anonymity in, “…and when the cops came through/Me and Dre stood next to a burnt down house/With a can full of gas and a hand full of matches/And still weren’t found out (Right here!)”.

The hook’s also one of the most iconic in the genre: “Nowadays, everybody wanna talk/Like they got somethin’ to say/But nothin’ comes out when they move their lips/Just a bunch of gibberish/And motherf*ckers act like they forgot about Dre”.

Following that is classic “The Next Episode”, featuring Snoop Dogg, Kurupt and Nate Dogg. Another anthem already and you’re only at the half point. Those funky licks of guitar, that ominous and grand string arrangement all designed to drive the clubs crazy, whenever the deejay decides to give it a spin.

Weed anthem, “Let’s Get High”, features Hittman, Kurupt and Ms. Roq. It’s irrepressibly funky, but moody, too. The bass grooves as everyone on the dancefloor grinds down low, bottoms hitting the floor.

There’s fighting talk in “B*tch N*ggaz”, featuring Snoop Dogg, Hittman and Six-Two. This is like a parting shot aimed at all Snoop and company aim to leave behind in the immediate future. Talking like gossips, their sole purpose only putting forward small talk and nothing else.

“The Car Bomb” features Mel-Man and Charis Henry. This one’s a skit where basically an arguing couple get bumped off via, yes, a car bomb.

The deadly “Murder Ink” featuring Hittman and Ms. Roq, has urgent piano, fast like the dialling of nine, one, one. The bass is low and ominous, as all on track swap tales of bumping off competitors and pests. “Who’da thought a sexy b*tch could be a murderous sniper?” asks Roq.

“Ed-Ucation” features Eddie Griffin. This intermission ventures that maybe the biggest pimp is not the chauvinist man, rather it’s women pimped by their own mothers: “What happened to just fallin’ in love with a n*gga with a bus pass?”.

Gang track, “Some L.A. N*ggaz”, features the coming together of West Coasters Defari, Xzibit, Knoc-turn’al, Time Bomb, King T, MC Ren and Kokane. This one has tight, sparse bass locking in with harsh drums, as all on the track represent their area with sizeable pride. Xzibit’s as ferocious as ever in, “If I catch you touchin’ mine you catch a flat-line, dead on the floor/Better than yours, drivin’ away gettin’ h*ad from a wh*re”.

Domestic matters are dealt with in “Housewife” and features Kurupt and Hittman. This one’s quite laidback, ponderous bassline and licks of muted, funky guitar. This one’s basically Kurupt and company pontificating that, perhaps, the woman you hook up with for hmmm, recreation, perhaps isn’t the one to hook up with in the domestic sense.

“Ackrite” features Hittman. This is where the latter, featuring throughout the album, gets a rare workout all of his own: “Blunt in my left hand, drink in my right/Strap by my waistline, ‘cos niggas don’t fight/Sucker free for life, so you better think twice/(Aight? And a give a n*g’ some ackrite)”.

“Bang Bang”, featuring Knoc-turn’al and Hittman, concerns, indeed, gun violence. The hook comprises of shouts as the trigger is pulled and shot. Muted picks of guitar evoke cop shows and the criminal element evading the long arm of the law.

The closing track, “The Message”, features Mary J. Blige and Rell. This is a total departure from the sound of the bulk of the album. It’s apparently about his late brother, the raps are frank and reveal a totally different side to Dre. Grieving brother, sensitive and thoughtful: “I done been through all emotions, from in shock, to keepin’ a poker face/To straight breakin’ down and showin’ all emotions/I’m anxious to believe in real Gs don’t cry/If that’s the truth, then I’m realizin’ I ain’t no gangsta”.

The backdrop shimmers, the soulful histrionics of Blige like the cries of pain as yet another mother loses their child to the streets: “I’m tryin’ to tell you somethin’ good/Don’t get caught up in the ‘hood”.

The best tracks on this album, plenty others very good, are “The Watcher”, “Still D.R.E.”, “Xxplosive”, “Forgot About Dre”, “The Next Episode” and “The Message”.

This reviewer would argue, amidst perhaps passionate debate declaring otherwise, that this is better than stonking 1992 classic, The Chronic. After all, wouldn’t it make sense that the evolution of Dr. Dre as a producer would go in tandem with a better album? Dr Dre’s A 2001 can be bought from iTunes here.