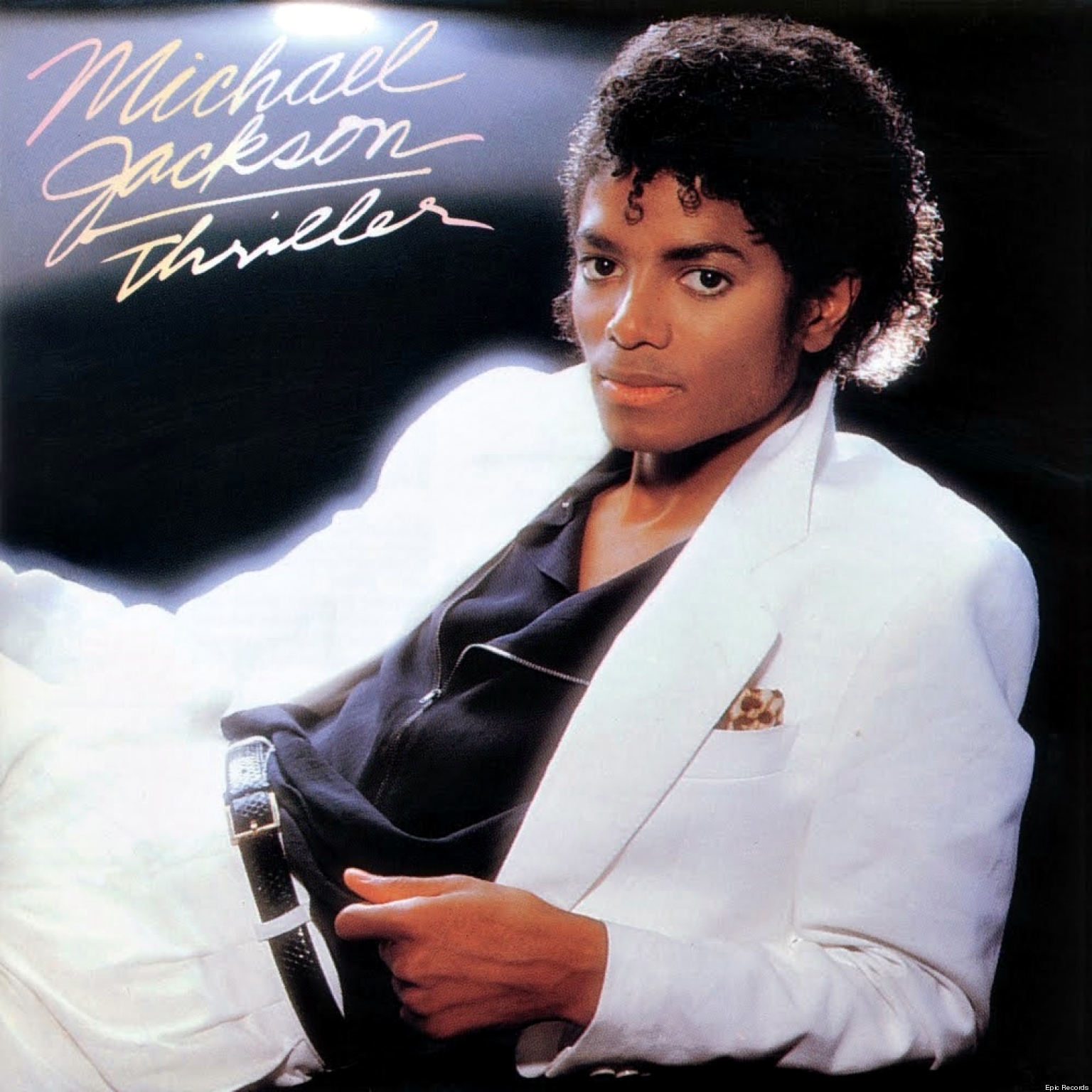 In 1982, Michael Jackson teamed up with producer, Quincy Jones, again, to record, via CBS and Epic, his sixth solo studio album, Thriller. Four (“Wanna Be Startin’ Somethin’”, “The Girl Is Mine”, “Beat It” and “Billie Jean”) of the album’s nine tracks were written by Jackson, and seven (leaving out “Baby Be Mine” and “The Lady In My Life”) of that nine in total were released as singles.

Three of these had music videos, and Thriller was one of the first albums to use music videos as successful promotional tools. Videos for “Thriller”, “Billie Jean” and “Beat It” all received regular rotation on MTV. These, appearances on MTV, and meeting with President of the United States, Ronald Reagan, at the White House went someway to dismantling racial barriers in pop music.

Before the success of the album, in fact, MTV attracted resentment in the way they appeared to go out their way not to air videos by black performers, prompting CBS Records President, Walter Yetnikoff, to tell them, “I’m not going to give you any more videos and I’m going to go public and f*cking tell them about the fact you don’t want to play music by a black guy”.

Perhaps this set things in motion, in just over a year, for Thriller to become the, as yet, undisputed best-selling album of all time. This is in excess of 65 million copies worldwide. This also includes a record-breaking eight Grammy Awards in 1984.

It will be thirty four years old as of today (November 30), and it’s aged well. Perhaps not so much when you look at the album cover: an effortlessly young, lithe and attractive man suited and spread across the front’s width of any said, vinyl, cassette or CD. What an unfortunate transformation when you consider him and the well-worn topic of his appearance, particularly in his dying years.

Thriller begins with “Wanna Be Startin’ Somethin’”, which’s moody and upbeat, hammering a rhythm for dancefloors around the world. The triumphant horns accentuate this effect, along with the rapturous backing vocals proclaiming “yeah, yeah!” It has the hallmark sound of just about any Jones and Jackson work, multiple layers all serving one purpose: an ensemble coming together simply to make good music.

Funky guitar cuts in just after the midway point, an aside to get the dancefloor yet more animated. “Scream out to the world…let the truth unfurl” an impassioned cry from Jackson before adjoined by almost world music influenced backing vocals. Very African, very colourful.

Then he asks “Baby Be Mine”, evoking that word, moody. In a different sense, though, especially that grooving bass underpinning that entire arrangement. Intermittent licks of guitar embellish the vibe, for if they played more than stipulated in the track, the vibe would be lost. It does reach heady heights, though, the chorus quite joyous with its clapping and zesty energy. Horns, like in the previous track, herald happiness.

The trip of pleasantries that’s “The Girl Is Mine” features Paul McCartney. It’s a tad saccharine, though can be enjoyed should you not take yourself too seriously. It’s got a laidback vibe, and the two certainly bounce off eachother, though, perhaps, not in the competitive sense. Not so much as one-upmanship as playful boasting.

Ground-breaking title track, “Thriller”, features Vincent Price, and definitely deserves to be the album’s focal point. There’s that extended introduction, before those triumphant slabs of synth declaring the victory of the undead. Then that thick bass laces that cyclical groove, a foundation upon which Jackson hits those highs.

The middle section veers in a completely different direction, though still satisfying and not detracting in the slightest. Then, in time for that famous, ghoulish voiceover, the song gets yet funky, an understated, ringing groove. Then that horror movie organ heralds insane laughter.

The raucous “Beat It”, featuring Eddie Van Halen, opens with a drum beat, almost unsuspecting for those who’ve maybe not heard this one before. That badass guitar flashes brilliance, a perfect R&B and rock hybrid crossover. The riff gets a bit chunky after the midpoint, a perfect bedrock for some pretty awesome and, at the time, revolutionary lead guitar playing, aided by lines like, “Don’t wanna see no blood, don’t be a macho man”.

Yet another anthem, “Billie Jean”, has pounding drum, bobbing bass; setting the scene for some urban street swagger. Breakdancing vibe when hip-hop was still in its mainstream infancy. An absolutely fantastic vocal performance verse to pre-chorus, pre-chorus to chorus. Impassioned, despairing of Lady Trickery and of how “Billie Jean’s not my lover”.

Funky licks of guitar focus on embellishment of rhythm and melody, rather than pumping notes of little advancement to the song as a whole.

“Human Nature” is, quite easily, the highlight of an album chock a block with highlights. Understated, moody and deploring of the horrors of humanity, it’s a beautiful piece of pop music. Middle sections appear strong in this album, and this one’s no exception, either.

He doesn’t adlib all over the place, only ever singing what suits the track, and what the track needs. The closing moments seem to indicate, imploring, that humankind change its ways. No happy ending guaranteed.

“P.Y.T. (Pretty Young Thing)” seems almost throwaway in comparison to the rest of the album. A classic on anybody else’s album, kind of thing. Thick bass, electronic infused voices and funky guitar all conspire to raise a smile of enjoyment, even if the listener’s a tad self-conscious.

The performance of each individual playing on this track’s exemplary, and would’ve probably been an absolute joy to witness live. Certainly would’ve got everyone dancing.

Thriller ends relatively sedate with “The Lady In My Life”, later sampled by LL Cool J (“Hey Lover”). This one’s markedly more downbeat than just about anything else on the album. However, classic albums need variety, and so it certainly fulfils that purpose.

Forlorn, tragic but, more than anything else, tuneful. The bass playing rings out, sad and true, before popping passion lifts the more sedate moments. His voice’s overdubbed for the closing passage, a foundation over which to get ballsy and histrionic.

The cream of the crop on this album, a few others very good, are “Thriller”, “Beat It”, “Billie Jean” and “Human Nature”. The first, of course, you may primarily associate for its visuals that, to this day, you still ponder have aged well. The song, however, more than holds its own. It hits you in the gut, infectious as those brain eating zombies depicted in its video.

The hooking pop of the aforementioned works wall against the more rock sensibilities of “Beat It”. This definitely set in motion the white rock and black R&B crossover witnessed on subsequent album, Bad. It’s incredibly badass and really grooves at the same time, satisfying the rockers and also getting them on the dancefloor with the more trendy crowd.

“Billie Jean”, feasibly it could be said, caters wholly to the trendies and weekend dancers. That wouldn’t stop the rockers, however, silently nodding their head to the beat yet, at the same time, taking no part, whatsoever, in dancing to that particular moody number. It’s possibly in the top three of his all-time hits, and it’s no wonder why, really.

As suggested, already, “Human Nature” completely transcends anything Jackson has ever written or performed on. It, rather cruelly, wouldn’t make that aforementioned top three, but songs like this usually do their magic not being compared to the ‘big guns’. It’s one of the best hidden gems to be compared to any massive star’s said likewise discography.

Perhaps for many people at the time, it was almost impossible to see Jackson’s career trumping anything beyond his 1979 classic, Off The Wall. That he did, though, and this, those stonking mega songs the album spawned, was carried out in incredible style, indeed. Michael Jackson’s Thriller can be bought from iTunes here.