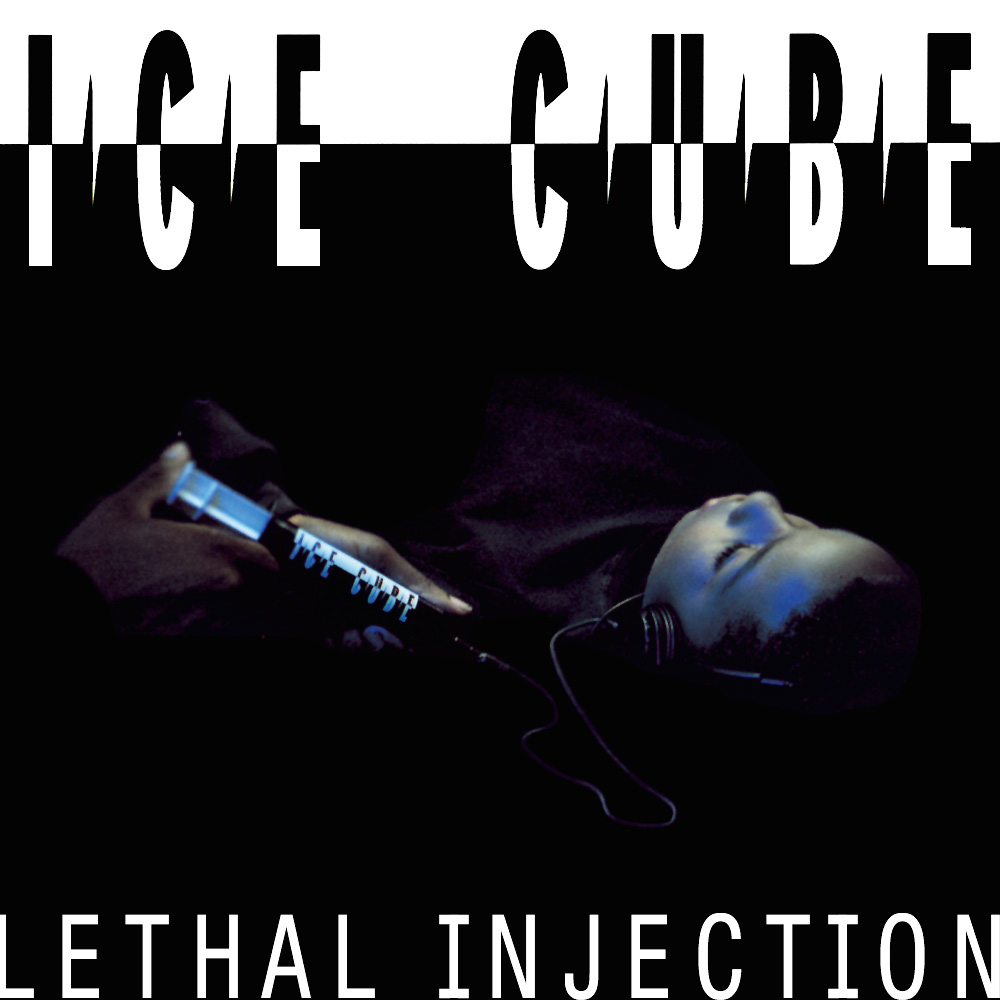 Lethal Injection is the fourth studio album by rapper, Ice Cube. It, like the three previous, was a sizeable commercial success, reaching at #5 on the Billboard 200, and with 215,000 copies sold in its first week.

However, it frustrated many sad to see largely removed the socio-political aspects heard in his three previous efforts, in favour of a more hardcore, gangsta rap sound. One could perhaps see a similar career trajectory looking at 2Pac’s career, comparing it before and after his signing to Death Row Records.

On the other hand, looking back in retrospect, to December 7 of 1993, the album’s matured well in its twenty three years. It spawned singles “Really Doe”, “You Know How We Do It” and “Bop Gun (One Nation)”.

Its album cover’s a curious one, one very much befitting its title.  It has what appears to be a patient laying flat, covered from the shoulder down, plugged into a set of headphones.  These are, in turn, connected to a syringe labelled “Ice Cube”. Is this a fatal shot to the head, a Lethal Injection?

Opening track, “The Shot (Intro)”, has a, presumably white man, Mr White, patient in the doctor’s surgery, with Ice Cube administering the shot. A gunshot to be precise. Incendiary.

After that gunshot is “Really Doe”, a moody and foreboding track with rumbling bass and flourishes of fatal piano. Ghostly vocal samples give it an almost apocalyptic feel, particularly the hook of “You got to believe in somethin’, why not believe in me”.

Lines like “You lookin’ for a punk with benefits/’cos you got a baby that take many sh*ts/And you know I got a grip like a baby on a tit” depict families bereft of money in a cycle of poverty, with limited options for going forward.

There’s more venomous social commentary in “Ghetto Bird”, which begins with slabs of ringing keyboard before wayward G-funk synth weaves its melody over the top of the track. For those not familiar, the track’s about police helicopters’ surveillance of problem neighbourhoods, having its inhabitants feeling enclosed and viewed upon like animals in captivity.

It’s slightly different in outlook come “You Know How We Do It”. Another vibe entirely, very kicked back and soulful. That distinct G-funk synth rings evocatively, this time, of back garden barbeques and the like, a meeting of friends and animated conversation: “…and I’m talkin’ to Dub/About who got a plan; who got a plot/Who got got; and who got shot”.

Licks of guitar certainly further that summer feel, California in sonic form. The drum locks in solidly throughout, a simple beat yet so entrapping in its consensual hypnosis.

The rather controversial “Cave B*tch” starts with a Nation Of Islam lecture. Incendiary’s definitely a word that could be used more than once in the instance of this album. It deplores white people as prehistoric, and the hook repeats “white b*tches have no butt, and no chest”.

“The Devil sent you to tame us…smilin’ ‘cos you out on a date/But sooner or later, the bitch’ll yell rape” of course providing stark comment upon interracial relationships. “Now don’t think that I hate you/’cos I won’t date you/Bitch I gotta stay true” is perhaps Cube’s way of brokering some sort of compromise with white society.

The following song was arguably, at that point, the most commercial track Cube had ever released. “Bop Gun (One Nation)”, featuring George Clinton, is infectious, with simple clapping drum, again, locking you in. With your consent, of course. This heavily samples Funkadelic’s “One Nation Under A Groove”.

Well over the ten minute mark, Cube takes his time between verses. In a way, this enables the funky backdrop to sink in and let the listener vibe off it. It very much feels like the after party to “You Know How We Do It”, and not in just the beat of the drum.

Cube asks “What Can I Do?”, which opens with “In any country, prison is where society sends it’s failures; but in this country, society itself is failing”. This feels like the comedown from the previous party tracks, pockets bare from the excesses of the night before. “Already done stack me half a mill ticket/Bought a house next to Prince, so now I can kick it”, meanwhile, appears to be him reflecting upon his success, a boy done good.

Then he dips back into the social commentary in “I got a baby on the way, damn it’s a mess/Have you ever been convicted of a felony? Yes/Took some advice from my Uncle Fester/All dressed up in polyester/Welcome to McDonalds, may I please help you?/Sh*t, what can I do?”

The warnings of “Lil Ass Gee” initially has Cube perplexed at a neighbour waiting for God and Jesus to help; nothing, he views, proactive in their outlook. The backdrop is heavy and intimidating, that apocalyptic feeling rearing its head, again. He rails against the black youth of America joining gangs instead of staying in school: “You don’t wanna be like Mike, you wanna be like me/A fool, a killer, a lil’ ass gee”.

The second and last cameo track, “Make It Ruff, Make It Smooth”, features K-Dee. The title’s quite apt as the track is both hardcore, with clapping drum, and laidback, with that funky bassline. Cube the ruff, K-Dee the smooth.

“It’s like a jungle sometimes it makes me wonder/How I keep from goin’ under/I’m chocolate thunder” is Cube evoking “The Message” by Grandmaster Flash And The Furious Five. Also “I hate when niggas get too f*ckin’ sexy on the track/I’m pro black” a polite dig at his cameo guest, perhaps?

“Down For Whatever” returns to that dead end vibe, as if hope is gone forever. “When I was little I didn’t wanna be like Mike/I wanted to be like Ike [Turner]” a line that seems to endorse poor role models. A somewhat more positive rap is in “…I’d rather see a skinhead dead/Than my n*ggas wearing blue or red”. The closing moments ring in your head, eerie and far from the pleasant lives of, let’s say, the vast majority of society.

“Enemy” opens with “You gonna walk with your enemy before you learn to walk with one another?”, likely sourced from another Nation Of Islam lecture. The song appears to be aimed at said vast majority of society.

It’s perhaps only in this one you realise it’s generally the white population in question: “1995, Elijah is alive/Louis Farrakhan, NOI/Bloods and Crips and little ol’ me/And we all gettin’ ready for the enemy”. Is this to carve up America into one black half, the other white; or even ethnic cleansing?

To end things, Cube ponders “When I Get To Heaven”. It has Cube, again, perplexed at a neighbour waiting for God and Jesus to help. “Jesus will get me another one” the retort when Cube asks if he won’t mind him taking his car.

Perhaps the most pertinent line of the whole, rather strangely kicked back, song is: “The Devil made you a slave/And he gave you a Bible/Four hundered years of gettin’ our ass kicked/By so-called Christians and Catholics”. Later in that same verse is what the nonreligious widely hold as universal truth in “…’cos all I see, all I know/The church ain’t nothin’ but a fashion show”.

A cursory glance back at the track listing for this excellent effort points towards “Really Doe”, “Ghetto Bird”, “You Know How We Do It”, “Bop Gun (One Nation)” and “When I Get To Heaven” as the tracks to argue into the annals of Ice Cube’s ultimate song playlist, drawing from his complete, overall discography.

For many, this album was quite a departure from the sound Ice Cube had established in his previous three solo albums. However, the mark of the man as a musician is as such that said many still consider this, indeed, amongst his most very classic of albums. Ice Cube’s Lethal Injection can be heard on iTunes here.