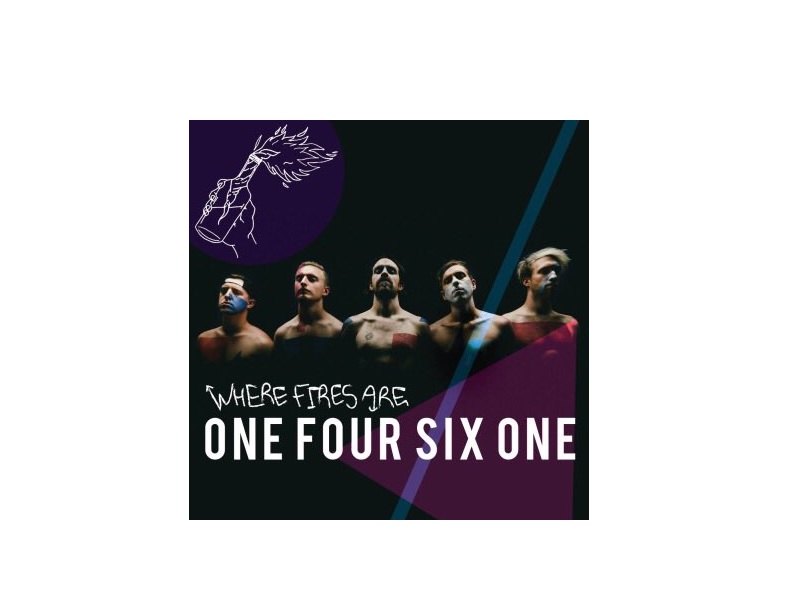 Where Fires Are released their EP, One Four Six One, yesterday (February 2).

Hailing from Leeds, the five piece came to some prominence with the 2015 Orange EP, recommendations from the likes of BBC Introducing’s Alan Raw and BBC 6 Music’s Tom Robinson. They were also tipped as “explosive, intricate Alt Rock” by Q Magazine.

A “veritable whirlwind” on stage, Where Fires Are have secured slots at some of the UK’s biggest festivals including Reading and Leeds, Tramlines, Live at Leeds, Kendal Calling and Willow Festival while also expanding their fan base.

You’re told “I’ve Got The Time” first. This crashes in, no messing about. Despondent, ringing. The vocals are somewhat Chris Martin of Coldplay fame, though. The verses let the bass permeate, sedate and moody. “All I see is a sea of grey, it’s in my mind/All the time” really encapsulating the overall feel, the vocal harmonies somewhat reminiscent of progressive rockers, Yes.

Chugging drums and bass spatter machine gun fire, as ominous lead lines weave over the top. Dragging flourishes of guitar and drum as one see the track out.

Then “It Feels Right”, which opens with raking flourishes of bass guitar, as the guitar rings with suitable ambience. The drums kick off quite a jazzy and curious verse: “…tired, but I want more”. Lead guitar lines give emphatic feel, driving and striving. “Don’t sleep tight/Tonight” simple as the feel of the kicked back vein to the track.

“I’m tired of being a whore, abused by all the ghosts I should’ve left behind/They’ve haunted me a thousand times” really poignant, yet to the point and very blunt. The bass introduction reappears, heralding crushing guitar, thick, crunchy and overdriven. Percussion, light like xylophone, washes over you, before “I keep lying, but I don’t mind”. Powerful rocking guitar and drum absolutely obliterates.

The announcement of “I’m Here” is a grooving rocker, angular and peculiar. Again, there are laidback moments you wouldn’t normally expect from a band in this genre, yet they pull it off and pull it off good. Strains of piano can be heard, and they certainly add a graveness to proceedings. The drums, tribally hitting the toms, really build an ambience. It ends with imploring and impassioned vocal.

It’s very black and white in “Die Or Survive”, and this sees the piano shoved more to the forefront. Those bass keys really add depth to this distorted rocker. There also appears to be chords strummed on the bass guitar, not a dynamic a massive proportion of bands in any genre uses.

It veers between loud and mighty and also quiet and ponderous. Melodically centred lead playing, focusing on composition rather than guitar wankery, adds that extra emotional aspect. The energy as it rocks to its end is almost on an empowering scale.

The EP peaks particularly with tracks “I’ve Got The Time” and “It Feels Right”. These constitute the first half of the project. There’s no shame in this, as this makes half of proceedings more than worth your while. What you can say about the second half, from “I’m Here” to “Die Or Survive”, is that there’s a clever continuity in which piano features in both tracks. Subtle strains, then more out front.

The opener, “I’ve Got The Time”, has bass afforded unusually satisfying space, which is followed by the Coldplay and Chris Martin comparisons. Then the vocal harmonies are somewhat reminiscent of progressive rockers, Yes, too, so refreshing and pleasant to the ears.

A lot of bands in this approximate genre focus on both brutality of instrumentation and vocal, though not in this instance. They’re also people pleasers in a sense, machine gun drum and bass for the head bangers.

Following track, “It Feels Right”, also affords time for bass guitar with a raking flourish to start the track. The guitar rings with suitable ambience, and the drums kick off quite a jazzy feel. That latter element again making things so refreshing. Dynamics come to the fore with guitar, thick, crunchy and overdriven, subsequently contrasting with percussion, light like xylophone, washing over the listener.

Where Fires Are are an almost perfect balance between emphatic alternative rock and more sedate, ponderous aspects. Elements like very melodic vocal arrangements and likewise bass guitar put them head and shoulders above most other bands in the genre. In fact, some of it sounds positively jazzy, and therefore totally refreshing. Where Fires Are’s One Four Six One EP can be purchased, here.