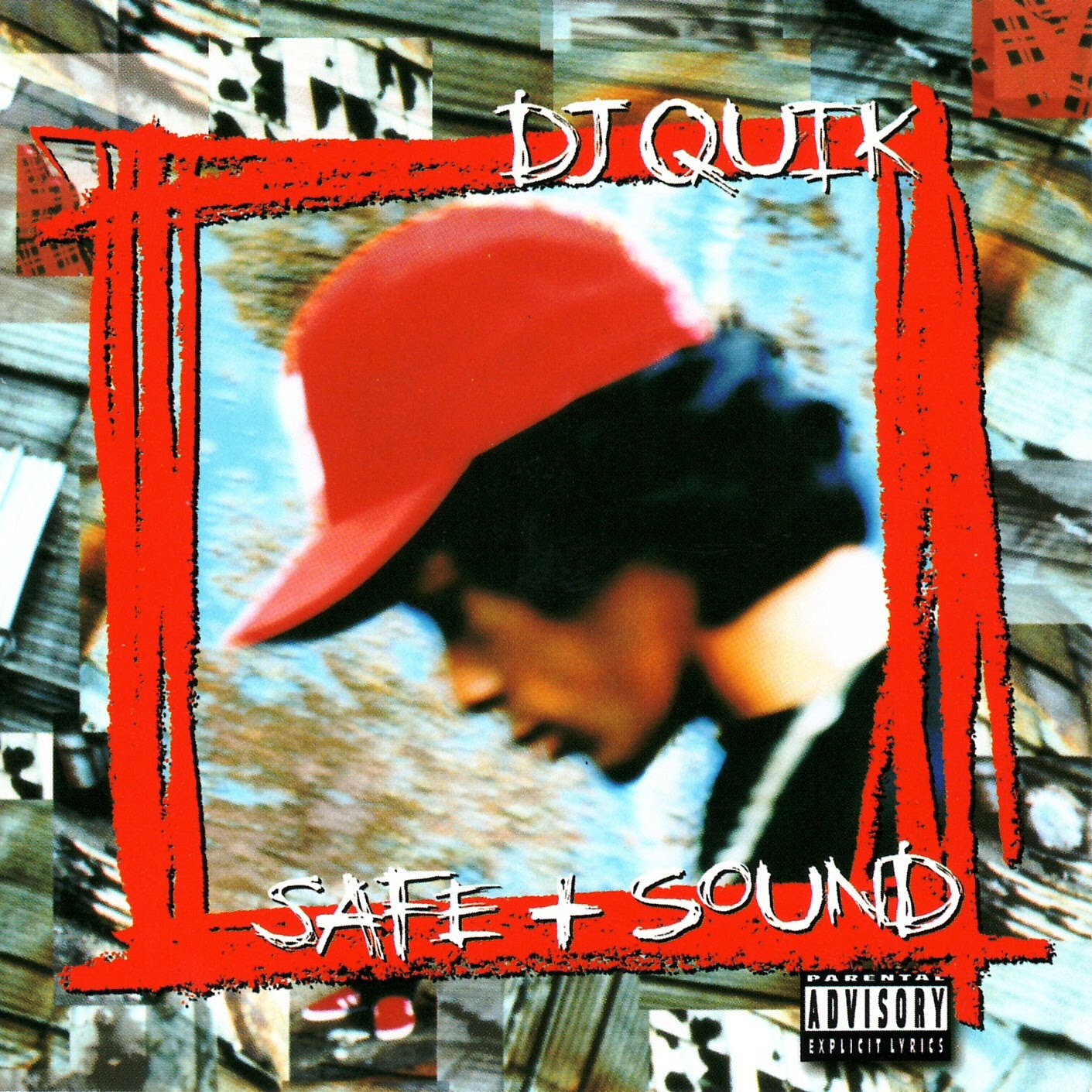 DJ Quik is an American rapper from Compton, Los Angeles known by his name because of his quick turnover when writing and producing songs. His third album, the seminal Safe + Sound, came out 1995, 22 years ago as of today (February 21).

The album cover’s simply Quik head down and studious. His cap is red and his hair is black, centred with graffiti style red lines framing his profile focal point of the cover. Red and black, of course, the hallmark of a Blood.

This reviewer very much came across Quik almost by accident. Having heard about the 1995 Source Awards, and how it almost represented the pinnacle of the West Coast/East Coast and Death Row/Bad Boy feud, I did a few YouTube searches.

What I came across was, in fact, an internal West Coast feud between Bloods and Crips. Up until that point, and I’m not trying to be partisan, it seemed all rappers were Crips. Whether or not they did this in the security that, generally, Crips were the bigger gang, is another issue entirely.

Anyway, during a Death Row medley Quik, the main support for the headlining Snoop Doggy Dogg, strides onstage with a red rag clasped around his fist and microphone hand as he reigns fury upon Crip, Compton’s Most Wanted’s MC Eiht, apparently in the audience, with an abridged version of “Dollaz + Sense”.

Indeed, this seeming kamikaze bravery negated the fact that, although Death Row was largely fronted by Suge Knight and his Blood henchmen, Quik was surrounded by fervent Crip rappers. He called out Eiht, describing him variously as his fiancé, enemy and, rather incendiary, stepson.

Although I came across Quik almost by accident, I’d been familiar with Compton’s Most Wanted and MC Eiht for many years, mainly through borrowing a copy of my neighbour’s Music To Driveby. It seemed criminal I’d known the aforementioned for so long, but not Eiht’s greatest adversary.

After watching, I was dying to hear the unabridged version of “Dollaz + Sense”, the third verse becoming one of my favourite in the entire genre. Then I got the album in question, which still remains my favourite despite the fact that I then purchased the two that came prior and the one that came after it, aswell.

Starting things, you’re greeted with a “Street Level Entrance”, which’s a funky entrance, indeed. This seems, just under the two minute duration, to be a short mission statement, West Coast synth weaving its signature sound over the top of Quik’s proclamations.

Then “Get At Me” is also funky, but maybe a bit more uptempo. Horns lend a triumphant air to the chorus, with plenty of scratching, too. “You should’ve been a pigeon ‘cos you duck so well/But next time I’ma catch you I’ma pluck your tail” no doubt a sexual reference along with, “…and stop y’all b*tches from steady tryin’ to ride on my mink/And start bathin’ more than once a week”.

“Diggin You Out” is kicked back, but maybe more soulful than funky. A sensual backdrop for a consecutive sex track, with lines like, “…you knew the job was dangerous when you took it/You played your p*ssy like bait and let me hook it”, spat, overall, with expert speed. Some might recognise the same sample that’s used on Ready To Die (“Respect”), the debut from The Notorious B.I.G. Soulful piano within the track’s closing minute a nice touch, too.

“Safe + Sound”, is perfect for the title track. Again, a good mix of funk and soul. It’s quite an autobiographical one, talkbox the soundtrack to growing up and moving to Compton. That bass locks you in, moody, emphatic and grooving.

“From cluckers wantin’ a hit so bad they let their panties fall/Teeth rotten, hair gone, and whole cheques get blown” perhaps a cautionary tale to at least, if drug dealing, not got high on your own supply. “…believe in friends/But niggas like me believe in makin’ ends”. That talkbox proclamation of “Compton’s in the house” is deep, bassy and heady.

Then there’s the chilled “Somethin’ 4 Tha Mood”. This is another thick bassline centred track, coupled with what seems flute floating over the top. The latter very soulful. The clap of that drum really locks you in, head nodding moodily from left to right.

Proclamation is then followed by question in “Can I Eat It?”. Yes, it carries on that, er, filthy theme. A largely throwaway track is saved with some pretty cool aforementioned Roger Troutman esque talkbox in the chorus.

“It’z Your Fantasy” is still very much revolved around all sensual and sexual. The soulful, moody backdrop brings a bit of class to proceedings, even if heavy breathing and moaning permeates from time to time.

The rather blunt “Tha Ho In You”, featuring Hi-C and 2nd II None, is maybe a tad infantile, but, like the last, the soulful backdrop lends some, daresay, bluesy substance.

“Dollaz + Sense” is the arguable highlight. It kicks in with deep, rumbling, stomping bass. What seems like a cowbell effect, ringing in intermittently, really adds to an effect mixing oldschool percussion with West Coast stylings which, at the time, were at their peak. This was basically the crescendo to the whole DJ Quik and MC Eiht/Compton’s Most Wanted feud. Blood versus Crip:

“Now, I done sold my f*ckin’ soul to the sh*t that I kick/While you groupie ass n*ggas keep on ridin’ the d*ck/You oughta know that DJ Quik ain’t your average everyday motherf*cka/Slick like a snake ‘cos I stuck ya”. Then there’s the absolutely brutal, “…then you can tell me just how it taste/But before I nut I shoot some p*ss in your face, you f*ckin’ coward”.

The killing line, perhaps, comes with, “E-I-H-T, now should I continue?/Yeah, you left out the G ‘cos the G ain’t in you”.

“Let You Havit” has a sun kissed vibe; slow, funky and in somewhat of a haze. The bass is fuzzy and deep, the guitar simple yet emphatic. West Coast synth wails with signature vigour, strings adding a graveness and ambience to proceedings. The latter perhaps acknowledging that a gang feud is only ever around the corner, as good times are from time to time.

Evocative “Summer Breeze” seems to carry over from the previous, this time the guitar nowhere near as sparse. Constant, urgent but, most of all, moodily funky. It, as discussed, maybe tries to encapsulate sunny Los Angeles, and also the way of life for that area’s urban youth.

“Quik’s Groove III” is another highlight, an instrumental at that. It’s got soul and jazz, with harmonics ringing out mournfully. Piano sees the track out, expressive before what seems like flute ringing and fading out for the track’s end.

There’s a swagger in “Sucka Free”, and it’s quite a short one, featuring a cameo from a cohort of Quik’s. It’s funky braggadocio.

Cameo heavy “Keep Tha “P” In It”, featuring Playa Hamm, Hi-C, 2nd II None and Kam, is kicked back. The bass, again, is fuzzy, climbing and deep. This helps lock in the groove, the drums hitting almost industrially heavy.

Politically inclined Kam “…that’s just the Eastside way of gettin’ chips/When you’re raised up dealin’ with the dogs and the ‘rips”, thoughtful as ever. There’s rapid fire rap from Quik with, “Now back up in yo’ ass, again, it’s Mister Quik and I clowns/I got the shit that shake ’em down, break ’em down, take ’em down”.

The circle is almost complete with “Hooray 4 Tha Funk (Reprise)”. It’s a funky reprise, indeed. This seems, like the opener, another, quick mission statement, West Coast synth weaving, again, its signature sound over the top of yet more Quik proclamations.

Safe + Sound ends with a hidden track in “Tanqueray”. It has bass on a Bootsy Collins level. Lively, cyclical yet inventive, and ebullient. It seems to detail a house party of some sort, getting hammered on Tanqueray, and all the associated drama with getting drunk. You could suppose this ends the album on a celebratory, party mood note.

Highlights are “Street Level Entrance”, “Get At Me”, “Diggin You Out”, “Safe + Sound”, “Somethin’ 4 Tha Mood”, “Let You Havit”, “Summer Breeze”, “Keep Tha “P” In It”, “Hooray 4 Tha Funk (Reprise)” and “Tanqueray”. Particularly notable are “Dollaz + Sense” and “Quik’s Groove III”, the latter a feat for an instrumental. Only the sex tracks, if you will, are omitted.

This was more or less put out at the height of the West Coast g-funk prominence. It perhaps helped pioneer the genre’s use of the talkbox, maybe yesteryear’s autotune, which came from Roger Troutman via Pete Frampton. The seeming focus on instrumentation, opting for so-called p-funk rather than the aforementioned variant, helped make it unique. DJ Quik’s Safe + Sound can be heard on iTunes here.