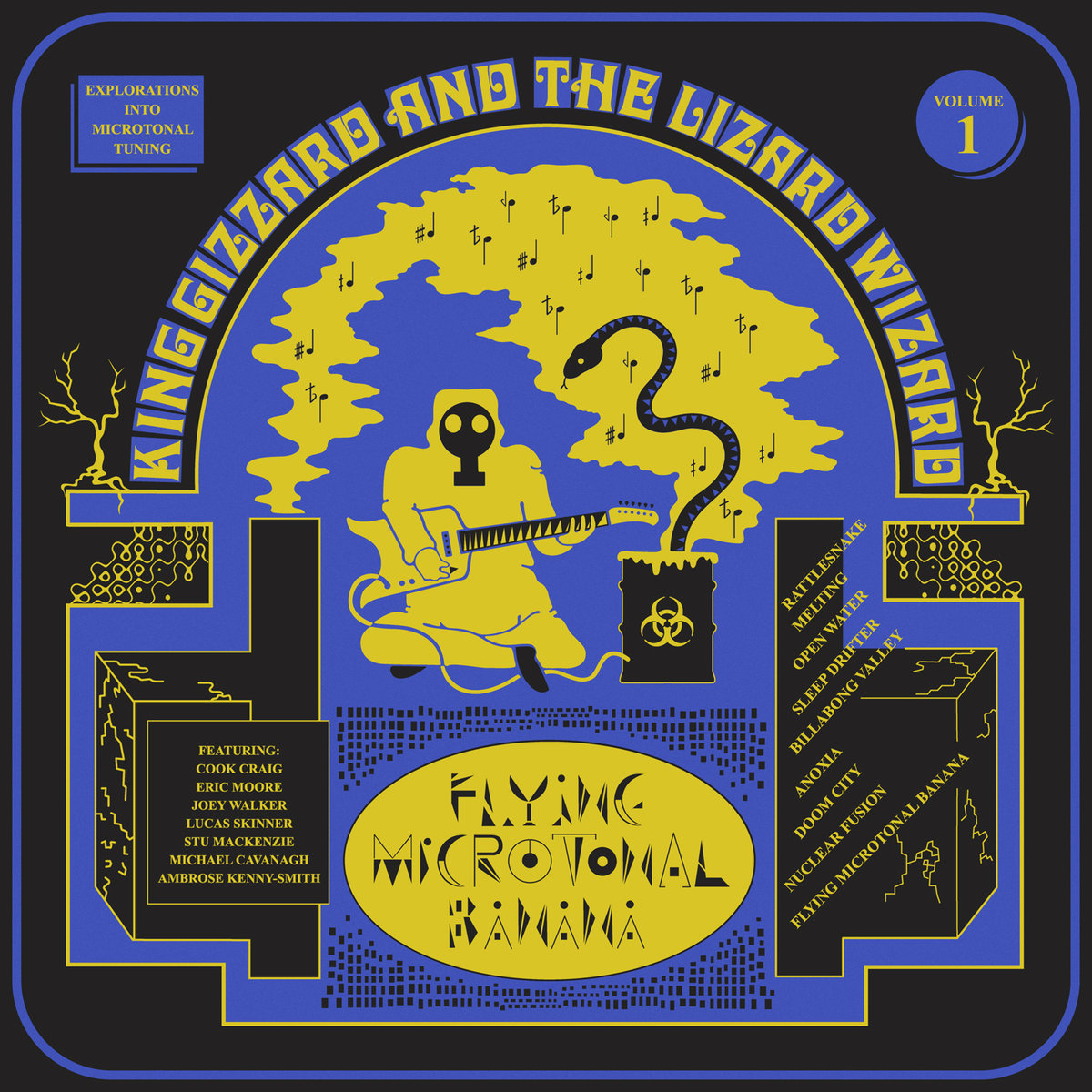 It goes to show how deeply attuned people have become (forgive the pun) to Western harmony, the fact that listening to King Gizzard & The Lizard Wizard’s latest album, Flying Microtonal Banana, blagged my brain a tiny bit to start with.

The Aussie psych rock band’s latest creative endeavour uses Eastern microtonality, whereby the octave is split into double the amount of intervals (N.B. 24-TET is the technical term, and 12-TET is the term for standard Western tuning, for what it’s worth). The effect is music that sounds somehow three-dimensional, brighter, unsettling, and (once the fret board in my mind caught up) very very satisfying.

This band are no stranger to the strange and dedicate themselves admirably to the pursuit of new sounds. They’ve been known to go to some unusual and often ad hoc lengths to achieve such goals – for instance, 12 Bar Bruise, their 2012 album, features vocals captured on 4 iPhones placed on the floor.

As well as their creative resourcefulness, they boast a diverse set of instruments – namely, flute, zurna, theremin and sitar, teamed with a 12-stringed guitar, synth and two lots of drums. This album sees them continue to delve beyond the norm whilst remaining slick and directional. Flying Microtonal Banana fuses Eastern gypsy-folk with bizarre musical calculus with the psychedelic with the just plain strange, and is wonderfully executed: the most well-ordered chaos about.

On top of microtonality, this record plays with time signatures in that special Gizzard way; melodies and rhythmic parts interlock mathematically and at times seem to almost fall over themselves (but provide the ultimate satisfaction when they get back up before I do, every time). It’s somehow satisfying as hell when bread-and-butter, 4/4, even riffs are suddenly snatched away by the clutches of mismatched time signatures and tempos.

The titular track has that just-about-to-fall-out-of-kilter-at-any-second vibe that really messes with you, and messes more still so when a wailing Turkish horn paints intervals so close and painful Gizz could go down for assault of the mind (if that were a thing). There’s something almost masochistic in the way you attempt to keep a running calculation of the rhythm only to be proven wrong every damn bar; with the depraved confusion comes delight.

Lyrically, in the past the band have dealt with some gritty concepts – their 2014 album, I’m In Your Mind Fuzz deals with mind control as a central theme. However, this record (and Gizzard generally) are mainly all about the satisfying rhythmic car-pileups created by the way they use the words to be their respective syllables rather than their meanings.

For instance, “Melting” abuses the normal scan of syllables so the lyrics play the part of a rhythmically rising gypsy-esque scale and warp the title word itself beyond all meaning (appropriately for a word that literally means a change in physical state).

Amidst all this mental, mathematical interplay between instruments, “Sleep Drifter” features a more conventional approach to melodic structure, its riff feeling like a concrete building block that develops centre-stage (but still hypnotically).

“Billabong Valley” creates a similarly sinister atmosphere, the guitar mirroring the vocal in unsettling unison. The wail of a Turkish horn evokes a opium-fogged snake charmers’ den until they funk it up with descending rhythmic thirds and give it that special Gizz energy.

As an extra treat, the album plays in a continuous loop, like their 2016 album, Nonagon Infinity. This nice touch turns the record into a world of its own – you could get totally lost in it for the rest of your life if you didn’t have a lot else on. Having listened to it a few times, I might get a couple things cancelled and do just that.

Out now on Flightless Records/ATO Records, King Gizzard & The Lizard Wizard’s Flying Microtonal Banana can be purchased on iTunes here.