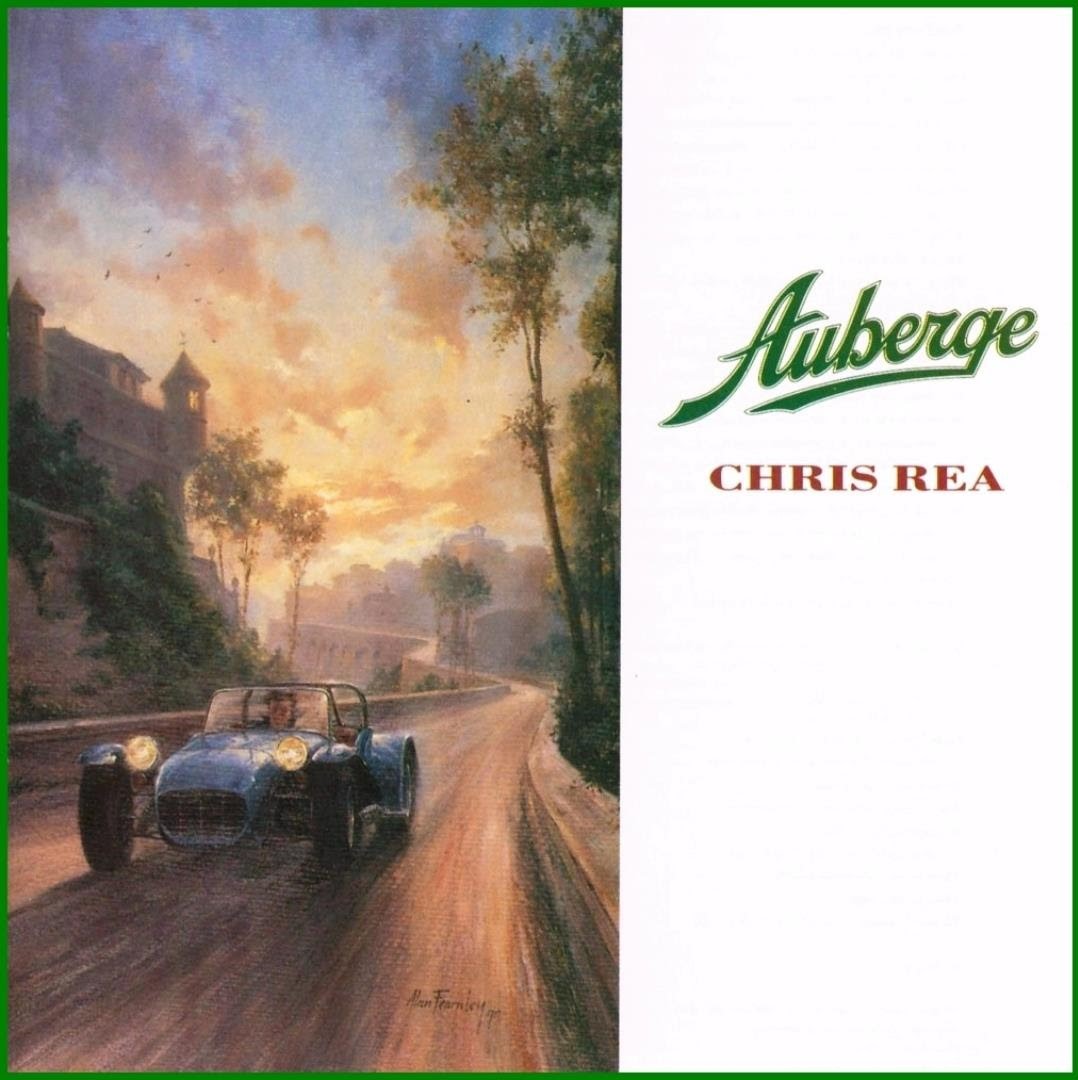 Back in March 9 of 1991, Chris Rea scored his second UK No.1 album with Auberge. The twenty-sixth anniversary of this, of course, coming up Thursday, March 9.

Released in wake of career highlight, The Road To Hell, it proved, along with the aforementioned, to be, as said, his second UK No.1 album.

Songs released as singles were “Heaven”, “Looking For The Summer” and “Winter Song”. The latter wasn’t available on Auberge until subsequent pressings of the album.

The album cover is an oil painting by renowned motoring artist, Alan Fearnley. This love affair with cars, particularly racing cars of a certain era, would prove to continue in 1996 movie soundtrack, La Passione. This, both music and film penned by Rea himself, featured significant vocal contributions from Dame Shirley Bassey.

The title track of “Auberge” begins things. It opens with walking and whistling, whistling indicating the main riff to the ensuing song. A bottle is kicked and skittles across the ground. A car is started and flourishes of guitar begin, hammering on and pulling off with a frenzy.

Keyboard weighs in, too, with harmonica and slide guitar giving a Deep South vibe. Stuck in the sticks destitute and nowhere to go. The main riff is reprised, this time properly on the guitar. Those gravelly vocals then make their presence be known.

There’s a certain bluesy country music, devil may care feeling to the whole proceedings. The guitar seems to constantly clamour for the limelight, loud and raucous. Its latter wailing confirms this, if not already established by the listener.

Then Rea’s “Gone Fishing”. This’s slightly more sedate, the title stating plainly the bent on the lyrical front. It’s calm, the bass ringing in intermittently with the drums. Light and pattering. “I know nothing about fishing, but just watch me go” seems to indicate reaching for respite no matter how outlandish the opportunity.

The slide guitar is both mournful, yet sleepy. Encapsulating relaxation. The closing minute perhaps lets the strings breathe and permeate. Guitar melody and strings sing as one for the fadeout.

“You’ve Not A Number” rouses the listener from previous slumber. The opening exchanges strive to establish burgeoning atmosphere before the drums lock you in with the ensuing groove. The general theme, of course, that you’re not a cog in the machine. Indeed, rousing you out of your conforming stupor.

Beautiful, delicate guitar, in tandem with organ washes over you, really striving for a higher level. Even the bass gets busy in the closing moments. No one in the band, indeed, there to serve someone else’s purpose.

Then “Heaven” is suitably ponderous and light of touch. Like heaven. The lyrics take on a whole new clarity with such an open soundscape. “Happy, boy, you bet I am” conveying real joy. “Holding onto this smile as long as I can” really savouring the moment. The last minute has some exploratory moments, reaching skywards with some slide guitar.

The pleading of “Set Me Free” fares with licks of guitar, individual notes dainty and pure. “When was the last time you saw a smile?” maybe a contrasting sentiment from the song before. This emboldens, as if to search for meaning and satisfaction in life. A refrain sees the piano take centre stage, a beautiful melody as if to break free of the kind of chains talked of in “You’re Not A Number”.

Suddenly, things are grave and urgent, as if discovering a new sense of purpose. Wails of lead guitar, maybe screaming into the night, take hold. Flighty strings build and build a grave cacophony and grandness as if true ascension has been achieved.

“Red Shoes” is a trumping, deep and bassy track. Drums get some time of their own before Rea’s earthy vocals tell a tale of dirt lined streets in his native Middlesborough. “…because I was left without a chance such a long time ago” elaborates upon the setting you should have in mind. This one really swings, almost as much as the title track.

The romantic “Sing A Song Of Love To Me” is a very tender, piano resplendent track. “…and I won’t be sad and lonely, anymore” touching and candid. Even minor details, like the bass climbing as the drum hits an emphatic transition, please the ear. Guitar, melodic and consumed with sadness really suits the proceedings. Whistling organ really finishes off that whimsical feel.

“Every Second Counts” has a certain reggae vibe to it, lilting with moody bass and the like. “He’s chasing his shadow, he’s racing the wind/He tells us to follow, where the ice is so thin” a proclamation to stay defiant and single minded, and to not be herded into the sheep mentality.

Reggae’s not complete unless there’s the trace of the rebel, indeed. The guitar, though, still thick and bluesy. A hybridising of elements that actually work surprisingly well. The chorus climbs as if reaching for joy. Strings then signal drama, difficulty and that not all is as it seems.

There’s the power to transport in “Looking For The Summer”, which patters in percussion, yet is actually quite hectic. Not loud, but suitably agitated as if looking for the needle in a haystack. It’s as if to literally endeavour for a now gone summer.

The organ whistles as the guitar, as expressive as ever, wanders mournfully. “…and still I stand this very day/With a burning wish to fly away” seems to basically proclaim that Rea wishes to leave for sunnier shores.

“And You My Love” has creeping octave run bass, really conveying intrigue and, perhaps, something amiss. “I do not sleep tonight, I may not ever/The sins of the past have come, see how they sit down together”, with the song title, perhaps conveys some sort of toxic bedfellow?

The guitar solo tries to break from this pain but, ultimately, its lines are plagued with this sadness and very much teary in their delivery. Chuntering strains of violin, like knives to the back, see the track out.

The closing track comes in the form of “The Mention Of Your Name”. “Time goes by, and every single tear it must have well run dry” really develops upon from the previous. Piano and tearful strings really pull upon the heart, as if to convey a monstrous tragedy.

The hero strived and strived and yet, still, doesn’t get their just desserts: “I’ve become so good at hiding/What I feel, without confiding/It’s still the same, darling, still the same/At the mention of your name”. Is this rancour at possibly never getting over a love closest to mutual infatuation, perhaps?

There are some big hitters on this album, with “Auberge”, “You’re Not A Number”, “Set Me Free” and “Every Second Counts”. These tracks are a good spread of the album, predominantly scattered and sandwiched between other, albeit very good, album tracks. Spelling these out as tracks one, three, five and eight illustrates this point.

Chris Rea definitely put out an album very much in the shadow of The Road To Hell. Listening to it, though, it’s fantastic he was able to put out such a strong effort to follow up such a career highlight. The commercial highlight of his career. Although two completely different albums, needless to say both stand well on their own for different reasons. Chris Rea’s Auberge can be bought on Amazon here.