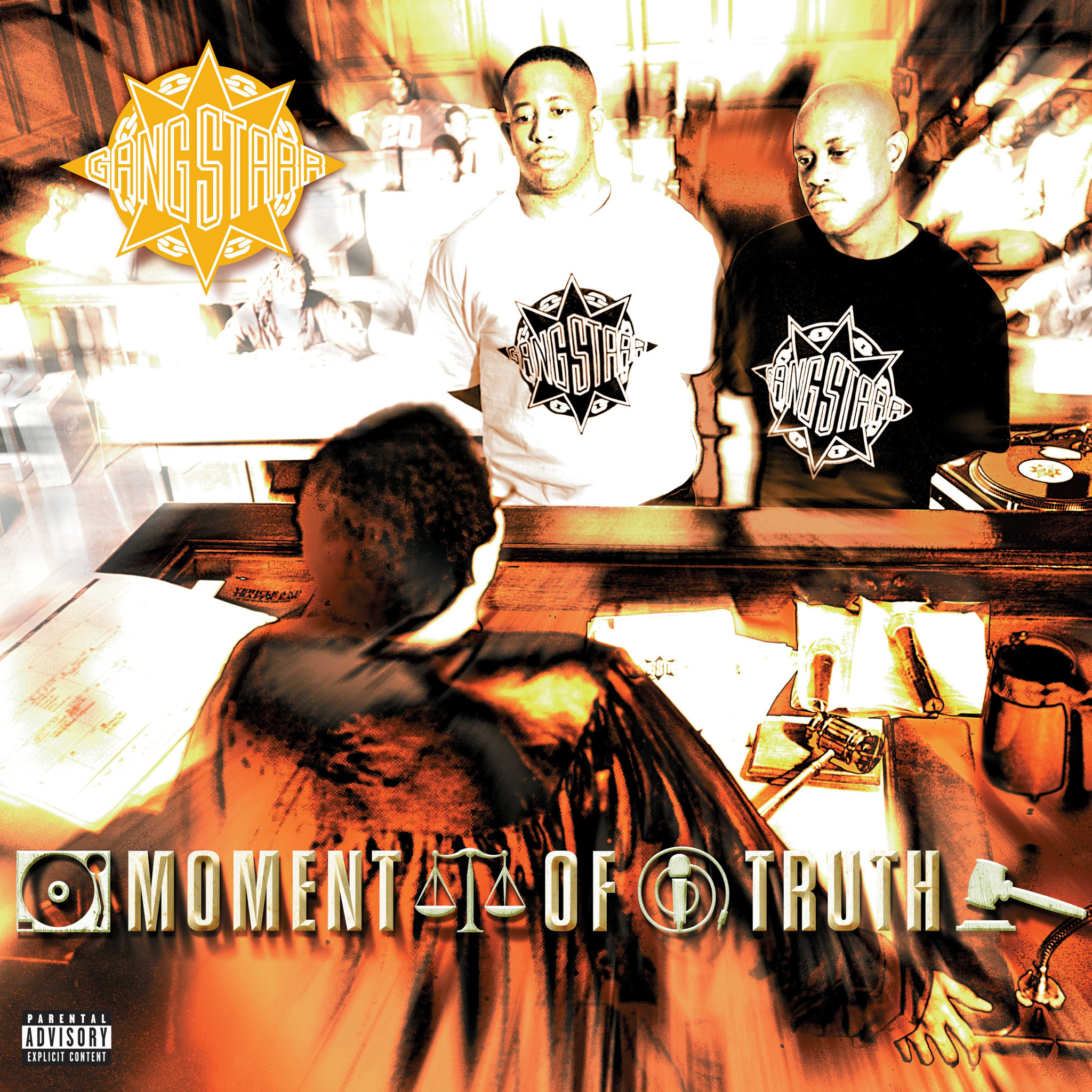 Released four years after their previous album, Hard To Earn, this album could be “perceived as a comeback, with a newer, updated style of the group’s already-established jazz-tinged hip-hop”, as Guru confirms in the introduction. Lyrically, the album is “more emotional and socially conscious than previous instalments”.

The album cover features the duo in front of a judge, the scales of justice pictured alongside the title of the album strapped along the bottom. Generally the picture is blurred, only the duo and judge are in focus. Is this the clarity of a definite not guilty verdict, the moment of truth?

It’s an emphatic introduction in “You Know My Steez”. This one opens with the aforementioned pontificating upon updating styles yet staying true to oneself before the song proper ensues. Gang Starr staying relevant through the ages and not compromising. It’s really kicked back, the song title’s hook sampling the one and only Method Man. “My style be wilder than a kamikaze pilot” belying his monotone flow.

The “Robbin Hood Theory” is a tad of social commentary. “The sins of the father will visit the children” opens the song true. “Squeeze the juice out, of all the suckers with power/And pour some back out, so as to water the flowers” encapsulates the subject matter of the track, detailing what he thinks needs to be done to redistribute the wealth in the industry.

“Work” is more upbeat, piano and triumphant horns heralding grafting braggadocio. These horns ring out almost dissonant as the end of the track approaches, with sliding piano providing the only sense of hope. Little by little hard work pays off, despite all obstacles?

The album takes another step with “Royalty”, featuring K-Ci and Jojo. It also features piano, but more intricate and delicate rather than the emphatic barroom music soundtrack of the previous. The cameo duo certainly add some silky yet heartfelt soul to the track.

Isolated drums close the track before DJ Premier rails against the trouble of sampling in the industry: “…so while you keep on fakin’ the funk, we gonna keep on walkin’ through the darkness carrying our torches”.

“Above The Clouds”, featuring Inspectah Deck, is suitably Wu-Tang. Far Eastern and mysterious. “Above the crowds, above the clouds; where the sounds are original/Infinite skills create miracles” hook from Guru then heralds Deck’s subsequent, “Wild like rock stars/Who smash guitars”. Classic, witty hip-hop. Memorable rhymes.

It’s coast to coast in “JFK 2 LAX”, which seems to be a real life tale of woe involving Guru. He recounts what happened with a positive retrospective spin: “It’s okay, though, ‘cos from grey skies comes blue/Through darkness comes light and I be known as the Guru”.

Then the proclamation of, “Of course, I know that I’m a role model”, lets you know he’s not entirely irresponsible and reckless. “Read, study lessons and build your inner power” makes sure of this. He talks of striving, how, “Or at least I gotta try/Or part of me will die”. “So I inhale, exhale as I ponder/This grown man will make mistakes no longer…from JFK to LAX”.

Intrigue is afoot with “Itz A Set Up”, featuring Hannibal Stax. It’s urgent and arresting. He details how both Pac and Big were personal friends, wishing to put East Coast/West Coast feuds to an overdue rest. The last minute or so perfectly cues the upcoming title track.

Titular track and arguable album highlight, “Moment Of Truth”, ensues: “They say it’s lonely at the top in whatever you do/You always gotta watch motherf*ckers around you…We all must meet our moment of truth”. Those thoughtful lyrics are complemented with a dreamy soundscape, as if to aspire to an extent that figuratively reaches for the stars.

“My only crime/Was that I’m too damn kind” also acknowledges fault in mercy and the like. “The king of monotone, with my own throne/Righteously violent prone my words bring winds like cyclones” delves into boasting, as if to lose aforementioned mercy, evolution of character and evolution of man.

“B.I. Vs Friendship”, featuring M.O.P, now. The beat is suitably thick for this one, absolutely stomping in typical M.O.P style. Bouncing off the walls for that particular duo, but somehow Guru manages to pull off his monotone flow without sounding totally inaudible. Scratching out with the question of friends or business.

The arresting “The Militia”, features Big Shug and Freddie Foxxx. This one’s equally amped, but more in the form of the fiery Freddie Foxxx than shouting vocals and rocking beat. The latter certainly steals the show, and it’s largely considered as relaunching his career and introducing his raps to a whole new audience: “…before I slide I’mma leave you this jewel/Even mechanics walk around with they tools”.

Then the swaggering “The Rep Grows Bigga” next. Speaking of reputation, drums are the soundtrack as a tribute to jailbirds doing stretches of all sizes. Grave piano then is amidst Guru laced raps pondering the pitfalls of maintaining reputation on the streets. “Take us out the game, n*gga, how you figure?/The name is well kept, and the rep just gets bigga” builds towards seeing the track out.

“What I’m Here 4” is a thoughtful one, the piano soulful adjoined with the snap of drum and the bob of bass. “Kick rhymes without rehearsal/I cross the burnin’ sands; now I stand here with virtue, of course I could hurt you” embodies the feel of being supreme and disciplined.

There’s then the thoughtful “She Knowz What She Wantz”. This one’s also laidback and very soulful, mournful as Guru debates his reasons behind the troubles with the women in his life; as extensive as, “One…two…three…four”. This then goes to, “But now I’m back like the Isleys/Movin’ wisely” as if to indicate rising from the ashes of your own destruction.

“New York Strait Talk” is a sparse arrangement, the drums locking in intermittent bass as Guru warns you that you don’t take New York seriously at your peril. Wah-wah guitar almost gives way to fat EPMD sampling bass but never surfaces. “They wanna shut us down, and I say, ‘Shut up, clown!’/’cos New York is too corrupt and too tough to lay down” tells you the city’s unimpeachable.

Guru then imparts “My Advice 2 You”. It’s soulful yet underplayed like the most relaxing of jazz numbers. It’s evocative of inner city New York street life and is mournful, as if to decry the state it’s got itself in. All this despite how proud he was of the mighty city in the track previous.

“Make ‘Em Pay”, featuring Krumbsnatcha, is more noticeably soulful with wah-wah guitar and soaring strings. Perhaps the more jazzy track prior was grounded in reality, and this one seeks to soar to the heavens? “Spreadin’ my gospel throughout electrical wires” a line that could match the cameo appearance made by the aforementioned Freddie Foxxx.

The following, “The Mall”, pales in comparison to the rest of a very strong album. It reprises the hardcore feel of the M.O.P featuring track prior, yet feels a tad throwaway in comparison to the more than solid tracks elsewhere. The premise appears to be going to the mall to spend money, whether ill-gotten gains or from being a bone fide rap star.

Big gun cameo, “Betrayal”, features Scarface. It’s moody, kicked back and ponderous. It shimmers and washes over the listener. It sees the two getting at least a tad philosophical. The drums seem to hit industrial, totally at odds with the predominantly sedate backdrop.

“Check the horror scene/The kid was like twelve or thirteen…” is a tragic line that may incur one to ask, is this a betrayal of the innate innocence of children? Scarface certainly swaggers, perhaps down memory lane, but does so in such a way indicating hard fought street knowledge rather than the arrogance of a braggart.

“Next Time” sees Guru swagger slightly, too. Jazzy horns suggest the perils of mortality. However, fortune favours those who strive to better themselves: “…’cos it’s never too late/To set this f*ckin’ record straight”. Scratches of “not this time, but next time” reinforces this message.

Death is as natural a transition in life as anything else for “In Memory Of…”. It chimes in melancholy like honouring the grace of the dead at a mournful wake. The recently deceased, at that time, Biggie, is sampled saying the integral words to the song’s hook, “Rest in peace”. They basically call out, amidst Guru’s raps, the names of the dead. Even our “Princess Di” Diana gets a mention, curiously enough.

Ones to check out on this effort are “Above The Clouds”, “Moment Of Truth”, “She Knowz What She Wantz”, “My Advice 2 You”, “Betrayal” and “In Memory Of…”.

Gang Starr’s Moment Of Truth can be heard on iTunes here.